AirAsia up, Qantas down. The conventional wisdom is that LCCs prosper in difficult times and network airlines suffer.

So it is perhaps no surprise that, in these troubled economic conditions, there could be no starker contrast between the outlook of AirAsia and of one of the region’s previously most profitable airlines, Qantas.

Qantas shares were not traded on Friday 10-Apr-09 or yesterday (13-Apr-09), but today’s announcement of severe cutbacks in the carrier’s operations and a profit downgrade – with perhaps more to come – will shake the market. In early trading today, the stock was down nearly 10%. But this may recover, as investors realise that losses may be reduced as capacity is steeply cut back.

Meanwhile, AirAsia shares, after a solid rise on Friday, gained another 6.4% yesterday. This is on the back of (as yet informal) media reports that the carrier increased its passenger uplift by 21% in 1Q09, in line with capacity. Load factors would therefore have been steady, although inevitably there must have been some yield dilution.

Against the dire predictions from Qantas, the contrast is stark. Instead of expanding, Qantas is cutting back severely – on both profits and on capacity.

Against a full year profit forecast of AUD500 million, made as recently as three months ago, the expectation is now for “between AUD100 million and AUD200 million.” Moreover, “The profit forecast range is subject to no further changes in market conditions, fuel prices, and volatility in hedge accounting results.”

Any such changes are unlikely to mean a revision upwards.

The carrier is effectively informing the market that it will make a substantial operating loss in the first six months of 2009 (2H09 for Qantas’ financial year), after having reported a net profit of AUD216 million in the first half of the financial year. 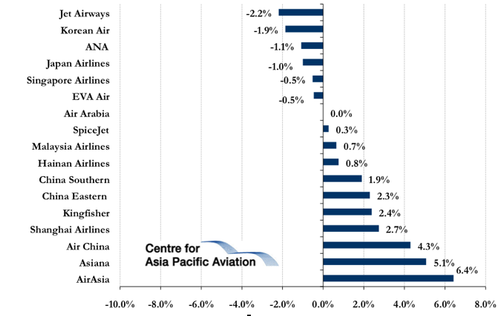 Source: Centre for Asia Pacific Aviation & Reuters
Note: Where the local share market traded on Friday, the moves are against that close. Otherwise the changes are against the last trade on Thursday 09-Apr-09
China Southern, China Eastern and Air China share prices are from the Shanghai Stock exchange

Other significant moves meanwhile were Asiana (+5.1%) an Air China (+4.3%), continuing its strong ride. Asiana’s rise came despite agreeing to pay a USD50 million fine for price fixing in the global cargo rate fixing conspiracy. However, Asiana will be allowed to pay the fine in six instalments, over 5 years.