IATA, in its Premium Traffic Monitor for Jun-2010, stated there was "another rise" in international passengers in Jun-2010, with the numbers travelling in premium seats 16.6% higher on a year-on-year basis, while economy traffic increased 9.5%. Despite this upward trend, which correlates with improved economic conditions, IATA warned that the pace of growth now appears to be slowing, following a “very strong” post-recession rebound in travel. 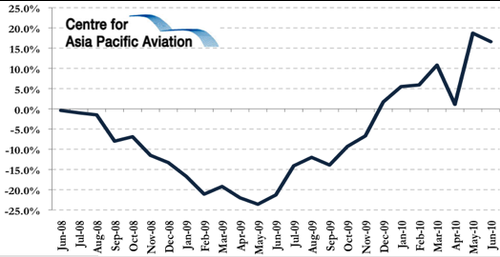 Growth rates weaker than in May-2010

These growth rates were a little weaker than in May-2010, in a month that contained a number of trips that had been postponed from April due to the European airspace closures.

Adjusting for the temporary impact of the European airspace closures shows that premium travel was expanding at an annualised rate of 9% in 2Q2010, while economy travel expanded at 6%.

During 1H210 – even with the losses due to airspace closures in Apr-2010 – premium travel increased 11.9% (removing the Apr-2010 distortion, the expansion is estimated at 17%), with a 6.3% gain in economy travel and total international passenger travel increasing 6.8%.

IATA commented that the strength of premium traffic demand compared with economy travel growth is a “sign that the travel market is continuing to be driven by business passengers”, with the industry association adding that “economy travel is now expanding in line with the trend growth rate seen before the recession”.

This pace of growth is slower than the first quarter and the second half of 2009, when air travel was “rebounding from the depth of the ‘Great Recession’”, although IATA added that they are “still very healthy rates of expansion at or above the pre-recession trends”. 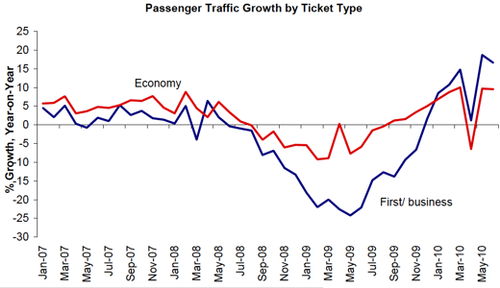 IATA estimated premium revenue in Jun-2010 increased by just over 40% year-on-year, for the highest growth in more than three years, due to the improvement in the number of passengers, a strong rise in the average fare and yield supported by tighter supply-demand conditions. 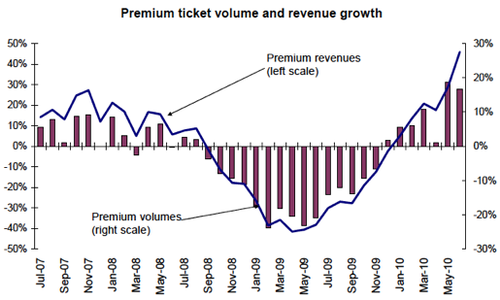 IATA commented that the “strong” business travel is “driving both market segments during this upswing”, with the demand being supported by coincident indicators like the strong of world trade (which increased 18% in May-2010). 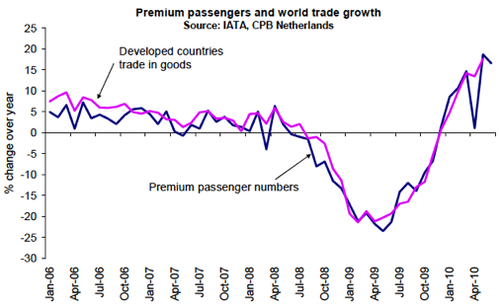 IATA said: “Forward-looking indicators such as business confidence have been similarly positive”.

“There has been some slippage in recent months which is consistent with expecting some deceleration in year-on-year travel growth rates in the second half of this year. Still weak consumer confidence suggests leisure travel will remain soft." 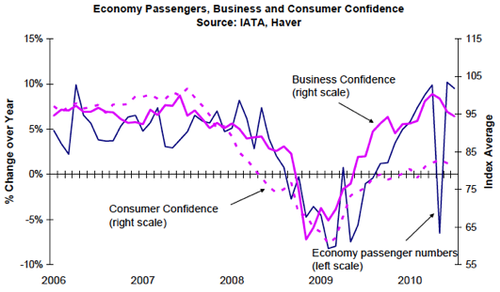 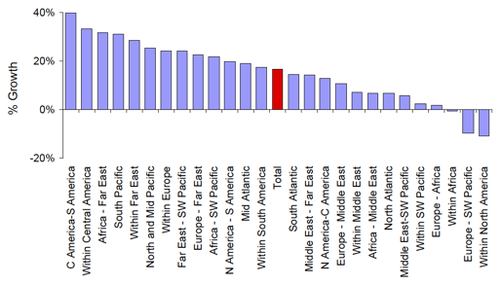 Asian and Middle East markets continue to show strong growth and rebound in premium passenger numbers, as do markets in South and Central America, while trans-Pacific and Europe-Far East continue to show strength on the back of business travel generated by strong Asian economic growth. However, trans-Atlantic travel, with the weak European economies at one end, continues to underperform and remain “sluggish”.

Meanwhile, the Far East market witnessed the highest growth in first/business and economy traffic growth in the month, although premium revenue and traffic shares have slumped throughout the year. 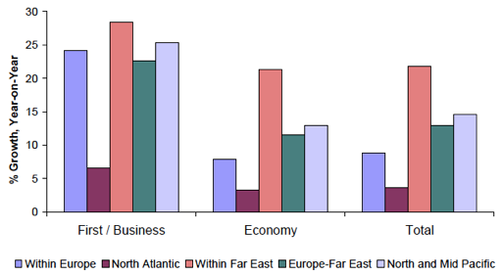 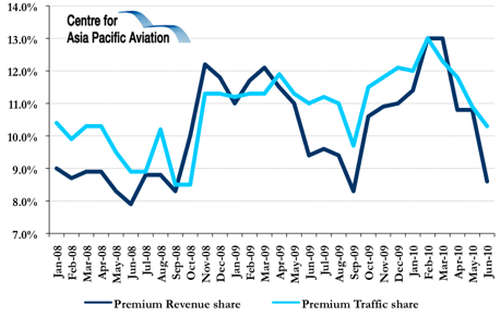 Cautious optimism but expect 'slowing' in months ahead

IATA has continually stated that it remains “cautiously optimistic” looking ahead, as business confidence improves. However, growth following an initial surge, is expected to slow in the month ahead, with the industry unlikely to be able sustain the strong momentum.