IATA, in its Premium Traffic Monitor for Jul-2010, reported a “strong” expansion in the number of passengers on international air travel markets in Jul-2010, with the numbers travelling in premium seats being 13.8% higher on a year-on-year basis and economy traffic increasing 8.8%.

Despite this upward trend, which correlates to improved economic conditions, the number of passengers seated in premium class is still some 8% below its pre-recession peak, although economy travel has rebounded to be around 3% above its pre-recession level. Meanwhile, growth trends are expected to moderate moving forward, as monthly comparisons now compare to rising number of passengers seen during the second half of 2009. 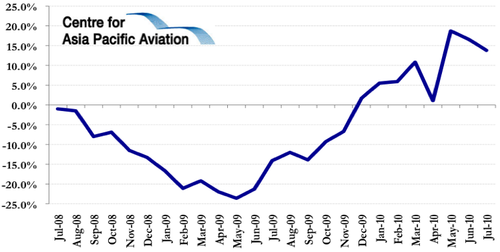 The growth rates in Jul-2010, while strong, are slightly weaker compared with growth rates observed during 1H2010, with the year-on-year comparison now against the rising number of passengers seen during the second half of 2009.

However, adjusting for seasonality and the temporary impact of the closure of European airspace, it appears that month-on-month growth in premium traffic was in fact accelerating (0.9%) in Jul-2010 compared with 2Q2010 levels (0.3%). This is an annualised pace of expansion of more than 10%. Similarly, the number of passengers travelling on economy seats grew by 1.4% in Jul-2010 compared with Jun-2010 levels, above the 0.2% average month-over-month growth rate observed during 1Q2010. 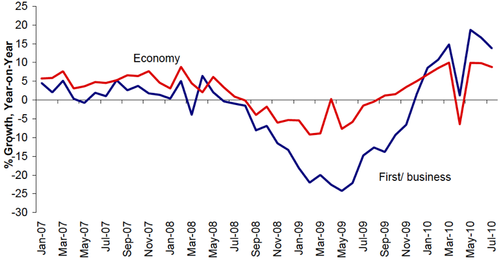 This prompted IATA to comment: “Clearly business travel still has considerable momentum, despite the economic uncertainties in western economies, although weaker business confidence points to some slowdown in growth rates ahead."

IATA added that in the month, growth in both seat classes continued to be driven by business travel rather than leisure. Indicators such as world trade and business confidence eased in Jul-2010 but remain positive, supporting the expansion of the premium market.

Meanwhile, IATA estimated that premium revenue contributed up to 27% of passenger traffic revenue in 1H2010 while passengers travelling on premium seats represented less than 8% of the total, prompting IATA to comment: “Clearly this market segment is key to profitability for most network airlines.”

Year-on-year premium revenues improved during 1H2010, albeit from the low point of the revenue cycle. This improved revenue picture continues to be driven not only by improvement in the number of passengers but also by a rise in average fare. During 1H2010, average premium fares for international travel, adjusted for seasonality, have been growing by some 8%. 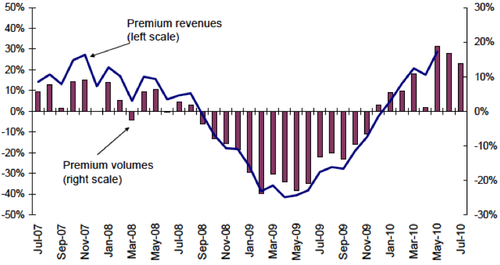 While year-on-year growth in premium passengers is now slowing, the drivers of business travel - such as world trade in goods for developed economies, which has been a good coincident indicator for business travel - remains positive, although there is uneven development in the premium market 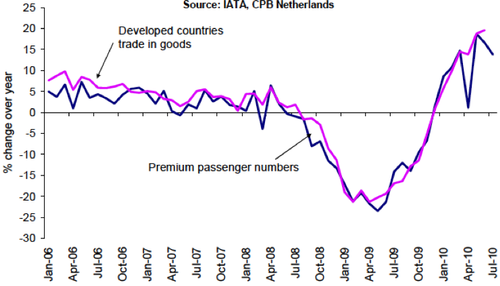 Meanwhile, consumer confidence eased in Jul-2010 and Aug-2010, affecting leisure travel demand, with IATA stating that growth in economy class continues to be driven by business travellers sitting on economy seats rather than holidaymakers. 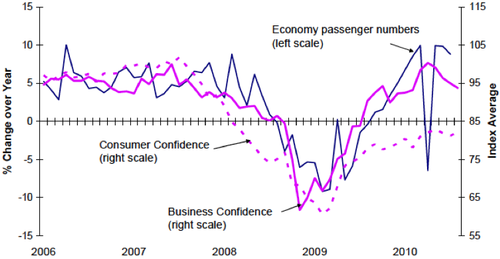 IATA added that regional differences remain in the premium demand recovery, largely reflecting differing economic conditions (with conditions stronger in the "emerging" economies compared with the Western economies), with the association stating persistently weak consumer confidence in the West suggests that leisure travel will remain soft during the second half of the year. 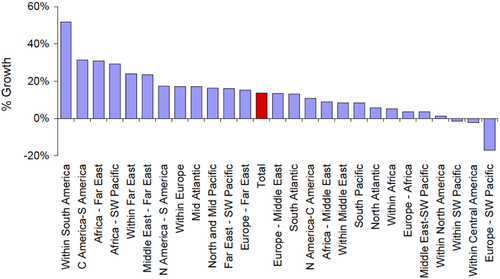 Meanwhile, the market within the Far East witnessed the highest growth in first/business and economy traffic growth in the month. Premium revenue and traffic shares have slumped throughout the year, with a pickup being seen in Jul-2010. 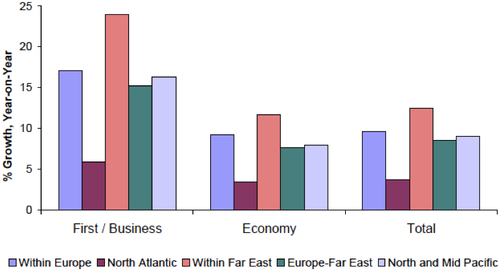 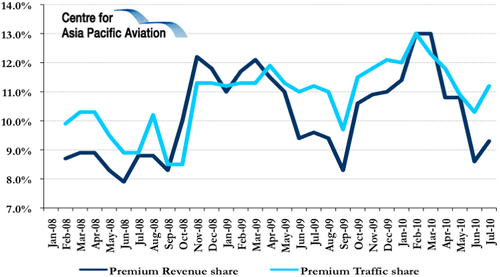 IATA cautiously optimistic but expects some slowing in months ahead

IATA has continually commented that it remains “cautiously optimistic” moving forward, as business confidence improves. However, growth following an initial surge, is expected to slow, with the industry unlikely to be able sustain the strong momentum moving forward.