Premium revenues down 35-40%, despite “early signs” of an upturn in premium travel demand

The International Air Transport Association (IATA) stated there are now “early signs” of an upturn in premium travel demand, although further improvements are likely to be “relatively weak”.

While Jul-2009 numbers are still “well below” levels seen in the previous corresponding period, slipping 14.1%, they represent an improvement from the 21.3% decline in Jun-2009.

IATA also warned that while premium demand has mirrored a bottoming out in world trade volumes since May-2009, an improvement in yields has not followed. As a result, average premium fares remain weak, down 23% year-on-year, with revenues from premium travel down even further, slumping 35-40% year-on-year.

Of concern for IATA and airlines worldwide is that there are no signs yet of corporate passengers willing to pay more for premium seats, with the problem further exacerbated by excess capacity in the market, producing “intense” competition among the airlines. 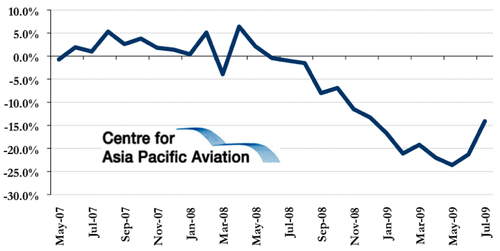 Falling economy demand bottoms out, but no sign of upturn in pricing

IATA, meanwhile, stated that the number of Economy travellers appears to have bottomed out, on rising consumer confidence and a trade down by business passengers, which has provided a benefit to the LCC sector. As a result, passenger numbers in the Economy segment were down just 1.2% in Jul-2009, a marked improvement from the 5.5% contraction in Jun-2009.

However, as is the case for premium demand, average economy fares have seen “no sign of an upturn”, with a decline in average Economy fares of 18%, according to the most recent data. Economy fares have been in free fall Feb-2009, meaning that “revenues are improving at a much slower pace” than demand improvements.

According to IATA, the Asia Pacific region has been the “hardest hit” by the recession, with passenger numbers still a long way down on 2008 figures, although the improvement between Jul-2009 and Jun-2009 was “marked”.

There was also a sharp improvement across the Pacific, including a large percentage gain from premium travel (from -27.9% in Jun-2009 to -17.5% in Jul-2009), as swine flu concerns diminished.

While markets connected to Europe improved in Jul-2009, IATA expressed concern that improvement in premium travel has been less marked. IATA added that the recession looks like a “further racheting down the structural decline already seen in premium travel” within the Continent.

There was, meanwhile, a further improvement in economy passenger numbers travelling to/from the Middle East in Jul-2009, according to IATA. However, of concern for the region is that the Middle East share of premium revenue has not recovered from its slump over the past few months. 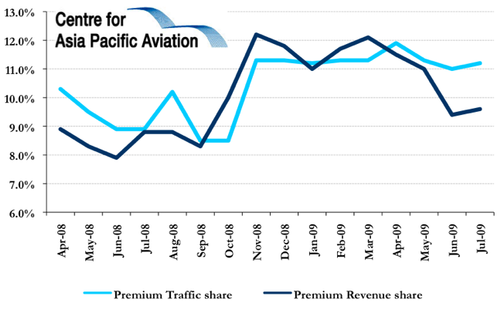 According to IATA, further improvements are “likely”, although there is a “long way to go before activity returns to levels seen in 2007 and early 2008”.

This slow pace of recovery is likely to be further exacerbated by “considerable excess capacity” and an increased price sensitivity among business travellers, which will continue to place extreme pressure on yields.

This scenario has forced IATA to upwardly revenue is industry losses by USD2 billion to USD11 billion for 2009 earlier this week.