IATA has warned that “widespread” declines in international trade and business confidence is having a notable impact on global air travel demand, including in India and China. “Forward-looking indicators for air travel, particularly travel on business, continue to point to a further slowdown in the months ahead,” the trade group said.

International business travel fell sharply at the end of Aug-2011, following an unexpectedly strong start to the month. Premium passenger numbers rose just 2.3% in Aug-2011 on a year-on-year basis, following growth of 7.5% in Jul-2011, with premium travel falling back to levels last seen in 4Q2010. Correlating with the decline in premium traffic volumes, there was also a marked decline in premium revenues in Aug-2011, which declined to the lowest levels in 16 months. 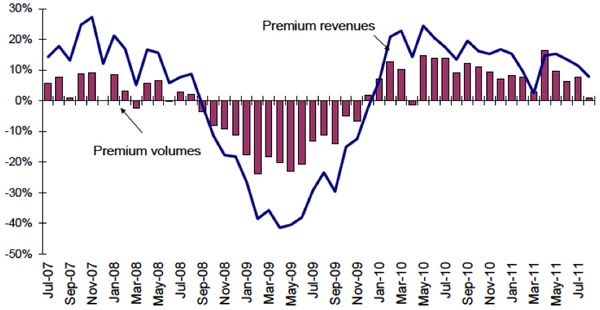 Economy travel was not as severely affected, with the growth rate declining from 5.5% in Jul-2011 to 3.7% in Aug-2011. Economy travel markets remain slightly higher than 4Q2010 levels, but less than 1% up on 3Q2010 levels. IATA noted that this was a probable reflection of "some switching of seat class by business passengers" to economy. 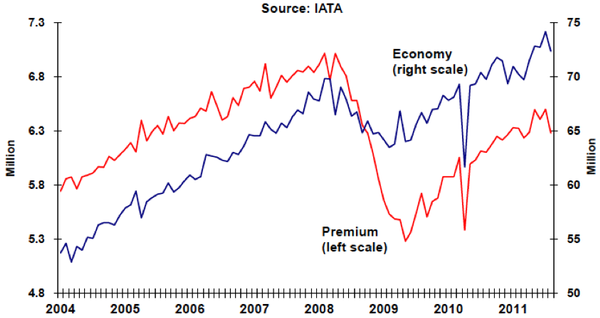 IATA said that while there has been a “significant” rebound in premium travel after the 2008-09 recession, “there has clearly been a structural shift, due to the severity of the recession, away from travel on business and first class seats towards economy”.

Prior to the recession, premium travel made up 9-10% of the international total, with this declining to the 7.5-8.5% range. This also reflects an increasing movement towards premium economy, which IATA includes as part of the ‘economy’ category. “In recent months, that structural downshift has been joined by the start of a new cyclical downturn,” IATA said.

Premium passengers as a percentage of the total (seasonally adjusted): Jan-2004 to Aug-2011 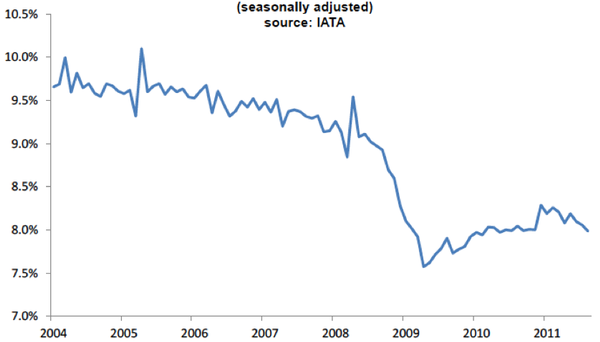 IATA stated premium travel growth was “much more aligned with international trade and business confidence” in Aug-2011. The global manufacturers purchasing managers index fell below 50 in Sep-2011 for the first time since mid-2009, indicating no growth or declining industrial production. This weak level of business confidence is usually consistent with little or no growth in premium travel volumes, IATA commented, adding that this points to a “further weakening of premium travel during the months ahead”. 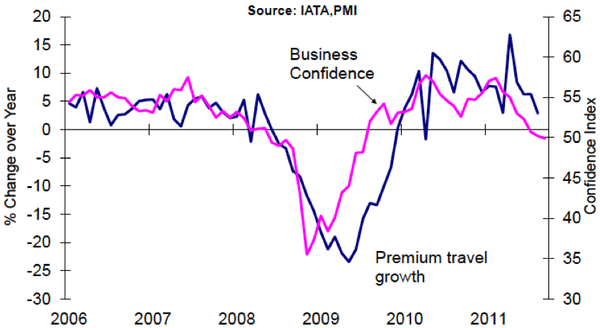 IATA also noted the global nature of the weakness. "This weakness in a key driver of business travel is widespread, affecting even the Chinese and Indian economies" where the confidence has "fallen sharply in recent months”. It added the major source of weakness appears to be Europe, where economic conditions and business confidence have "deteriorated sharply". 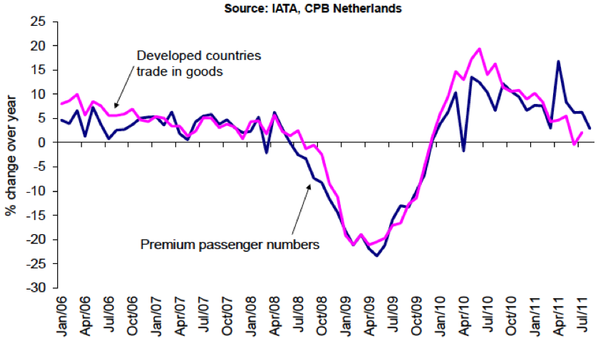 According to The Conference Board, the “severe deterioration in business confidence and stock prices” in the euro zone continued in Sep-2011. “The sovereign debt crisis and the uncertainty concerning its resolution are beginning to dampen current economic activity and the immediate outlook. The prospect of a banking crisis and increased fears of recession are self-reinforcing and an economic contraction cannot be ruled out in the very near term,” it warned.

In the US market, The Conference Board separately noted “the pessimism that shrouded consumers last month has spilled over into Sep-2011”. Consumer expectations, which plummeted in Aug-2011, remained weak in Sep-2011, with consumers’ assessment of current conditions declining for the fifth consecutive month, “a sign that the economic environment remains weak”.

In China, The Conference Board noted that while economic expansion is expected to continue through the end of this year, the rate of growth has “tapered off noticeably” with economic indicators suggested “the rate of economic growth will be slower in 2011 than last year.” Based on China Statistics Bureau data for 3Q2011 released on 18-Oct-2011, China’s GDP increased by 9.1% in the quarter, marking the slowest pace since 2009, adding to concerns about global economic conditions as Europe’s debt crisis deepens. The Conference Board also noted that trends in Japan “suggest that economic activity will remain weak in the near term”.

The IMF last week warned that the escalation in Europe’s debt crisis could impact Asian economies. “An escalation of euro area financial turbulence and a renewed slowdown in the US could have severe macroeconomic and financial spillovers to Asia,” it said. “Since 2009, investors from advanced economies have built up substantial positions in Asian markets. A sudden liquidation of these positions could trigger a loss of confidence, and contagion could spread from bond and equity markets to currency and other markets,” it added. The IMF noted that Asia’s growth has slowed since 2Q2011, resulting in a cutting of its forecast for 2011 expansion to 6.3% from an earlier estimate of growth of 6.8% made in Apr-2011.

In India, Moody’s Analytics this week stated India's slowing economic growth is a "cause for worry". India's growth would slow from an expected 7.8% in 1H2011 to 6.5% in mid-2012, it forecast. Compared to China, "India presents a more serious cause for worry" as its economy "is slowing sharply”, it added.

Reflecting the economic trends, aviation markets within Europe and the North Atlantic saw the sharpest declines in premium traffic in Aug-2011, with IATA adding there was "a sharp fall" in the number of passengers travelling on premium seats after an "unexpectedly robust growth" in 2Q2011. On the other end of the spectrum, the strongest flight segment so far in 2011, out of the larger markets, has been within the Far East, supported by the strength of Asian economies and trade flows within the region. Premium travel growth remained strong on these markets in Aug-2011, IATA said. 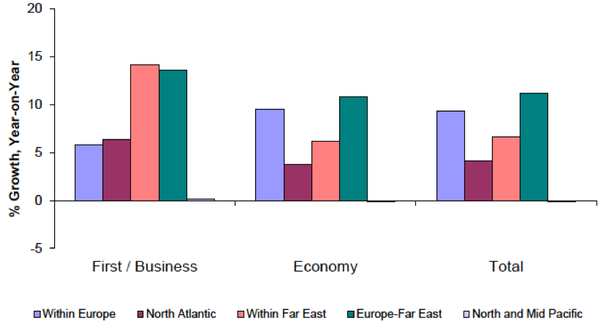 South America has been a very strong market, reflecting the strength of trade and economic growth in the region. Growth remained positive within the region in Aug-2011, but it did slow markedly. Travel between North and South America also slowed, but this premium travel flow remained stronger than travel within the South American market 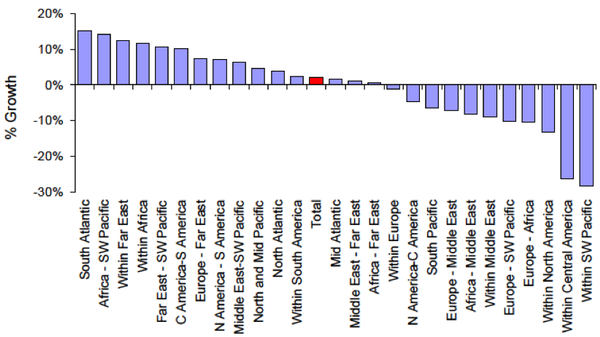 Deteriorating consumer confidence and weaker global economic growth prospects are again having an impact on the world’s airlines and forward-looking economic indicators point to a slowdown in late 2011/early 2012. Freight market trends are also concerning, particularly from manufacturing hubs in Asia. The outlook for the global air freight industry has also softened in recent months. 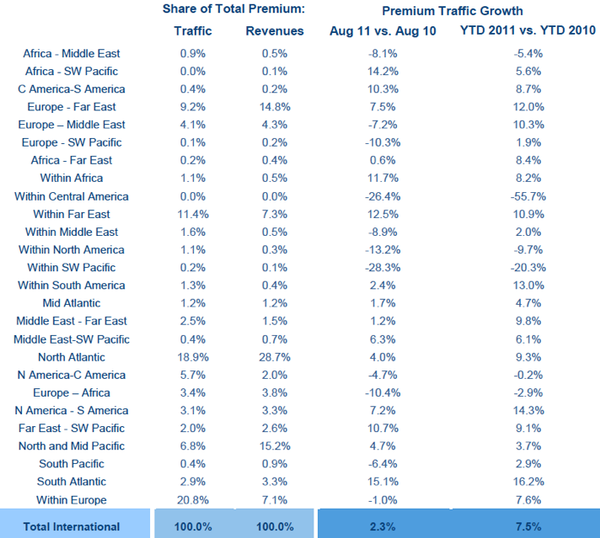