IATA expects premium travel demand to remain “soft” over the next few months with fuel costs continuing to weigh on economy travel. Premium travel numbers in Apr-2011 continued to be affected by recent shocks to demand in Asia and MENA, with a stronger second half being dependent on economic growth holding up, IATA said. 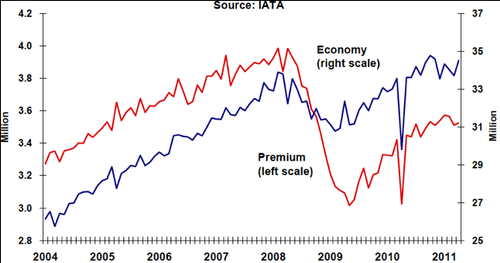 According to IATA, average premium fares are still 15% below their pre-recession levels. Premium revenues, meanwhile, increased by around 15% in Apr-2011, largely due to the comparison with a weak April in 2010. Adjusted for this distortion there was a growth in revenues between Mar-2011 and Apr-2011. However, the pace of improvement has slowed as the improvement in both premium passenger numbers and premium fares has levelled off. 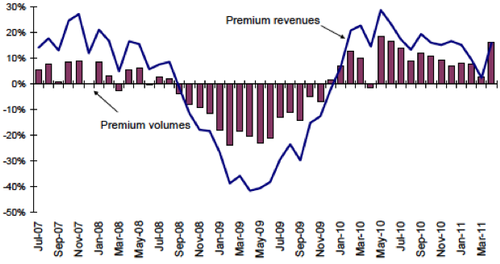 As is usually the case, passenger yields have shown a mixed picture between regions. US airlines have seen a sharp rise in yields on international markets in Mar-2011 and Apr-2011 up to levels that are now higher than the peak of the pre-recession period. The rise in average fares, excluding surcharges, has however been weaker, with the underlying fares now appearing to be levelling out. IATA stated that this may be a response to falling load factors but also a mix effect as passengers switch to cheaper seats. “Since the major rise in fuel prices following the third quarter of last year, airlines have increased premium fares by more than economy – seeking to recover costs in the less price-sensitive market segment,” IATA noted.

Size of premium market 1.3% smaller than at beginning of 2011

There was only a small rebound in the number of passengers travelling on premium (business and first class) seats during Apr-2011, after the sharp decline in Mar-2011, which was due largely to the situation in Japan. The size of the international premium travel market is 1.3% smaller than it was at the start of this year with IATA estimating that until reconstruction in Japan gathers plan, international premium travel markets will remain around 1% weaker than they would otherwise be.

Growth in the number of passengers travelling on premium seats continues to move very closely in line with international trade growth. Business confidence has weakened in other economies, particularly the US, with world trade also slowing. As a result, IATA expects softer business travel growth will extend into the next few months, meaning 2Q2011 will remain weak, although IATA expects premium travel to pick up in 2H2011. 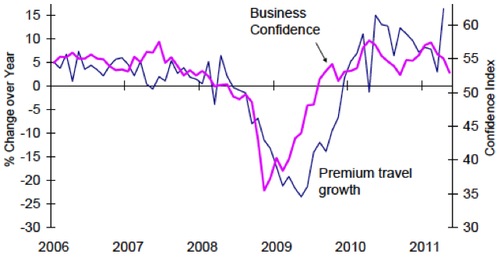 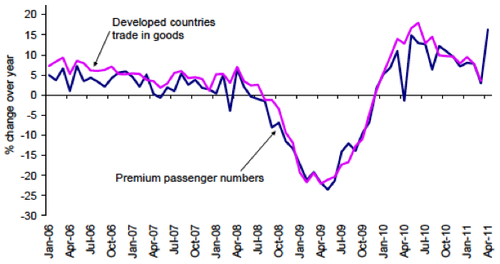 Comparisons with Apr-2010 were distorted by last year’s Icelandic volcanic ash cloud event. Although there was just a small rebound in premium travel between Mar-2011 and Apr-2011, the year-on-year comparison improved dramatically from 2.9% to 16.3%. Stripping out the distortions, IATA estimates that annualised growth in premium travel has slowed from 5-6% in 2H2010 to around half that pace so far in 2011.

Economy travel now 3% higher than at start of 2011

On a more positive note, there has been a large rebound in economy travel, which is now 3% higher than the start of the year, though still down on the levels reached at the end of 3Q2010.

This more price-sensitive travel segment had fallen 3-4% since Nov-2010, as leisure travel was discouraged by the major rise in fuel prices and the impact that had on travel costs. The better performance of premium over economy between Nov-2010 and Feb-2011 is evidence that high fuel prices are damaging price-sensitive air travel demand, according to IATA. However, the rebound in Apr-2011 rebound suggests this damage “may be a little less than feared”.

As has traditionally been the case, there were large regional variations in year-on-year growth rates in Apr-2011, although in Apr-2011 this was mostly a reflection of European airspace closures during the volcanic ash cloud event last year. All the three large route areas connected to Europe (within Europe, trans-Atlantic and Europe-Far East) were 20-30% up on Apr-2010, reversing a similar decline this time last year. 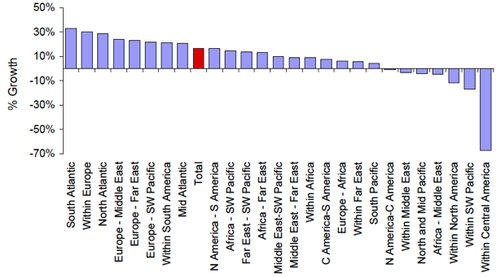 By contrast the north and mid-Pacific route area, and "within Far East" travel, was damaged by the 11-Mar-2011 earthquake and tsunami in Japan. The softening of activity recently in the US economy was also a contributory factor to the larger fall in transpacific travel. Some of the Asian economies, such as India, were still generating strong business activity and travel in Apr-2011 allowing premium travel within the region to hold up more than economy or transpacific travel.

Within Europe and across the Atlantic there are also contrasts developing, in particular between strengthening business travel out of growing European economies such as Germany and France and the slump of consumer confidence and passenger numbers originating from those economies facing recession such as Greece, Portugal and Ireland.

In the other region, strong growth continues in South America with premium and economy travel rising at a pace of close to 20% for international travel within the continent. Premium travel in particular was also strong between South and North America and across the mid-Atlantic to Europe.

In the Middle East, strong oil revenues are driving accelerating economic growth in the region and there is considerable investment in tourism. Nonetheless, a large proportion of the passengers on the Europe-Middle East and Middle East-Far East segments are long-haul connecting passengers. The Europe segment was boosted by the comparison with volcano affected April last year, while the Far East segment was weakened by events in Japan. Underlying these numbers is still strong growth showing success in attracting long-haul passengers to connect through the Middle East. 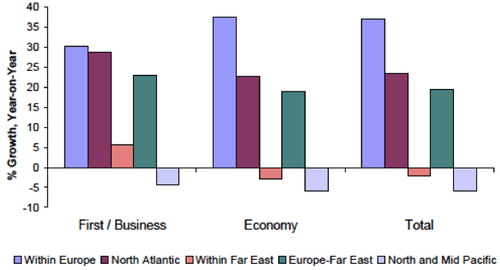 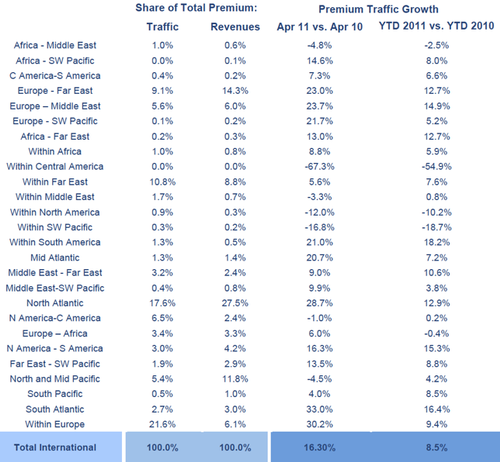