Tanzania’s largest carrier, Precision Air has belatedly reported a TZS30.5 billion (USD18.9 million) loss for the financial year to 31-Mar-2013, compared to a TZS633.8 million (USD392,814) profit in the year prior. The poor result is largely due to Precision’s over-ambitious expansion during FY2012 which saw the carrier lease three Boeing 737-300s to operate regional routes, including Dar es Salaam to Johannesburg.

The situation has been compounded by a disappointing initial public offering in Nov-2011 which raised less than half the TZS28 billion (USD17.3 million) sought to pay for Precision’s fleet and route expansion plans. The carrier listed on the Dar es Salaam Stock Exchange (DSE) in Dec-2011. The arrival of LCC fastjet on two key domestic routes, forcing down fares, has also had an impact.

Precision is now urgently seeking a USD32 million bailout from the Tanzanian Government and other investors to meet bank and aircraft loan payments. A request to the government for a USD4 million capital injection was reportedly rejected earlier this year. But the government could be persuaded to take an equity stake in Precision to ensure air access to outlying regions is maintained.

Revenue increases on back of higher demand

The cost of sales grew 26.4% to TZS147.9 billion (USD91.7 million) due to increased fuel and equipment related costs. Aircraft maintenance costs doubled to TZS23.6 billion (USD14.6 million) attributed mainly to high maintenance associated with the leased 737-300 fleet. The gross profit margin declined to 18% from 28% in FY2012.

Precision missed several extended deadlines to file the result with the DSE, reportedly due to issues relating to the auditors.

Under the DSE regulations annual accounts must be filed within three months of balance date. This means Precision was supposed to have filed its accounts by 30-Jun-2013 at the latest. Reported assurances to the DSE that the accounts would be filed by 25-Jul-2013 also passed with the carrier reportedly stating the delay was due to “some unresolved matters arising with auditors” Ernst & Young.

Ernst & Young raised concerns in the FY2012 annual report, without qualifying its opinion, over Precision’s ability to continue as a “going concern”, pointing to the carrier’s current liabilities which exceeded current assets by TZS31 billion (USD19.2 million). The auditor stated that this along with other matters “indicate the existence of a material uncertainty that may cast significant doubt about the Group’s ability to continue as a going concern without sufficient cash flows being generated to fund its operations”

The current liabilities largely related to interest bearing loans and borrowings used to fund a fleet modernisation programme which were financed by Citibank and Finnish for Industrial Development. Precision ordered seven new ATR aircraft in 2006, the last of which arrived in Sep-2010.

Precision's regional network growth in 2011 and 2012 had also been too ambitious, including leasing three Boeing 737-300s to operate new routes from Dar es Salaam to Johannesburg and Lubumbashi.

The heavily loss making four-times weekly Dar es Salaam-Johannesburg services was suspended in Sep-2012 after 13 months of operation, leaving South African Airlines (SAA) as the sole operator on the route. The 737s have subsequently been returned to their owners. Precision had hoped the route would attract tourists to Tanzania’s wildlife parks and Mt Kilimanjaro. Tanzania-based LCC fastjet plans to launch Dar es Salaam to Johannesburg in Sep-2013 using an A319.

But Precision continues to be Tanzania’s biggest domestic carrier with a network of 10 destinations.

Precision chairman Michael Shirima reportedly stated in Aug-2013 that the government had indicated it may support a recapitalisation of Precision, with suggestions that it could agree to act as guarantor to a loan facility or take an equity stake in the carrier. New investment was also being sought from unspecified strategic investors.

Mr Shirima founded Precision in 1991 and the carrier began operations in 1994 and launched its first commercial service in Nov-1999. The carrier was completely privately owned by Mr Shirima until 2003 when Kenya Airways purchased a 49% stake. Mr Shirima’s holding reduced to 43% after the IPO while Kenya Airways’ holding was reduced to 41%.

Kenya Airways has reportedly refused to inject further capital into Precision and recorded a KES230 million (USD2.6 million) loss associated with Precision in its FY2013 accounts.

Under the plan, Precision will focus on consolidating the business by suspending loss making routes, fleet rationalisation, staff retrenchment and generating new revenue from third party maintenance and advertising. Some of this has already occurred with the return of the 737-300 fleet to lessors and the withdrawal from a number of regional routes, including the Johannesburg service.

The plan appears to be a far cry from that envisaged when the review was announced in Jun-2013. At the time Ms Rajab stated: “The next 5 years will be exciting ones for the airline, and the plan will involve massive growth in Precision Air’s operations and will, therefore, require major injection of funds. Various investment options are being reviewed, and once the plan has been finalised and approved by the Board, it will be shared with various stakeholders and the public at large”.

Precision in Oct-2012 reportedly planned to invest USD90 million on fleet expansion over the next three years and commence services to Europe, the Middle East and Asia in five years. Mr Shirima stated at the time that: "Growth is fundamental to succeeding in this business, and so we want to grow our fleet of aircrafts [sic] and expand our route network”.

Once the fleet is in place, Precision will have a fleet of 14 ATRs, making it the largest ATR operator in Africa.

Precision faces increased competition from fastjet which is rapidly closing the total capacity gap in the domestic market. fastjet currently competes directly with Precision on two routes, Dar es Salaam to Kilimanjaro and Dar es Salaam to Mwanza. fastjet also operates on the Zanzibar to Kilimanjaro route while Precision competes indirectly from Zanzibar to nearby city of Arusha.

fastjet has also announced plans to commence three times weekly Dar es Salaam-Mbeya service with A319 equipment from 01-Nov-2013, operating to the new Songwe Airport. Precision is currently the sole operator on the route offering daily ATR-72 services. But fastjet will nearly double the capacity on the route with an additional 468 one-way seats. 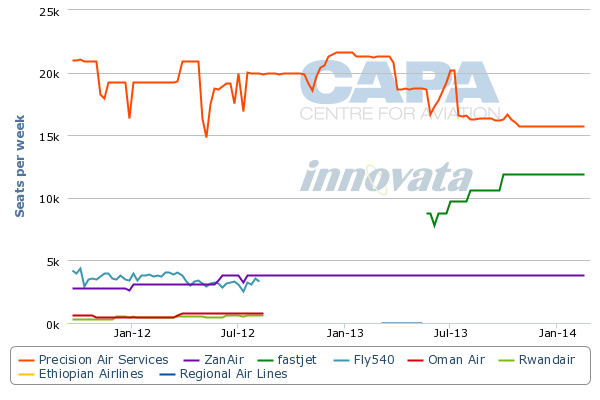 Precision has been reducing capacity on the Dar es Salaam-Kilimanjaro route since Apr-2012 from a peak of 3,672 one-way weekly seats to 1,338 seats per week immediately before the launch of fastjet on the route in May-2013. 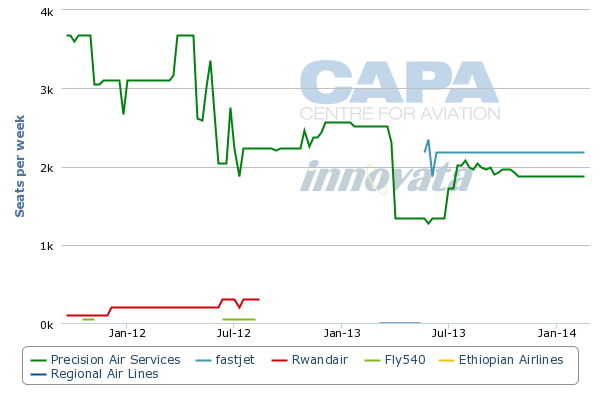 fastjet has also impacted on Precision’s Dar es Salaam-Mwanza service, where the LCC has quickly gained a dominant position since launching in May-2013, offering 2,652 one-way seats per week in Sep-2013. This will increase to 3,276 seats per week in Nov-2013, while Precision has reduced capacity. 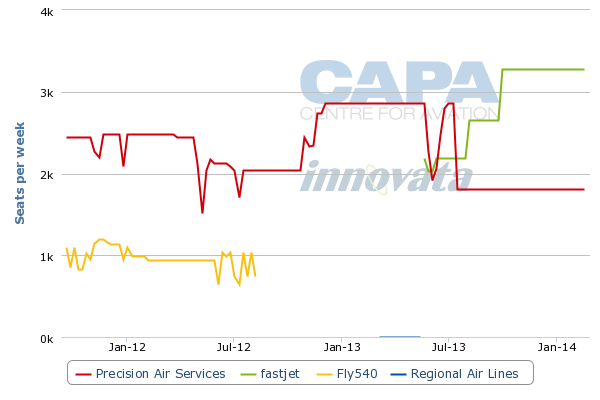 While fastjet is a threat on some of the larger domestic routes, Precision’s ATRs are better suited to serve Tanzania’s remote communities many of which lack paved runways, although an extensive airport infrastructure upgrade programme is underway.

Precision Air has good underlying fundamentals, but will need government assistance to reposition itself

Despite the massive loss, Precision still appears to have reasonable underlying prospects with a modern fuel efficient fleet of ATRs and growing passenger numbers. Unlike many African carriers, Precision has a previously profitable track record.

But it clearly needs to negotiate a funding package with the Tanzanian Government, mainly to cover the shortfall of the IPO capital raising and give the carrier time to reposition itself for growth. The government has indicated that it may be willing to help to ensure that regular air services to more remote parts of the country are maintained.

Precision may also look to expand its codeshare arrangements with Kenya Airways to help drive further traffic growth which will be needed to efficiently operate the additional ATRs due by the end of 2014.

But this is a much lower trajectory than where its earlier projections promised it would be headed.