Pittsburgh Airport: From hub airport to point-to-point in three decades

Pittsburgh is an outstanding example of the boom and bust US hub saga. Serving a metro area that now ranks amongst the top 25 in the US, population-wise, its football team, the Steelers, give a big hint as to its claim to fame—steel. Like many US cities that had their roots in heavy manufacturing, the latter part of the 20th century brought big changes to the city and its inhabitants.

Airline service, once dominated by Allegheny/US Airways, has declined accordingly. Pittsburgh Airport and its business community have responded actively and done much to retrieve lost ground on key routes.

Pittsburgh in 1980: dominated by Allegheny and short-haul

In 1980, deregulation was in its second year and the airline industry was beginning to reshape itself. The aviation market in Pittsburgh, while diverse, was much beholden to Allegheny Airlines, an airline that in late 1979 had rebranded itself as USAir, but was still designated by its previous code AL. The "US" would come later.

Frequent flyer programs were still a year away and the concept of alliances was almost 20 years distant. In other words, air transport was a very different industry from what we now know.

Symbolically, of the seven airline codes displayed above, only two remain in 2010, UA and AA. All the rest have disappeared, the most recent being NW.

There are lots of other differences as well:

However, these features were not atypical of many airports at the time. And the possible transition to a US Airways hub is already a reasonable outcome.

By February 2000, US Airways had a full-fledged hub operating at Pittsburgh. In 1992 a brand new terminal with 76 gates had replaced the former structure and the aviation scene in the city was enormously changed. There were daily cross-border and European flights; at one time Gatwick was served as well.

Source: OAG
*NYC all airports. WAS: US serves IAD/BWI/DCA; UA only serves IAD

As noted, the airport was almost entirely dependent on US Airways, as other carriers did not even compete from all of their hubs. United presented no challenge to either San Francisco or Denver, American did not operate to Miami, despite a growing presence there, and Delta chose to not link Pittsburgh with its Salt Lake City operation.

Interestingly, we will see similar situations develop at other hubs that eventually declined in importance. Widespread networks were established to make the hub a desirable connecting point for a great many travelers, either by adding cities that had no viable point-to-point traffic or by so saturating the market that when the hub carrier recalibrated, the hub city found itself with no service to important destinations: a classic example of too many eggs in one basket.

Today: The dangers of airline concentration

The results of US Airways’ downsizing are readily evident in the average figures shown for Nov-2009. The number of nonstop destinations has fallen from 84 to 38 and the total daily departures, in the neighborhood of 600 at the hub’s peak, has been reduced to 149—down by about 75%.

While US still has the highest number of daily departures, it represents less than a third of the 2000 total. The good news is that space has been created for AirTran, JetBlue and Southwest, that have not only filled some of the void but have also helped to significantly reduce fares at the airport. Nonetheless, the process has been, and continues to be, a painful one for the city and its residents.

Declines still continue in Nov-2009, years after the big-time exit of US. The year-to-date figures (to Nov-2009) show a passenger drop of 8.1% and 12.5% fewer operations. That pattern has been consistent since 2001, the last time the airport showed a passenger increase of +0.6%.

From its peak in 1997 of almost 20.8 million passengers Pittsburgh Airport will likely register less than 8 million in 2009. 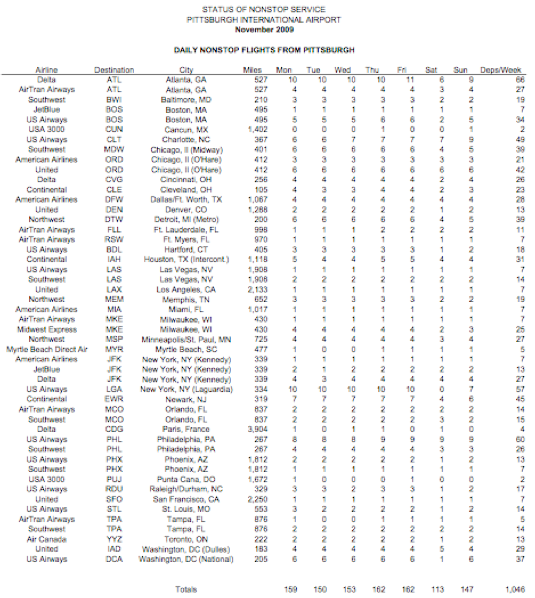 The community strikes back

Ken Zapinski, who heads up the Allegheny Conference’s transportation and infrastructure program, has some interesting observations on the impact of this change on the business community.

While the airport suffered mightily in the US Airways pulldown, most of those passengers were actually in transit and were not crucial to the economic health of the region. But the effect of the carrier’s reductions was to cost the city nonstop service to some important points.

Consequently, the Conference’s mandate was to see that nonstop service was maintained to key business destinations. They polled the business community to ascertain the cities that should be included in that list.

As noted earlier, some of the void had been filled by new generation operators that also brought lower fares. As a result, until 2008, origin and destination traffic in fact increased, even as overall traffic fell precipitously. But then, like most other places, the 2008 oil price rise and subsequent economic morass changed all that as well.

How effective action can actually work

Of primary concern to the business community was the loss of nonstop flights to California and to Europe. The Conference effectively made its case to United, presenting documented research that proved to the carrier that services to both Los Angeles and San Francisco would be profitable. The airline has found that to be true and operates daily Airbuses to both cities.

The resumption of European service was a more complex process. With no dominant carrier able to feed a local network, there was no clear candidate for the operation. However, in 2009 the Allegheny Conference entered a risk-sharing partnership with Delta to operate a nonstop flight to SkyTeam’s Paris hub. The Conference created a fund of $9 million to subsidize any financial shortfall. The agreement expires in June 2011 but the Pittsburgh business community favors its continuance and feels that it has been a positive outcome for all.

According to SkyTeam, the overall transatlantic increase from Pittsburgh actually exceeds the seats provided by the Paris flight, indicating a knock-on effect for the alliance. The flight also has broad community support with 75% of the point-of-sale tickets being issued on the US end. With Delta’s domestic feed in Pittsburgh being virtually nil, almost all of the onward passengers connect on the European end.

The city believes itself to be well-served by the efforts of the Conference. They realised early on that staff reductions at airlines would mean fewer resources for the carriers' route research and analysis. The Conference filled that void for carriers and presented them with data that supported the economic viability of service—in Delta’s case putting local money on the table as well.

Pittsburgh will never return to its previous hub glory-days. There is even doubt that it will ever achieve the status of a “focus city”. But the business community has shown how effective action can successfully maintain a level of service that is vital to the region’s economic welfare and growth. And while the airport is too big for its current role in the national grid, it continues to meet the needs of its constituents: a success by any measure.