Philippine Airlines (PAL) has secured the deals it needs for a relatively quick exit from bankruptcy protection, opening the way for a significant restructuring of its operation. The airline plans to cut back its widebody fleet and long haul network to give itself a better chance of recovery in the post-pandemic market.

PAL filed for Chapter 11 bankruptcy protection in a U.S. court on 3-Sep-2021. The move has been signalled for some time, as the company took several months to negotiate with creditors and investors to present a prearranged bankruptcy for court approval. It is one of a handful of overseas airlines electing to use the U.S. bankruptcy process for reorganisation.

The airline was facing some serious challenges before the pandemic, particularly from strong LCC competitors in its domestic and international markets. It was already planning a turnaround initiative, but like many other airlines in the region it has been forced to take more drastic action.

Its post-bankruptcy headaches will include an uncertain demand recovery timeline and undiminished pressure from LCCs.

With financing and concession deals in place, Chapter 11 should proceed smoothly

An initial hearing on the Chapter 11 filing was held in the bankruptcy court of the Southern District of New York on Sept. 9. PAL’s detailed restructuring plan is expected to be submitted to the court within a few weeks.

The company has gained almost full support from creditors for its plan, so there is unlikely to be much opposition to the restructuring proposal. PAL is aiming to emerge from Chapter 11 by the end of 2021.

PAL’s majority owner has agreed to inject USD505 million in new debt and equity funding to provide liquidity during the airline’s recovery. The airline has arranged another USD150 million in additional debt financing from other private investors “to facilitate post-restructuring activities”, PAL said.

The airline has also secured agreements with the majority of its lessors and other creditors for more than $2 billion in payment reductions. A large proportion of this is related to early returns of leased aircraft and reductions of lease payments.

PAL’s restructuring proposal will cut its fleet capacity by 25% compared to its pre-pandemic size, with 21 aircraft departing from its current fleet of more than 90. There will be reductions across all fleet types, but the widebodies will be most affected.

In the long haul fleet, the airline is expected to return all but two of its six Airbus A350s to lessors, according to Aviation Week. It will also cut four of its 10 Boeing 777-300ERs, two owned and two leased.

PAL considered returning all of the A350s to leave a single long haul type, but eventually decided that two types would give it more versatility. For example, the A350s are regarded as better suited than 777s for flying the airline’s Vancouver route.

Other aircraft due to exit the fleet are seven of PAL’s 15 A330s, four A320-family aircraft, and two Q400 turboprops. Some of the smaller aircraft are operated by PAL's subsidiary PAL Express.

The airline has 13 A321neos remaining on order, previously due for delivery over the next few years. PAL has negotiated deferrals for these, and they are now expected to arrive after 2025.

The next fleet question facing PAL will be a potential replacement for its 777s.

Its six remaining 777s are mostly leased, and their leases are due to expire within the next five years. PAL may decide to order newer widebodies to replace the 777s, although it could also extend the leases and delay the replacement decision.

Longest routes will be dropped, but key North American west coast gateways to be retained

The fleet changes are linked to PAL’s planned network cuts.

PAL will axe its three longest routes to London, New York and Toronto, which were served by the A350s before the pandemic. Routes to destinations on the West Coast of North America – Los Angeles, San Francisco and Vancouver – will remain.

Some cuts will be made to medium haul routes that were operated by A330s, while there will be relatively few reductions to short haul and domestic services. The changes align with the industry’s accepted premise that short haul markets will recover fastest following the pandemic and long haul will be slowest to recover.

The chart below shows what PAL’s top 20 international routes were in Jan-2020, before the pandemic hit.

The core U.S. West Coast routes to Los Angeles and San Francisco were fourth and sixth on the list. Vancouver was 11th. The airline’s longer haul routes to New York and Toronto were 18th and 19th, and London is off the chart at 28th.

The only other route on the top-20 list outside Asia-Pacific was to Riyadh. 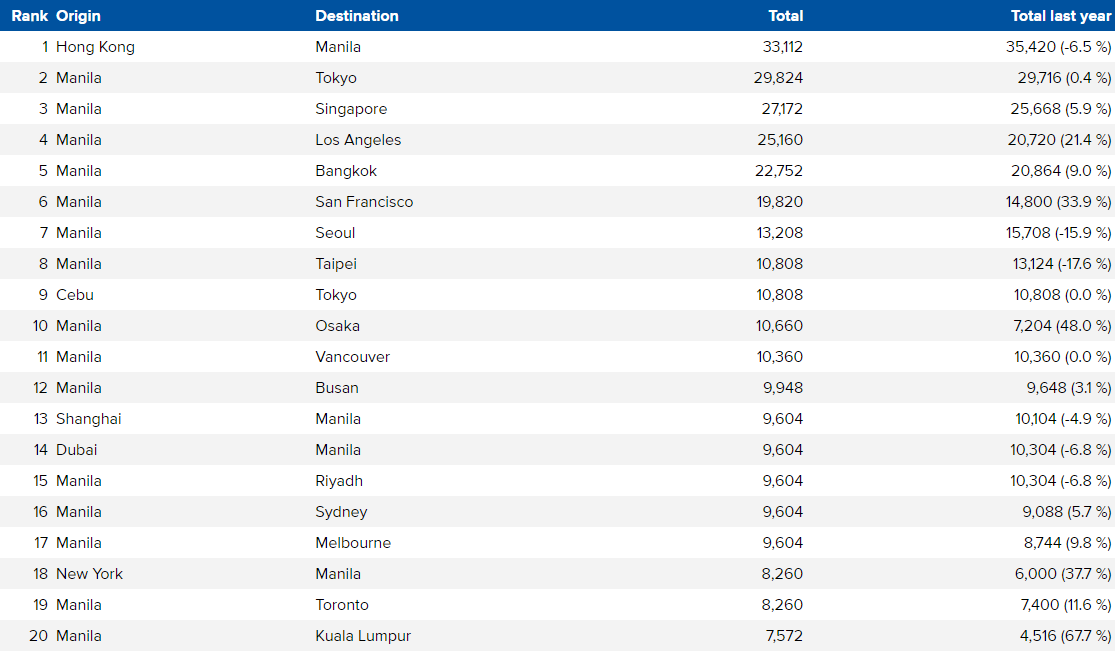 North America has long been a key market for the Philippines.

The graph below shows that in 2019 the U.S. was the country’s third largest source of inbound tourism, behind only South Korea and China (the pink segment collectively represents several smaller markets).

Canada was seventh largest, and the two North American neighbours collectively accounted for nearly 16% of tourists. Even with the loss of Toronto and New York from its network, PAL will still have its major North American gateways on the West Coast. 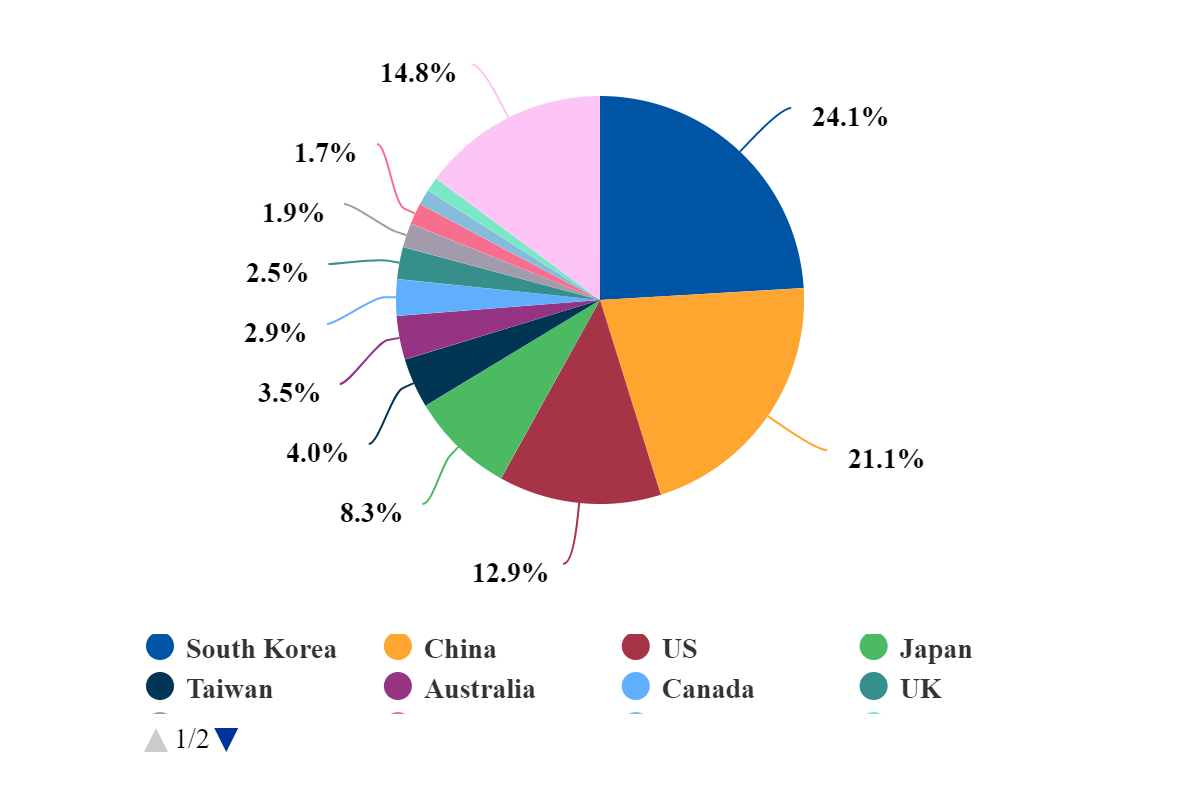 Building up to a revised network plan will still take time

Of course, a large part of PAL’s network remains suspended due to COVID-19 travel restrictions. The airline has said that it is only operating 21% of its pre-pandemic flights, although it is gradually rebuilding the network.

The chart below illustrates the very slow progress PAL has made so far. 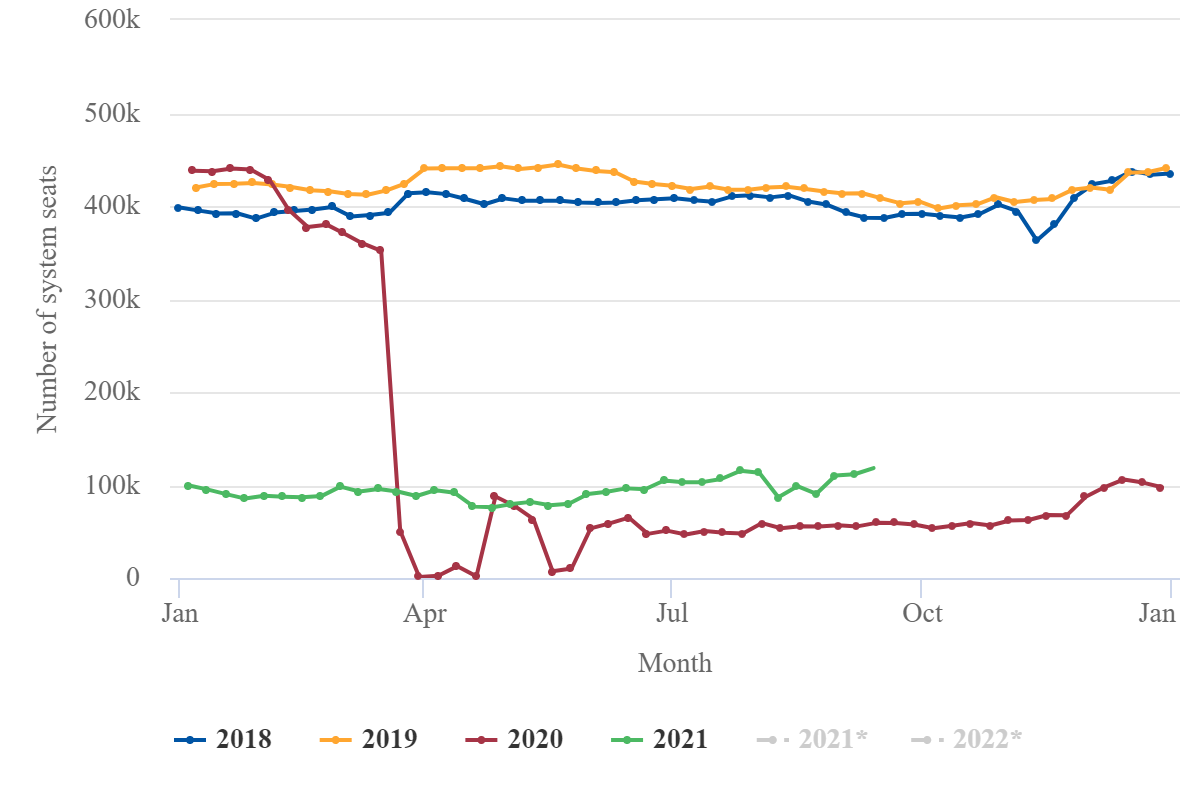 The service reductions have wiped out more than USD2 billion in revenue since the start of the pandemic.

Because of the sharp revenue loss, PAL has already downsized its workforce. The airline announced in Feb-2021 that it had to cut 2,300 employees, and this was completed in Mar-2021.

Despite streamlining, some of PAL’s pre-COVID headaches will remain

The airline was facing challenges before the pandemic arrived. It was contending with strong competition from low cost carriers on short haul routes – particularly from its Philippine-based rival Cebu Pacific. Cebu had a dominant share of domestic capacity in Jan-2020, as the chart below shows.

Philippines: domestic market share, as measured in seats for the week of 20-Jan-2020

PAL was the leading player in the pre-pandemic international market, with 25.1%. However, here also it was under pressure from LCCs, and from other full service airlines on long haul routes.

Philippines: international market share, as measured in seats for the week of 20-Jan-2020

PAL had launched a turnaround effort in 2019 to improve its financial performance. A new president and senior management team were appointed, but it had only just begun to put changes in place when the COVID-19 crisis arrived.

Now the airline is looking at a more extensive restructuring.

Cutting down its long haul fleet and at least temporarily shrinking its network will undoubtedly be a tough pill to swallow for PAL.

The A350s were the airline’s new flagship fleet, and they were less than three years old. But the pandemic is forcing many airlines to make difficult choices of this nature.

Pulling back from its longest routes and focusing on its core trans Pacific markets also makes sense in this context. More about the airline’s plan will be revealed as the Chapter 11 process progresses.

But there is no question that a streamlined PAL will be better placed to respond to what could be a protracted recovery in international markets. It will also have options to expand its widebody fleet again and perhaps resume some of its cancelled routes when demand does eventually come back.

Gaining agreement from its creditors and presumably a smooth passage through bankruptcy court will be major steps for PAL. But it is far from out of the woods yet, and it still has some tough months ahead of it before any meaningful recovery takes hold.