In 2Q2015, Pegasus Airlines' operating result fell into loss in what is usually a profitable quarter for the Turkish LCC. Foreign currency movements served to inflate both revenue and costs, with a net negative impact on profitability.

However, the negative result was largely driven by the weakness of unit revenue (RASK), which was dragged down both by poor yields and falling load factors. It seems that the competitive landscape at Sabiha Gokcen, Pegasus' main base, remains highly competitive thanks to Turkish Airlines' expansion and the LCCs own strong capacity growth.

If it is to meet its FY2015 profitability target, Pegasus will have to perform more strongly in 2H2015, in particular in 3Q (which typically accounts for the vast bulk of annual profit).

In 2Q2015, Pegasus Airlines reported a net profit of TRY38 million, down by 55.5% from the TRY87 million result a year earlier. This year's result was boosted by foreign exchange gains on financial instruments and derivative contracts and by a positive deferred tax item, partly offset by foreign exchange losses on operating items.

The operating result (before other operating income and expense), which gives a truer indication of the underlying performance of the business, fell from a profit of TRY81 million in 2Q2014 to a loss of TRY10 million in 2Q2015. Revenue increased by 5.0% to TRY834 million and the operating margin fell by 11.4ppts to -1.2%.

The drop in operating profit in 2Q more than offset the improvement in 1Q, bringing the half year result to a heavier loss than last year. For 1H2015, revenue grew by 8.6% to TRY1,417 million and the operating loss widened more than threefold from a loss of TRY32 million to a loss of TRY102 million. 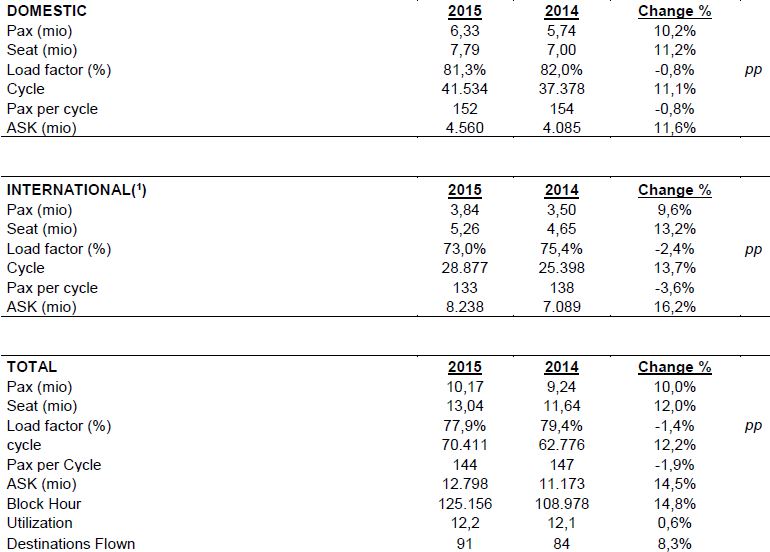 Total revenue per ASK (RASK) fell by 6.6% year on year in 2Q, according to our calculations, mainly reflecting weak passenger yield, exacerbated by falling load factor. Nevertheless, RASK was boosted slightly by the weakening of TRY versus EUR. In EUR terms, RASK fell by 8.2%.

Pegasus' total operating costs increased by 18.2%, faster than the growth in ASKs and revenue in 2Q2015. Fuel costs were almost at the same level as in the prior year period, in spite of the capacity increase, thanks to lower jet fuel prices, partly offset by a stronger USD versus TRY exchange rate (fuel cost per ASK fell by 10.4% in TRY terms).

Fuel accounted for 35% of total costs in 2Q2015, down from 41% a year earlier. According to CAPA calculations, Pegasus' 2Q fuel bill would have been TRY34 million higher (and its operating profit lower by the same amount) if it had paid the same fuel cost per ASK in 2Q2015 as it did in 2Q2014.

Both revenue and cost, as reported in TRY, were inflated by currency movements, but the impact on costs was greater than it was on revenues.

This was mainly due to the significant imbalance in Pegasus' USD exposure in its income statement. In 1H2015, it had 55% of costs in USD, but only 17% of revenues. Its EUR exposure is greater on the revenue side (37%) than on the cost side (23%). The negative cost impact on profit of TRY weakening versus USD was more significant than the positive revenue impact of TRY weakening versus EUR. According to Pegasus, a one cent movement in EUR/TRY and USD/TRY impacts 1H2015 EBIT by +TRY0.2 million and -TRY1.0 million respectively. 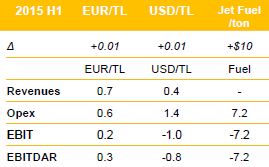 Pegasus has made some changes to its guidance and targets for FY2015 compared with those stated at the time of its 1Q2015 results announcement. It still plans ASK growth of 17%-19%, implying faster growth in 2H than the 14.5% increase in 1H.

Although this ASK growth plan is unchanged, Pegasus now expects passenger numbers to be up by 13%-15%, instead of 15%-17% previously. This follows a downgrade by aviation authority DHMI in the forecast growth in total passenger numbers in the Turkish market from 12% to 7% in 2015.

In the domestic market, the airline expects to report flat load factor and a slight yield decline, implying a better trends in 2H versus 1H in both load factor and yield. International load factor is expected to be down slightly (it fell by 2.4pts in 1H, so this fall will have to be narrower in 2H) and international yield (in EUR) are predicted to be flat in 2015 (after growing by 4% in 1H, but falling by 4% in 2Q).

Overall, this guidance on load factor and yield implies a modest underlying RASK decline in FY2015, although foreign exchange movements could lead to a more positive RASK trend in TRY terms. FY2015 CASK (in EUR) is expected to be up 2%-3%, compared with a 2% increase in 1H.

In Pegasus' functional currency, EUR, its CASK has shown year on year growth in each of the past four quarters, going back to 3Q2014. Although RASK also grew in each quarter from 3Q2014 to 1Q2015, it fell in 2Q21015 while CASK continued to increase.

With CASK expected to grow in 2H at a similar rate to 1H, the key to FY2015 profitability will likely be the performance of Pegasus' RASK. Its weakness in 2Q2015 suggests that the competitive environment remains fierce.