Pegasus Airlines is playing a waiting game. The Turkish LCC's 2015 operating profit and margin contracted for the second year running, bucking the trend of the majority of European listed airlines. For most, lower fuel prices more than offset downward pressure on unit revenue, and margins expanded in 2015.

At Pegasus, changes to its cost structure prevented it from lowering its unit cost to offset falling yield and load factor in 2015, in spite of lower fuel. Although there are market-related pressures on pricing, including geopolitical concerns, Pegasus also acknowledges that its own capacity growth contributed to falling yield.

Nevertheless, Pegasus will accelerate its capacity growth in 2016. Its argument is that the low fuel price environment is stimulating competitor growth, and that it is important for Pegasus to retain its position. Then it will be able to benefit from any shake-out in the market if and when fuel prices rise, to the detriment of weaker players that are currently propped up by low fuel. Such longer-term thinking is commendable, but Pegasus must nevertheless refocus on non-fuel costs.

Pegasus' EBITDAR margin, one of the key measures on which it provides guidance to the financial markets, was flat at 19.5%. This was in line with, but at the lower end of, its guidance range of 19% to 21%.

An increase in debt was more than offset by increased cash, so that net debt fell by 7% during the year to TRY460 million by the end of 2015. Its cash balance of 955 million, up 11% year-on-year, was the equivalent of 100 days of revenue (only slightly lower, from 101 days at the end of 2014). This is a reasonable liquidity cushion.

Two years of falling operating profit have resulted in this indicator falling by TRY101 million, or 37%, since 2013's result of TRY278 million (excluding results from airberlin Turkey, which was operated by Pegasus until 2013). This has happened in spite of a revenue increase of TRY1.1 billion, or 46%, from 2013 to 2015. 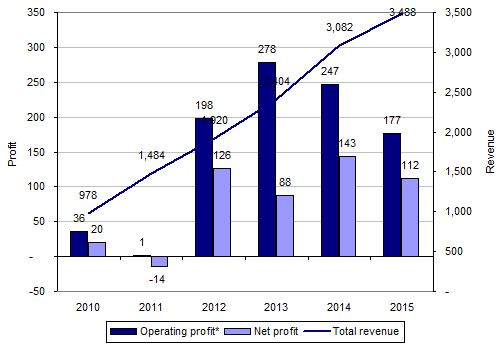 *Operating profit before 'Other operating income' and 'Other operating expenses'; excludes results from airberlin Turkey, operated by Pegasus until 2013
Source: CAPA - Centre for Aviation, Pegasus Airlines

The airline's passenger load factor fell by 0.9ppts to 79.0%, its second successive year of decline. This brings its load factor not only well below those of Europe's leading LCCs (both Ryanair and easyJet were around 92% in calendar 2015), but also below the global airline average of 80.3% in 2015 (according to IATA).

ASKs increased by 14.7% in 2015, which was slower than the compound average growth rate of 18% pa from 2010 to 2015. Growth in passenger numbers in 2015 was also slower than its five-year average of 21% pa. Nevertheless, Pegasus has maintained consistently strong growth rates over several years, and this inevitably puts pressure on load factor. 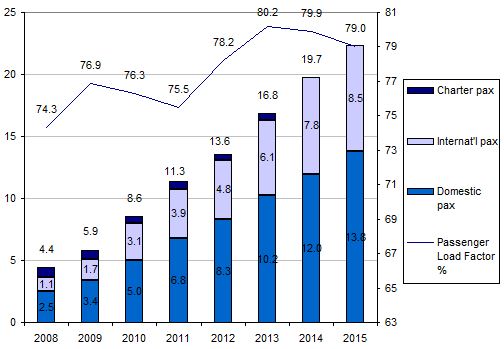 Revenue was up 13.2% overall; domestic flight revenue falls behind capacity

International revenue was boosted by the weakness of TRY versus EUR and USD. This had the effect of increasing the component of revenue generated in these currencies, when translated back into Pegasus' reporting currency, TRY. Pegasus tracks its international yield in EUR and this measure fell by 2% (international load factor was also lower, by 1.8ppts).

Ancillary revenue grew by 24.6%, faster than ASK and passenger growth. Ancillary revenue per passenger, expressed in EUR, is another of Pegasus' key targets. This reached EUR9.77 in 2015, up 5%, compared with its EUR10 target.

Total revenue per ASK, expressed in TRY, fell by 1.3%, according to CAPA calculations.

Costs increased by 16.8% in 2015, faster than the growth in ASKs and revenue. Total cost per ASK, as reported in TRY, increased by 1.8%, according to CAPA calculations.

Fuel costs fell by 4.5%, in spite of the increased capacity, thanks to lower fuel prices. The fall in the fuel bill was partly offset by the depreciation of TRY against USD and by Pegasus' fuel hedging programme. In 2015, 46% of its fuel needs were hedged at an average jet fuel price of USD893 per tonne. For 2016, it currently has 60% of its fuel needs hedged at USD556 per tonne, so further savings can be expected.

Non-fuel costs jumped by 31.9%, significantly faster than revenue and capacity growth. However, 23% of total costs were in EUR and 55% of costs were in USD and so the weakness of TRY against both of these currencies served to increase costs reported in Pegasus' local currency.

Expressed in EUR, total CASK fell by 3.0%, which was a better outcome than Pegasus' guidance of a 2%-3% increase.

CAPA calculates that ex fuel cost per ASK increased by 14.9% in TRY terms. In EUR, which Pegasus regards as its functional currency, ex fuel cost per ASK increased at a lower rate, but was still up 9.5%. More than half of this increase was due to the strengthening of USD versus EUR, leaving an underlying 3% increase in ex fuel CASK at constant currency.

Relative trend of RASK vs CASK is deteriorating

Although trends in RASK and CASK can be blurred and confused by currency effects, the difference in the growth rate of each of these two indicators is what drives the change in operating margin from year to year. In 2015, RASK fell by 1.3%, while CASK grew by 1.8%.

Without the benefit of lower fuel prices, CASK growth would have been even higher. However, it can also be argued that RASK would also have been stronger if fuel prices had been higher, since higher fuel prices would have placed more pressure on the profitability of some competitors' capacity.

Nevertheless, ex fuel CASK has been on a rising trend since 2012. Until 2014, total CASK was also increasing at a broadly similar rate and so was RASK (although the gap between RASK and CASK started to narrow in 2014). In 2015, ex fuel CASK continued along its upward trajectory, while total CASK growth slowed as a result of lower fuel prices.

However, the RASK trend switched from rising to declining in 2015 and this caused a contraction of the operating margin. 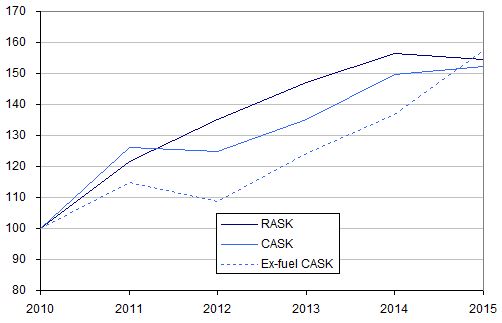 Capacity growth to accelerate in 2016

Downward pressure on RASK can be exacerbated by rapid capacity growth. In 2016, Pegasus plans to accelerate its growth, with an ASK increase of 18% to 20% and a passenger growth of 13% to 15%, and the airline expects load factor to remain at its 2015 level.

Pegasus expects domestic yield to be flat in TRY terms, but international yield (and load factor) is expected to be lower in EUR as a result of several factors: its capacity increase, competition and geopolitics. Its target for ancillary revenue per passenger is EUR10-EUR11. Pegasus anticipates a decrease in total CASK of 2% to 3%, mostly due to lower fuel prices, which suggests that ex fuel CASK may continue to rise.

The result of these elements of guidance is a target EBITDAR range of 19% to 21% (the same guidance as for 2015, when the outcome was 19.5%). Pegasus is finding it challenging to increase margins, in spite of lower fuel prices, because of pricing pressure in its markets and some stubbornness in non-fuel costs.

The logic here is that pricing will improve and competition will reduce if and when fuel prices go up again, when Pegasus will be well placed to benefit. Calling lower fuel prices a "lifeline" for some competitor airlines, Mr Ulga said that market growth was currently more rapid than it might be otherwise.

Nevertheless, Pegasus can not lose sight of cost control. It is still one of only three ultra-low cost airlines in Europe (the other two are Wizz Air and Ryanair), but maintaining this distinction is vital and needs focus.

When the airline completed its stock market flotation in Apr-2013 it was enjoying a rising operating profit and margin trend, thanks to RASK growth and control over CASK (in particular, over ex fuel CASK).

However, as noted above, the relative trends of RASK and CASK have not continued to be so favourable, and 2013 then turned out to be a peak in both the absolute operating profit and the operating margin. 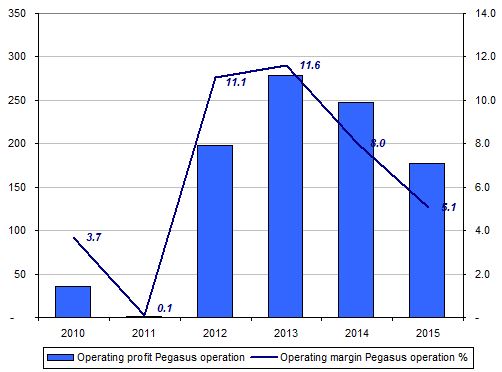 In an analysis report on Pegasus' FY2013 results in Mar-2014, CAPA noted what had been a trend of RASK rising faster than CASK, but also sounded a note of caution:

Nevertheless, Pegasus should not rely on the recent trend of RASK growth outpacing CASK growth to improve profits. Rather, it would be better served by seeking to reduce its already very low CASK to protect itself from any interruption in its ability to grow RASK.

The same is still true today.