Pegasus Airlines is having a difficult year. Its 2Q2016 results revealed a year on year widening of its operating loss for the third successive quarter. A series of geopolitical and terrorist events in Turkey have weighed on demand for international travel in particular.

Although Pegasus slowed its capacity growth in 2Q, this did not arrest the trend of plunging unit revenue. In spite of low fuel prices, Pegasus has not been able to match the fall in RASK with a sufficient reduction in its unit cost.

In response to its weak 2Q and 1H results, Pegasus has issued a profit warning, lowering its guidance for FY2016 and implying an operating loss for the year. After a number of years of double digit passenger growth, it now targets an increase of only 5%-7% this year (it previously expected 13%-15%). A more cautious approach to growth makes sense in the current environment.

This margin was lower even than airberlin's 1H2016 operating margin of -14.4%, making Pegasus the least profitable listed European airline group to report for the period so far. 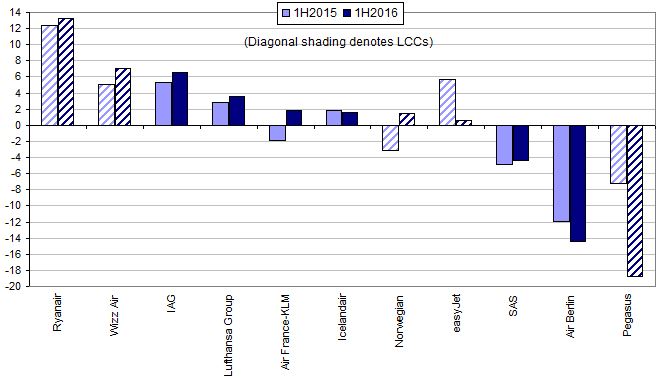 Note: 1H based on calendar years except SAS (six months to Mar15 and Mar-16)
Operating margin based on operating profit before exceptional items and before equity investments
Source: CAPA - Centre for Aviation, airline company reports

In 2Q2016, Pegasus increased its seat numbers by 5.4%, driven mainly by an 8.2% increase in scheduled seats in the domestic market, but slowed by international seat growth of 3.5%. Charter seats were cut by 47.6%.

Total ASK growth was 4.7%, a little slower than seat growth as a result of shorter average trip lengths (reflecting stronger growth on domestic routes). This was a deceleration of Pegasus' capacity growth following its 22.8% increase in 1Q2016, reflecting both capacity constraints at Istanbul Sabiha Gokcen Airport and falling demand for international travel to Turkey.

In spite of slowing capacity growth, load factor dipped by 1.0ppts to 77.0%, dragged down by a 3.8ppt slump on international flights to 69.3%. Domestic load factor managed a modest increase, by 0.7ppts to 81.9%.

Although its growth slowed considerably, Pegasus' passenger growth of 4.0% outpaced the overall Turkish market, which suffered a 7% drop in numbers in 2Q2016. Pegasus' domestic passenger numbers grew by 9.2%, compared with 5% in domestic Turkey overall.

Its international passenger numbers fell by 1.9%, compared with a 19% drop in all markets to/from Turkey. The collapse in demand on international routes reflected a series of geopolitical/terrorist events throughout 1H2016.

Such concerns have not abated following the end of the half year. The attempted coup in Turkey that took place in Jul-2016 further slowed Pegasus' traffic growth for the first month of 3Q2016, with passenger numbers increasing by only 1.3% (international down by 3.6% and domestic up by 4.7%).

Nevertheless, this was still a relatively strong performance, especially given the partial closure of Turkish airspace following the coup attempt and the 3.6% drop in passenger numbers at Sabiha Gokcen Airport overall in Jul-2016.

Pegasus' outperformance against the market highlights the attraction of its low fares, enabled by its ultra-LCC cost base.

Pegasus' revenue fell by 4.3% in 2Q2016, in spite of the capacity increase. This was possibly the first year on year revenue decline in any quarter since its inception and certainly the first since its IPO.

Ancillary revenue continues to be a bright spot for Pegasus, with an 18.3% increase in 2Q2016, when it accounted for 24% of total revenue (up from 20% a year earlier). Ancillary revenue per passenger grew by 13.9% to TRY33.22, although much of this growth reflected currency movements.

Costs increased by 7.9% in 2Q2016, faster than the increase in capacity and contrasting sharply with the fall in revenue. Fuel costs fell by 21.9%, taking their share of total costs down to 25% from 35% a year earlier. However, ex fuel costs grew by 24.0%, including a 46.6% increase in labour costs.

Ex fuel costs were adversely affected by currency movements and also by underlying factors including airport disruption costs and an increased proportion of operating leased aircraft (44 out of 72 aircraft at end Jun-2016, versus 37 out of 65 a year earlier).

A pattern of RASK growth being weaker than CASK growth

Both RASK and CASK were boosted by currency movements as TRY weakened against EUR. Expressed in Pegasus' functional currency, EUR, its RASK fell by 17.7%, a very heavy fall reflecting weak international demand. Its EUR-denominated CASK was down by 7.2%, while ex fuel CASK grew by 6.6% in EUR terms.

As ever, the difference between RASK growth and CASK growth (regardless of currency) is what drives operating margin. In EUR, Pegasus' RASK has fallen more rapidly than its CASK in each of the past three quarters, in spite of falling fuel prices. RASK growth has been weaker than CASK growth in nine of the past 13 quarters.

Pegasus now expects international yield to be down by EUR9-10, whereas previously it only expected a "downside trend". Its domestic yield is now expected to fall by TRY2-3, rather than to remain flat. 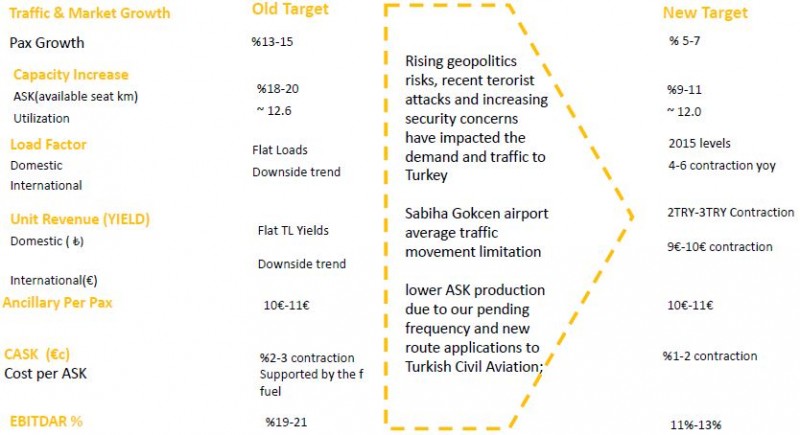 Pegasus' profitability has become increasingly seasonal in recent years. In 2013, it made a small operating profit in 1H, thanks to its 2Q result. Since then, growing 1Q losses and 2Q's fall into loss have meant that 1H has now been loss-making for three successive years.

In 2015, Pegasus achieved a 2H operating loss of TRY279 million, almost the same figure as its 1H operating profit this year. Given the deteriorating year on year trend of quarterly operating results, it is highly unlikely to repeat its second half performance this year. The third quarter will not be able to offset losses in the other quarters and Pegasus now looks set for an operating loss in FY2016.

Looking further ahead, and taking a slightly more positive line, Pegasus continues to have one of the lowest levels of unit cost (CASK) in Europe. In Jul-2016, it took delivery of the first of an order of up to 100 A320neo family aircraft and this should provide further cost efficiencies.

This year, a combination of geopolitical concerns and low fuel prices have contributed to a very heavy decline in RASK, which has made profitability elusive, even for an airline with Pegasus' low CASK.

A period of slower growth seems prudent (indeed, previous CAPA analysis has suggested this), but Pegasus' low cost base should allow it to weather the storm and to return to profit when pricing pressures ease.