In 1Q2016 Pegasus suffered another fall in its operating margin, after being one of only a very small number of listed European airlines to experience margin contraction in FY2015.

The main cause of this slide in profitability for Pegasus is unit revenue weakness, which is partly due to external macroeconomic and geopolitical factors, and partly due to its own rapid capacity growth. Low fuel prices have not been a sufficient influence for Pegasus to lower its unit cost enough to offset falling unit revenue. Low fuel prices have actually even contributed to low unit revenue – by encouraging competitor capacity growth.

Pegasus' unit cost is around one third below that of its biggest competitor Turkish Airlines and one of the lowest in Europe. This gives its business model some robustness against weak pricing, but this environment also places greater pressure on its cost base.

In 1Q2016 Pegasus more than doubled its net loss to TRY191 million (EUR59 million) from TRY81 million a year earlier. The 1Q2016 result was affected by a number of non-operating items, including foreign exchange movements, changes in net foreign exchange gains and losses related to financing activities, and by different tax charges.

Pegasus' operating result excludes these items and gives a better idea of the underlying performance of the business. The operating loss widened by 80% from TRY93 million in 1Q2015 to a loss of TRY167 million (EUR51 million) in 1Q2016.

Pegasus' operating margin was the lowest among listed European airline companies to have reported calendar 1Q2016 results so far. As in previous years, the seasonality of Pegasus' business means that its 1Q result is not a good indicator of its FY result, but the deterioration in its 1Q margin bucks the trend of most of the larger European airlines that have reported for the period.

The only airlines that report quarterly and have still to announce results for the quarter are fellow ultra-LCCs Ryanair and Wizz Air, which were the two most profitable European airlines by operating margin in 2015, and Aegean Airlines. Although calendar 1Q is seasonally weak, none of these is likely to announce a lower margin than Pegasus for this quarter.

EasyJet, Europe's second largest LCC behind Ryanair, did suffer a fall in profitability in the quarter but at a margin of approximately -5% – much higher than that of Pegasus.

Pegasus has been unable to grow its FY load factor since it peaked at 80.2% in 2013 and, although 1Q is a seasonally weak quarter, this trend is troubling. Leading European LCCs such as Ryanair and easyJet are achieving load factors close to 90% in every quarter of the year. 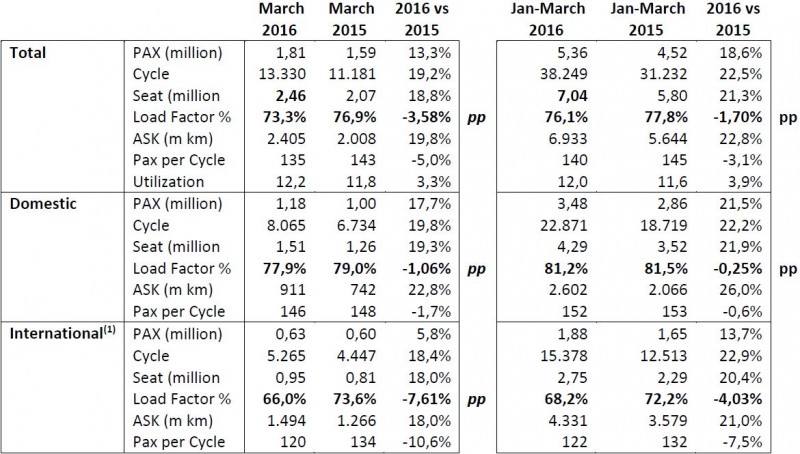 In spite of Pegasus' faster growth in the domestic market load factor in this part of the network held up better, staying almost flat at 81.2% (a reduction of 0.3ppts). Its international load factor shed 4.0ppts to 68.2%, a very mediocre level for a low cost airline. Uncertainty over geopolitical events is clearly weakening demand in international markets.

According to CAPA calculations, total CASK increased by 3.3% and non-fuel CASK grew by 19.0%.

Adjusted for currency, both RASK and CASK fell heavily (but RASK fell faster)

However, as is typically the case for Pegasus (and as with RASK), this CASK performance was sharply affected by movements in foreign exchange rates. Although TRY is its reporting currency, only 26% of Pegasus' 1Q2016 operating costs were TRY-denominated. Moreover, Pegasus uses EUR as its functional currency.

Currency movements also had an impact on total RASK. In EUR terms, RASK fell by 17.6%, rather than the 3.5% fall based on TRY numbers. This heavy EUR-denominated RASK fall reflects the softness of demand in Pegasus' markets, particularly on international routes.

Although Turkish Airlines has a much wider global network, Pegasus' EUR-denominated RASK decline was consistent with its FSC rival's USD-denominated RASK fall of 17.2%. Geopolitical events have soften demand in many markets, but Turkey has felt this impact more than some.

Pegasus' EUR RASK has fallen in each of the past four quarters and increased in only two of the past 11 quarters.

RASK has underperformed against CASK too often

Since the beginning of 2013 RASK growth has underperformed against CASK growth in eight out of 13 quarters, including three out of the past four.

Pegasus has not changed its 2016 guidance. This includes an ASK increase of 18% to 20% and passenger growth of 13% to 15%, with load factor flat at its 2015 level. It expects domestic yield to be flat in TRY terms, but international yield (and load factor) to fall in EUR terms.

Pegasus anticipates a decrease in total CASK of 2% to 3%, mostly due to lower fuel prices, which suggests that ex fuel CASK may continue to rise. There is no change to its target EBITDAR margin range of 19% to 21%, which compares reasonably with its 2015 outcome of 19.5%.

However, in 1Q2016 its depreciation and operating lease expenses increased sharply and, if this continues through the year, it can be expected that the airline's operating margin will be lower, even if EBITDAR margin is flat or higher than in 2015.

Weak unit revenue is partly due to market factors, but exacerbated by Pegasus' market share battle with Turkish

Pegasus suffered a fall in its operating margin in 2015, when almost every other listed European airline increased their margins. This was, at least partly, due to downward RASK pressure, which was partly the result of very rapid capacity growth.

In a low fuel price environment its leading local competitor, Turkish Airlines, is accelerating its growth, and Pegasus is anxious to maintain its market share. Both are experiencing heavy declines in unit revenue, partly due to external market factors affecting demand, but partly also due to their own growth ambitions.

Pegasus already has one of the lowest unit costs in Europe, but in this environment it must continue to work hard at lowering ex fuel unit costs even further.