Boeing order book for the year is slowly climbing back into positive territory, after winning an order for two B737s from aircraft leasing company MC Aviation Partners, worth USD153 million at list prices - its first at the Paris Air Show. Last week, the US manufacturer booked eight orders for B737s (and one B787 cancellation), putting its orders/cancellations balance back above zero for the year.

65 of the 66 Boeing order cancellations for the year to date have been for widebodies (including 58 B787 cancellations), while 52 of the 75 orders have been for the narrowbody B737. Boeing is not unduly concerned, as its order backlog of approximately 3,700 aircraft represents almost eight years of production at present rates. However, the ordering of cheaper B737s and the cancellations of widebody aircraft will be affecting the value of the company's order book.

The manufacturer is concentrating efforts on retaining its existing orders. Boeing Commercial Airplanes VP Marketing, Randy Tinseth, stated yesterday that the manufacturer does not expect aircraft cancellations or delivery delays, due to a lack or finance and reiterated Boeing's delivery forecast of 480-485 aircraft for the year.

Boeing's share price was down 0.6% yesterday, after a mixed day on Wall Street.

Boeing's major competitor, EADS, was up 0.7% (running against European markets) after its Airbus commercial aircraft unit reported stronger ordering at the Paris Air Show. The manufacturer has confirmed 57 firm orders in the first three days of the Paris Air Show, which could rise to 77, as China Eastern Airlines announced to the Hong Kong Stock exchange that it plans to acquire 20 A320s.

US online travel agency Expedia fell 3.7% yesterday, after the Georgia Supreme Court ruled against it in a sales tax collection case with the City of Columbus, Georgia. The size of the pay-out will be determined in court trial at a later date. Expedia has already suffered sharply after a May-2009 ruling by a Washington court ordering it to pay USD184 million in a class-action case brought against it for breach of contract. Expedia is also facing a court case against its Hotels.com website, brought by 175 Texas municipalities in a San Antonio federal court. 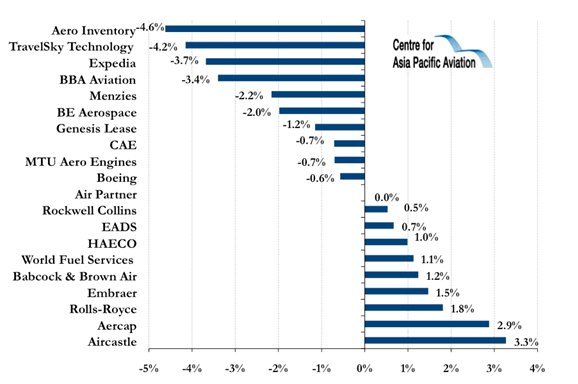