The business end of the Paris Air Show drew to a close yesterday, with more orders for Airbus and another quiet day for Embraer and Boeing. Aviation suppliers’ shares were generally stronger, despite modest gains in European and US stock markets and falls in Asia.

EADS’ commercial aircraft unit, Airbus, signed an MoU with Eastern European LCC, Wizz Air, for another 50 A320 narrowbodies yesterday. However, more mixed news regarding the A400M has kept any share gains modest (up 1.4% yesterday). EADS stated that it could see a situation where the US military could need the aircraft. At the same time, the company has requested a delay to new contract negotiations for the aircraft and has also postponed the start of ground engine testing. The programme is costing approximately EUR100 million per month to maintain, according to Airbus Military.

Boeing was up 0.8%, despite pocketing a single order for two B737s at the Paris Air Show. The manufacturer, with a 3,700 aircraft order backlog, is still optimistic regarding a recovery in mid-2010.

Embraer's shares rose 0.5% yesterday, after several weeks of generally downward trading. The Brazilian manufacturer confirmed at the Paris Air Show that it has dropped its revenue outlook for the year from USD6.3 billion to USD5.5 billion and its aircraft delivery target from 320 to just 242 for the year.

BBA Aviation took a big hit yesterday, down 6.6%. The stock has increased more than 100% since the end of March, although it has been trading between 110 and 130 pence since the beginning of May. Bill Gates' Cascade Investment Group acquired a 3.2% stake in the company at the beginning of the week. 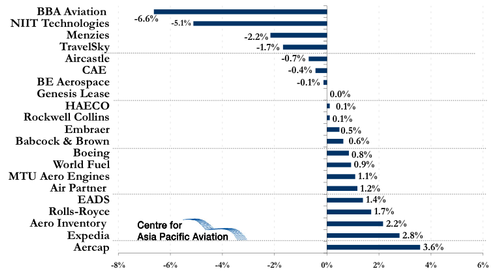