There were very few surprises on the second day of the Paris Air Show, with aviation suppliers' share prices generally weaker as markets in the US, Europe and Asia all slipped significantly. EADS shares' were down 2.9%, with Boeing falling 3.7% and Embraer down 4.8% while large aircraft lessors tumbled.

Qatar Airways also bolstered hopes for more orders for Bombardier's new CSeries aircraft, stating it is willing to resume negotiations if the manufacturer provides an improved offer. Bombardier released its annual market forecast this week, with the manufacturer adjusting its outlook to reflect the shift away from smaller regional jets towards larger single-aisle aircraft. Sukhoi also let it known that it is considering a 100+ seat stretched version of its SSJ-100 regional jet.

Meanwhile, ATR reduced its 2009 delivery target from 60 to 50 aircraft, but has confirmed it is sticking to its USD1.4 billion revenue forecast, having received 28 orders for the year, including two new orders at Paris.

Boeing has yet to report any new orders at the show, with major manufacturers concentrating on minimising order cancellations rather than focusing on new orders. Boeing is taking a strong long-term view, forecasting an upturn in demand in 2010, remaining confident about maintaining commercial aircraft production at current levels. President and CEO of Boeing Commercial Aircraft, Scott Carson, stated markets are currently "bouncing off the bottom of the cycle".

Airbus parent, EADS, has also expressed similar confidence in the long-term recovery prospects. EADS CEO, Louis Gallois, declared that Airbus is ready to raise production levels as soon as the economic environment improves, although he is not as bullish on the recovery prospects in 2010. EADS has also held talks with buyer countries for its delayed A400M, describing them as "intensive and constructive".

Embraer's share price had the largest fall among the large manufacturers yesterday (-4.8%), although the company saw some ordering at Paris, with new contracts for Fuji Dream Airlines (a single E-175) and KLM Cityhopper (seven E190s).

Engine manufacturers share prices were down also, with Rolls-Royce dropping 2.0% and MTU losing 1.7%. However, engine manufacturers appear to have been the big winners so far at the Paris Air Show, with IAE (a consortium including Rolls-Royce, MTU and Pratt & Whitney) reporting several new orders totaling more than USD1.4 billion. Rolls-Royce also signed a new USD1.5 billion agreement with Gulf Air for engines for 20 long-haul aircraft. Korean Air also ordered USD300 million worth in engines from Pratt & Whitney. CFM International announced a target of 600 engine orders for the year, having already received 303 orders in the first five months of the year.

Some of the only positive movements yesterday were from aircraft lessors, with Menzies up 2.2% and Air Partner climbing 1.0%. However, these two traded against the trend in the leasing industry, with Aercap dropping 7.0%, Aircastle down 5.9% and Babcock & Brown Air falling 4.8%. 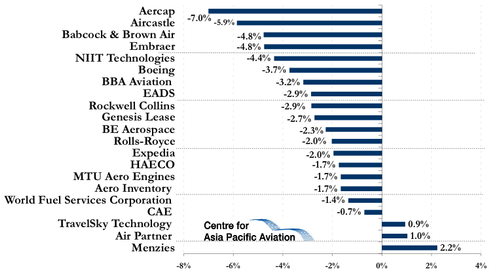