EADS unit Airbus recorded a healthy number of new orders on the second day of the Paris Air Show, although it was the engine manufacturers that are reporting swift trade. Boeing's order book has yet to tick over in Paris. EADS was up 0.7% yesterday, trading against generally weaker European stocks, while Boeing was down 1.4%, slightly worse than the overall fall in US markets.

Another Middle East carrier, Etihad Airways, stole the headlines yesterday with a USD7 billion order for 239 engines, spread between all the major engine manufacturers. If Etihad exercises all purchase options, the value of the engine order could double. Trading at MTU Aero Engines was flat yesterday, but Rolls-Royce gained 1.4%.

Rolls-Royce President, Mark King, stated that the company's strong order book, totaling approximately USD45 billion, puts it in a "pretty resilient" position, and its order book has continued to expand over the past six months, with no cancellations of "any great magnitude". After its share price jumped sharply at the end of April and hit a peak in mid-May, Rolls Royce has been trading between 320 and 340 pence for the last few weeks. 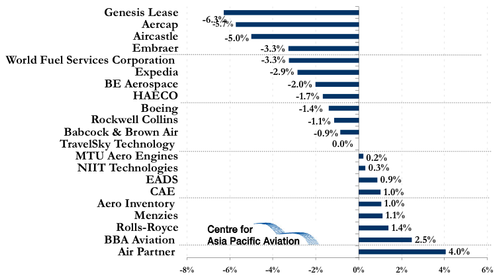