Paris 2011: Korean Air to acquire up to 30 Bombardier CSeries aircraft

Bombardier had a “great” showing on the second day of the Paris Air Show on Tuesday, signing Korean Air as its first Asian customer for the CSeries jet and second CSeries customer of the show, and securing more than USD1 billion worth of firm business jet orders. The Korean Air deal partially offset the disappointment after Qatar Airways on Monday stated it has deferred a decision on a potential order for Bombardier's CSeries.

Bombardier no doubt hopes that the Korean Air order could lead the way for further orders in the fast-growing Asian market. Announcing the agreement, Bombardier Commercial Aircraft President Gary Scott noted that the manufacturer is “changing the number of customers pretty significantly”.

“This is a marquee customer, our first customer from Asia and will be our launch customer in Asia," he added. This latest order, coming on the heels of the smaller one on Monday, is a huge boost to the programme which has until recently struggled to find its place in the market over the past few years. 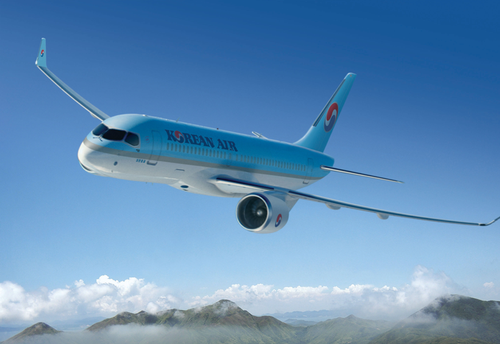 After failing to sign a single order for the CSeries at the Farnborough Air Show last year, Bombardier has had a more positive showing in Paris.

On Monday it announced a "major network carrier" signed a firm order for 10 CS100 aircraft with options on an additional six. The unidentified carrier, which will use the aircraft commercially, will be the launch customer of the CSeries aircraft with the firm order valued at USD616 million at list prices. Bombardier stated that it hopes the decision by the carrier would help the manufacturer in its sales campaign.

Continues to chase contracts for the CSeries

The Montreal-based manufacturer, which stated it does not “hoard” orders for shows, is continuing to chase contracts for the CSeries. “We are still in advanced discussions with a couple of handfuls of customers,” Mr Scott said.

Prior to the Air Show, Bombardier stated it was in final negotiations with up to 10 customers, and less advanced talks with a “handful” of others. Bombardier recently broke a 16-month CSeries order drought, with 10 aircraft for Braathens Aviation and three for an unidentified customer.

Mr Scott added Bombardier is seeking to add orders from as many customers as possible, including smaller operators, in order to create a wider asset base for the new aircraft. “We’re not against large orders. We are just as happy to have orders for five, 10, 15 aircraft, as well as 30, 40 and 50. You’ll see both,” he said.

Korean Air to acquire up to 30 Bombardier CSeries aircraft

Korean Air and Bombardier Aerospace’s LoI covers the acquisition of 10 Bombardier CS300 aircraft with an additional 10 options and 10 purchase rights. Deliveries will commence at a rate of two aircraft per quarter from 2Q2015. A definite agreement is expected to be reached in the near future. Bombardier usually announces firm orders, as opposed to Letters of Intent, as was the case with the Korean Air announcement. 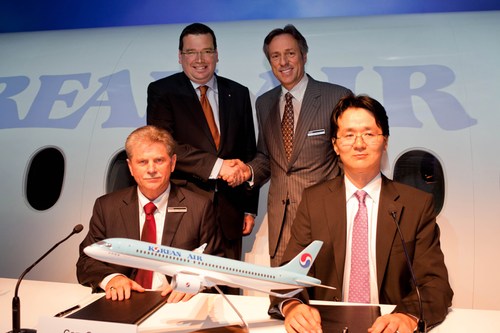 Beginning of a 'steady partnership'

"This is the first time we have bought Bombardier, but we believe that they can pull this off," said Walter Cho, senior vice president in charge of fleet planning for Korean Air. Mr Cho said Korean Air operates a fleet of 137 predominantly Boeing and Airbus aircraft, including a fleet of 31 B737-800/900s, with a further 10 B737NGs on order.

Mr Cho called the deal “the beginning of a steady partnership with Bombardier.” He continued: “We are a growing airline. We believe the CSeries fits into our fleet very well and we’ll be exercising all, well if not all, most of the purchase rights and options very soon.” He added that the options woud be exercised “as soon as the aircraft proves itself”.

Bombardier and Korean Air signed the LoI after several months of detailed negotiations with Korean Air to become the Asian launch customer for Bombardier’s CSeries programme, which has struggled to gain momentum, but has picked up four sales this month.  The firm order is valued at USD616 million at list prices.

CSeries to be used domestically and on China, Japan, Southeast Asia routes

Korean Air has determined it “can operate the aircraft with very high efficiency” on 45 routes in China, Japan and Southeast Asia. Mr Cho, in an interview with The Montreal Gazette, stated the aircraft would also be deployed on thinner domestic routes, replacing B737s, which the airline will redirect to denser city-pairs.

“We need more environmentally friendly planes and some of our airports in (South) Korea have noise issues. And some of our routes are too small for our (Boeing) 737s. So this will be a perfect aircraft for those kind of routes and airports,” he said. The CSeries jets are additions to its fleet, not replacements for older aircraft. 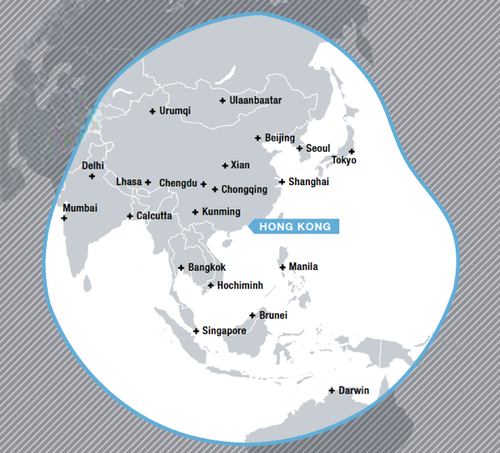 Qatar CEO Akbar Al Baker on Monday stated the carrier has “deferred the decision” to acquire the CSeries stating the decision has been deferred “for a while until we’ve sorted all the airplanes we have in the pipeline”. Mr Al Baker said he hoped to make a decision on the CSeries jet "in the not too distant future", according to reports. Responding to the comments, Mr Scott noted that the manufacturer is “in ongoing discussions [with Qatar]. We have been at this stage for some time.”

In Dec-2010, Mr Al-Baker stated the carrier remains committed to Bombardier’s CSeries regional aircraft even after Airbus announced it A320neo product. Bombardier separately stated it is “continuing to discuss” the CSeries with Qatar Airways.

Bombardier claims that the CSeries aircraft family will offer a 15% cash operating cost advantage and a 20% fuel burn advantage. The CSeries is designed for the 100 to 149-seat market, and is scheduled to enter into service in 2013. The CS300 aircraft, powered by Pratt & Whitney PW1521G engines, will enter into service in 2014. Bombardier is targeting the single-aisle market for jets with 100 to 149 seats, a market controlled by Boeing and Airbus at present.

Bombardier stated that CSeries production rates would depend on the number of orders after the aircraft enters service although it stated it hopes to be able to build production up to one aircraft per day.