The carrier also rose after it said the European Union lifted a three-year ban on aircraft that had been barred from flying to the continent for safety reasons. Spokesman Sultan Hassan stated: "Almost half our fleet of 40 aircraft had been affected by the ban. Now all our aircraft have been cleared after a safety audit and this will help us gain business."

In China, Air China and China Eastern reported quarterly profit surges due to a rebound in air-travel demand and a stronger yuan. The day before, China Southern also reported a tenfold profit jump. UOB-Kay Hian Research Pte commented: “There’s a greater propensity to travel both domestically and internationally because of the economic rebound. That’s going to filter through to the bottom line of the Chinese carriers.”

Air China’s net profit jumped 484% to USD773 million with a 438% increase in operating profits to USD1022 million, as revenues increased 77% to USD3.7 billion, outpacing a 44% increase in operating costs. Huatai Securities stated it expects Air China to maintain healthy earnings gains as long as there is no further upward swing in oil prices" adding that the recent fuel price hike is “not good news for airlines” although they have all raised their fuel surcharges accordingly.

China Eastern reported a return to operating profit with a result of USD502 million in the period compared with a loss of USD11 million in the Sep-2009 quarter with net profits soaring 5729% to USD472 million. Revenues increased 91% to USD3.3 billion with the carrier’s results also being boosted by the Shanghai Expo.

China Southern Airlines slumped 6.2% to HKD5.18 after Citigroup Inc cut its rating on the stock from "buy" to "sell", stating earnings will likely peak next year and the carrier will face competition from high-speed rail in 2012.

Air China fell 4% to HKD10.46 at the close of trading in Hong Kong while China Eastern declined 3.8% to HKD4.80. Air China has gained 72% in 2010 compared with a 73% increase for China Eastern while China Southern shares have more than doubled. In Shanghai, China Eastern fell 1.6% to CNY9.02 with Air China shares were suspended due to a shareholder meeting at which investors approved plans to purchase 39 Boeing and ten Airbus aircraft. 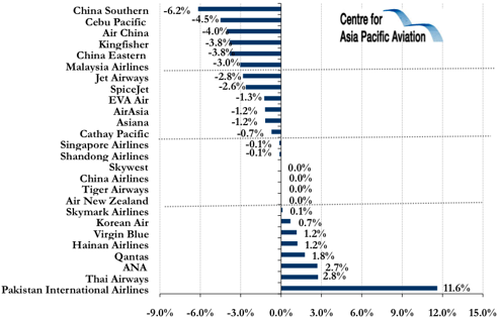