California’s Ontario International Airport is one of the four largest airports serving the Los Angeles Basin and after recording declines in passenger numbers from 2008 to 2013, the airport has returned to annual passenger growth as US airlines work to ensure that they have ample coverage in the Los Angeles metro region.

Ontario’s network mix is interesting. With the addition of China Airlines’ flights to Taiwan in 2018, Ontario is the only airport apart from Los Angeles International offering long haul service. There are unique characteristics to the Ontario area that make the flight possible, and the airport is no doubt working to capture additional international services.

It remains to be seen whether Ontario will attract more international flights in the near future but for now, a return to positive passenger growth is welcome after the airport has worked for years to regain momentum.

After passenger levels peaked at 7 million in 2007 Ontario airport suffered negative growth for the next six years, an outcome driven largely by the financial crisis and ensuing recession in the US.

But as the US economy recovered, Ontario began to post positive passenger growth in 2013. Its passenger levels jumped 12.4% year-on-year in 2018, to five million. However, that is still below the peak levels that Ontario achieved more than a decade ago. 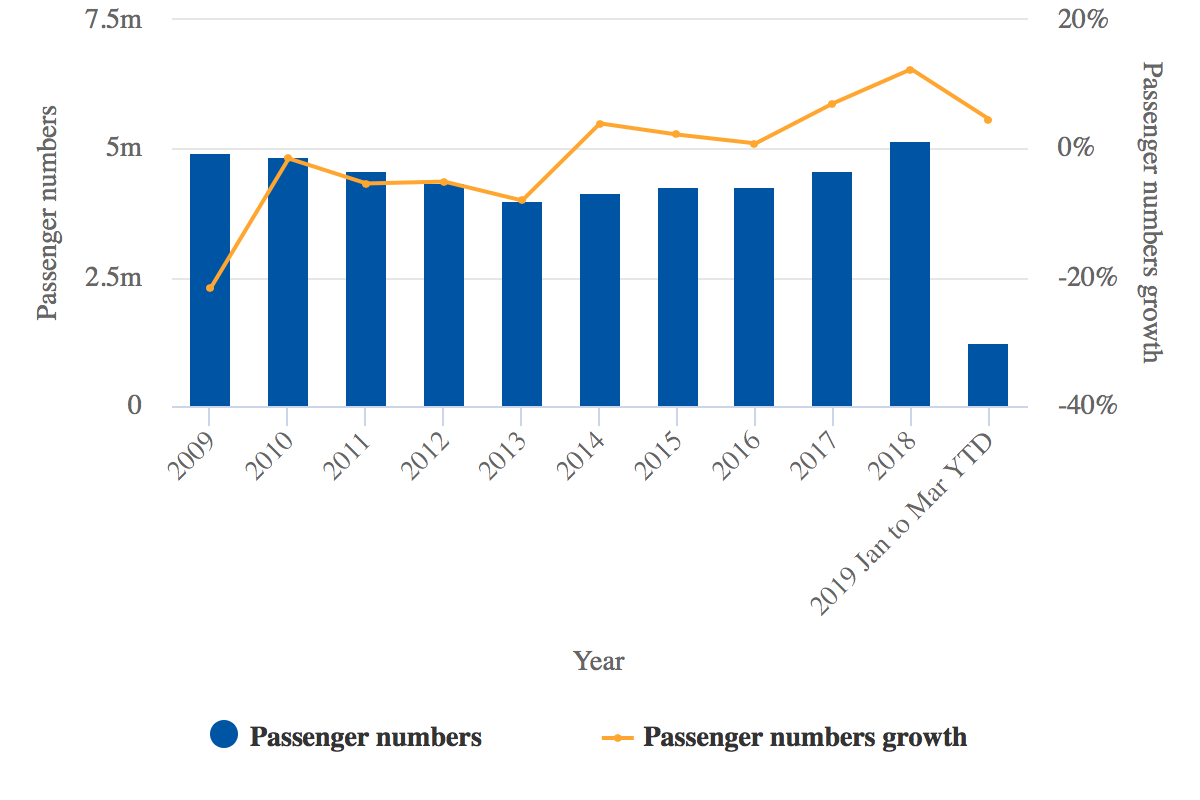 The recovery in traffic is welcome for the airport, which has a mix of operators – full service carriers, lower cost hybrid airlines and ULCCs. Southwest is the airport’s largest operator by departing frequencies, accounting for nearly 52% at Ontario. 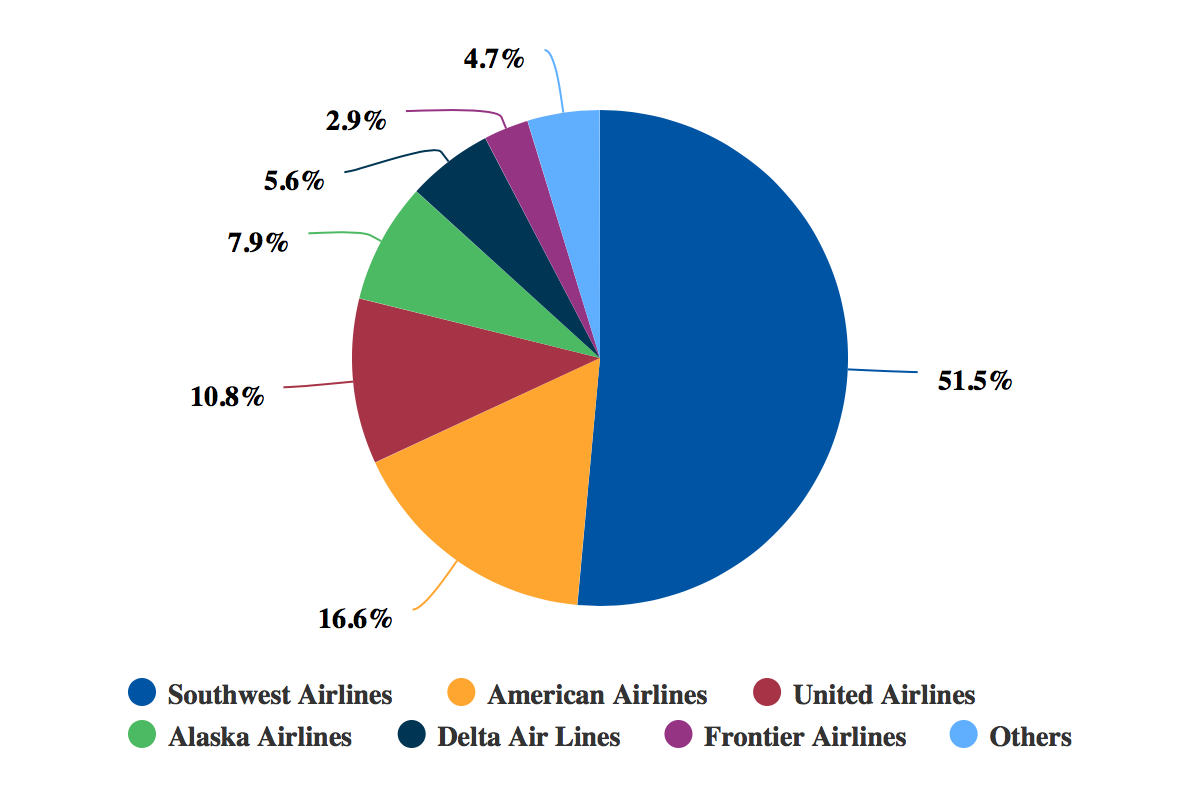 Ontario has also welcomed flights from the ULCC Frontier over the past couple of years, and presently (as of late Apr-2019), the airline operates service from the airport to Denver and San Antonio.

In late 2018 JetBlue returned to the airport with service to New York JFK – a route that the airline had launched in 2000 but shuttered in 2008.

JetBlue cited several reasons for its return to Ontario, including the fast growing San Bernardino-Riverside-Ontario metro area and affordable housing in the region. The airline also stated that the region was on track to grow by approximately 2 million over the next three decades.

Ontario International Airport data show that most of the large US airlines posted passenger growth in 2018, with Alaska Air Group and Southwest recording the largest increases of 9% and 8%, respectively.

In 2019 Ontario has welcomed new service from Delta to its Atlanta hub. The airline boasts that it is the only airline serving its Atlanta hub from all four of the largest airports in the Los Angeles region – Los Angeles International, Orange County, Ontario and Burbank.

Ontario marked a major milestone in 2018 when China Airlines introduced daily service to Taiwan. It is significant for Ontario, which is the only airport in the LA area apart from Los Angeles International to feature long haul service.

According to the Cranky Flier blog, the Ontario region has sizeable Taiwanese and Vietnamese communities that would likely prefer travelling to Ontario instead of Los Angeles. Ontario International is 63km from Los Angeles International airport.

During its first year of operations on the route, China Airlines rejigged some of its flights times and replaced a Boeing 777 with a smaller gauge A350.

Ontario offers normal incentives, but the airport needs to keep costs in check

Obviously China Airlines is enjoying incentives from Ontario for the launch of services to Taiwan. According to a report in The Daily Bulletin in late 2017, the airport’s authority agreed to waive terminal and landing fees for one year for airlines launching flights to Asia, Europe, New Zealand or South America, so China Airlines is no doubt benefiting from those waivers.

In addition to offering the normal course of incentives, Ontario also needs to keep its operating costs low for airlines in order to maintain and expand its existing service levels.

Ontario has been working to lower its costs, which on a cost per enplanement (CPE) basis have been markedly higher than those of nearby Burbank, which the ratings agency Fitch calculated to have a CPE of USD2.30 in late 2017.

Fitch concluded that Burbank has similar enplanement levels compared to Ontario, but has a “significantly” lower CPE. In late 2017 The Daily Bulletin reported that Ontario’s landing fees had fallen to USD10 per enplaned passenger, from a high of USD14.50.

There is no doubt that Ontario continues to work to lower costs for airlines operating from the airport in order to rebuild its network to levels it achieved a decade ago.

There is also an argument to be made that Ontario is the best positioned among Los Angeles’ smaller airports for additional long haul service. JetBlue was thwarted by community activists in its attempt to launch nearby international flights from Long Beach, and residents close to Burbank have also voiced concerns about noise.

Obviously numerous conditions need to be favourable for more international service, including an ability to offer airlines a favourable cost base.

Ontario International is working to sustain the rebuilding of its network

Ontario International airport has made impressive strides during the past few years in rebuilding passenger growth levels that had suffered in the US economic downturn a decade ago.

The airport obviously wants to continue to build up its network strength, but also needs to ensure that its operating costs for airlines will fall to competitive levels over the long term.