Only a few airlines collapsed in 2020

What is surprising about 2020 is not how many airlines collapsed or entered bankruptcy of one kind or another. Only around 30, out of a total of thousands.

The surprise, in an unimaginably dreadful year, where international capacity fell to around one tenth of its previous level and many domestic operations fared only slightly better,  was that so few airlines went out of business.

And, at the same time many new airlines saw fit to enter the market.

For more detailed analysis of the situation and the near term outlook, watch CAPA Live on 10-Feb-20201

Many more airlines should have collapsed in 2020, given the astonishing collapse in income, but....

In normal times, if companies had to survive for almost a year with almost no income, while facing continuing high levels of overhead costs, the airline industry would have deceased. It would be no more.

The same can't be said for the hundreds of thousands of workers who have lost jobs, and the potentially many others who will follow, once government supports cease.

But the vast majority of airlines has been able to survive. As it is, few are on solid ground today, even if most of their aircraft are. They continue to burn cash at a breathtaking rate.

Their survival to date is largely due to direct and indirect government handouts. Some airlines have received debt and/or equity support from their governments, mostly flag carriers.

And, to round the story off, a significant number of airlines have entered into (and some already emerged from) various forms of bankruptcy, Chapter 11, administration, examinership (in Ireland), enabling them to survive.

If all of this sounds like burning the furniture to keep warm till sunny days (hopefully) return, well that is pretty much the case.

There will be more failures in 2021, as reality bites

The government appetite for universal employment support looks likely to wane significantly after the end of 1Q2021, closing a vital survival source for many companies.

On the revenue side, the crunch is coming. Airlines are now entering a period where European carriers in particular look to generate the bulk of their advance purchase cash, for Easter and summer holidays. This year the signs are not bright, as COVID-19 rampages again.

There is now significant traveller reluctance to commit to paying for holidays if there is a constant risk of new border shutdowns and quarantine requirements. Even very generous refund or transfer conditions are not succeeding so far in convincing the great bulk of consumers to put their money down. One outcome is that booking periods are narrowing substantially, in the meantime starving airlines of the upfront cash.

In the US domestic market too, where seat numbers are tracking at around 55% of (pre-pandemic) early Feb-2020 levels, airlines are finding yields anywhere from 15-20% lower than the previous year, and load factors remain well below previous breakeven levels. Daily deaths in the US from the coronavirus still range between 3,500 and 4,000 daily.

And through all this, there are very clear signs that business and corporate travel will be slow to recover, reducing valuable premium paying customer numbers, a vital part of full service airline income.

Burning the furniture was mostly a "strategy of hope", but vaccinations may change things

A "strategy of hope" is of course no strategy at all. Worse, it allows airlines to avoid the seriously difficult decisions to undertake radical change for a new environment.

The industry has largely passed through the phases of blaming governments for not opening borders, as the resilience of the coronavirus became clearer. So now all hopes are pinned on vaccination being the salvation.

As vaccination rates accelerate under the new US administration - and while Europeans squabble about who gets it first - there are grounds certainly for optimism. The UK, going through a horrific phase, has an accelerated vaccination programme and there are hopes of quelling the outbreak by mid-2021. If correct this is very good news, but it may come too late for many airlines to generate the cash they need, to keep the fires burning.

In Asia Pacific (other than the South Pacific, where the pandemic has largely been contained, so far) there has recently been a revival in outbreaks, endangering hopes of international "bubbles" and "green corridors". Parts of Africa and the Gulf region are also experiencing new outbreak surges. In many countries in Latin America the pandemic is still raging, but region-wide seat numbers are back to around 50% of the pre-COVID Feb-2020 levels.

Not the least of the barriers to recovery in all markets will be persuading travellers back into the air.

Then, internationally, there is the added issue of governments cooperating - or not - to establish common principles for opening their borders and for example for recognition and acceptance of vaccine passports. The situation here could generously be described as confused and uncoordinated.

Airlines which ceased operations in 2020

Several "virtual" airlines entered the market. Could this model become a significant force in future? 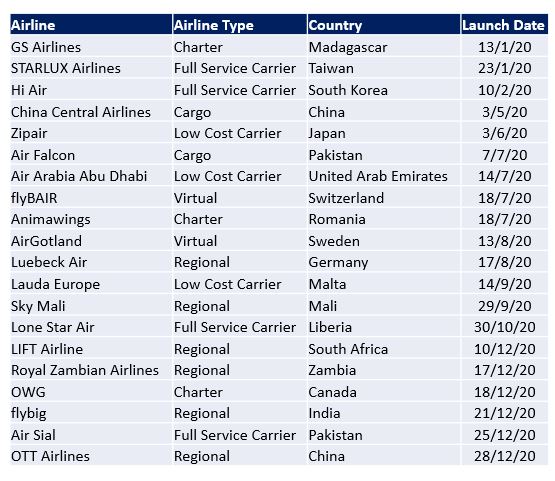