Oman’s Minister of Transport and Communications Dr Ahmed bin Mohammed bin Salim Al Futaisi announced in early Nov-2014 that Oman may open its market to a private LCC. This follows flag carrier Oman Air's decision not to establish its own LCC subsidiary.

Speaking to the Times of Oman newspaper Dr Al Futaisi announced that the government is “conducting a study to introduce a new airline, like budget airline”.

The Minister's intention is that at least one new operating licence, and possibly more, would be awarded to a private operator through a tender process. A similar approach has already been tried in Saudi Arabia, in both rounds of its liberalisation efforts, with mixed success.

Oman’s Public Authority for Civil Aviation had hoped that the country would have a domestic LCC by 1H2014, to better serve Oman’s local market of three million people.

Oman’s aviation market has been one of the Middle East’s stronger performers over the last five years, particularly among the smaller regional centres. Traffic at Muscat has handily outperformed similarly sized regional hubs such as Kuwait, Bahrain (Manama) and Amman. 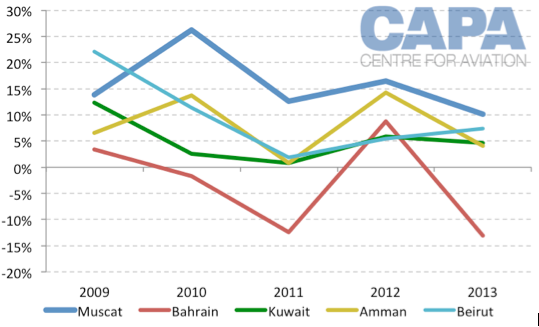 This growth has been thanks in no small part to the new strategic direction of Oman Air. Since 2008, the government of the Sultanate has developed the airline from a regionally-focused offshoot of Gulf Air (of which Oman formerly controlled a share), into a multi-level network carrier with a luxury-focused brand.

Traffic at Oman Air increased from 2 million passengers in 2008 to 5 million in 2013. However, while the carrier has expanded its fleet and network and introduced new on-board products, it has suffered more than USD1.3 billion in losses during its transformation. 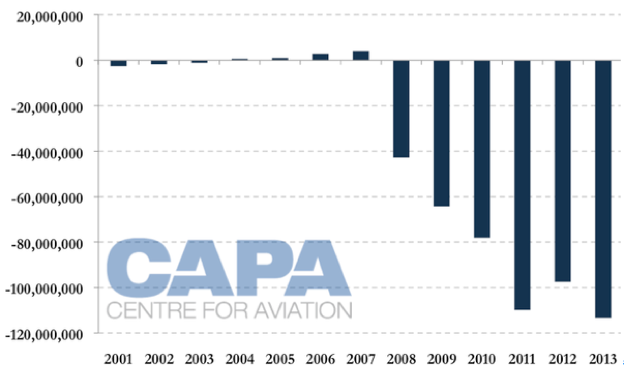 Losses at Oman Air are expected to continue, albeit at a reduced scale, until at least 2017. The Omani Government views the carrier as a national strategic asset, rather than a commercial enterprise, and it will continue to receive government funding to keep it afloat. The scale of its bottom line losses needs to be measured against its contribution to the national economy in term of travel, tourism, employment of Omani nationals and general economic health.

The LCC market in Oman, as well as in the Middle East more generally, remains under-developed. LCCs account for 15% of seat capacity at Muscat Airport, and about 20% at Salalah. The largest LCC market shares are held by flydubai and Air Arabia, with Indian carrier’s Air India Express and Indigo also contributing.

LCC penetration in Oman is a little above the norm for the Middle East. Due to the youth of the low cost model in the region - the first Middle East LCC, Air Arabia, only started operations in 2003 – and the regulatory situation, LCCs account for around one in 10 seats operated to/from the region and about one in six seats operated within it, well behind global averages. 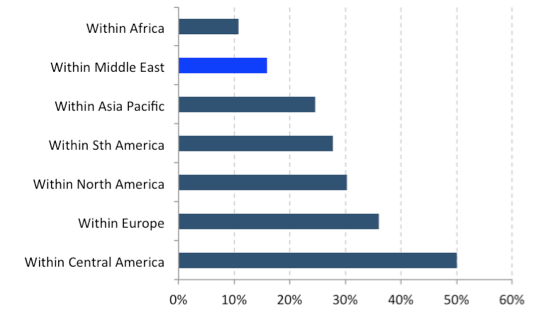 Barriers to LCC entry in the Middle East - even in the comparatively liberal markets - are typically unusually high. Government ownership of national carriers, as well as airports and related aviation-services companies is the norm, and most governments see private competition as detrimental to their national airlines.

The airport situation, although better than a decade ago, is also unfavourable to LCCs. Few European/US style secondary airports exist, and some regional LCCs have experienced problems achieving the high aircraft utilisation rates and low turnaround times typical of the model. With a few exceptions, most of the region’s larger airports have high aeronautical fees and charges and ground handling operators that are primarily focused on serving full-service providers. Ground handling is often controlled by government-owned carriers or is subject to a monopoly - and therefore usually costly.

Despite these institutional obstacles, the regional LCC market has been growing rapidly. Fed by the region’s growing economies and population, as well as the large domestic worker traffic flows and the developing tourism flows to/from the Middle East, low cost airlines have now become a major part of the region’s aviation landscape. 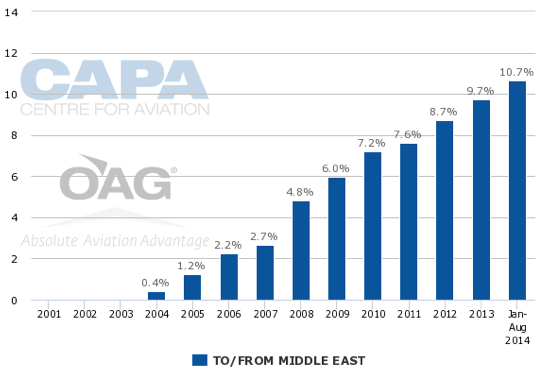 Air Arabia and the government-owned flydubai are now major regional operators, with networks linking the Middle East and operations into Africa, Central Asia, the Indian subcontinent and Europe. Jazeera Airways has also performed well, turning itself around into one of the world’s most profitable airlines, despite being forced to abandon its own multi-hub expansion plan due to regulatory interference.

Some LCC operators, such as flynas, have not had the same success, and although they have managed to stay alive but have not yet been able to live up to the potential of the market. Others such as Bahrain Air, RAK Airways and Sama were unable to adapt to the region’s regulatory environment and folded.

Oman Air is no longer interested in an LCC subsidiary, seeks to expand its own capacity

National carrier Oman Air had previously been in the frame to operate an Oman-based LCC. The Public Authority for Civil Aviation announced in mid-2013 that it had granted approval to the carrier to launch an LCC subsidiary. The move was seen as a defensive measure to counter the expansion of LCCs such as Air Arabia and flydubai.

However, under the control of new CEO, Paul Gregorowitsch, Oman Air has abandoned thoughts of its own LCC unit, in favour of focusing on its own fleet expansion. Oman Air has 17 aircraft on order, including six 787-8s and another three A330-300s. It is eyeing a major narrowbody order for next generation types such as the Boeing 737 MAX. The carrier is due to take delivery of the remaining eight 737NGs it has on order by the end of 2015.

According to Mr Gregorowitsch, having Oman Air run an LCC would make little sense, as traffic rights would have to be transferred from the national carrier, and the unit would cannibalise traffic from its owner. Instead, he believes Oman Air can use its declining cost base to develop attractive low-fare, full-service offerings, to compete with the two-class product offered by foreign LCCs in the local market.

A new LCC player in the market would obviously have some competitive overlap with Oman Air, depending on what route rights it could obtain. Major Middle Eastern trunk routes where Oman Air already has significant capacity, including Dubai, Abu Dhabi, Doha, Jeddah, Riyadh and Bahrain – where - would be obvious candidates for any LCC start-up operation. However, there are plenty of underserved markets in the region – Oman Air’s Middle East network outside of the GCC only includes Tehran, Shiraz, Amman and Beirut.

Indian subcontinent workers accounting for almost a third of Oman’s population, so destinations in India, Pakistan and Bangladesh, would also be prime markets for an Oman-based LCC. Oman Air’s network on the high-volume Indian subcontinent routes includes 11 Indian destinations, three in Pakistan, and once city in each of Nepal, Bangladesh, Sri Lanka and the Maldives.

Oman’s connections to the Levant and North and West Africa remain under-developed. There are also a number of routes operated within the Middle East where Oman Air enjoys monopoly operator status, including Shiraz, Amman, Ras Al Khaimah and Tehran.

Oman needs an LCC to broaden its market

Oman’s economic diversification plan - aimed at ending the domination of the country’s petrochemical export industry – needs this kind of liberalisation. The aviation and tourism sectors are seen as critical future economic contributors.

Oman has particularly ambitious tourism development plans. The sultanate has already approved the spending of around USD8 billion on tourism-related property developments, and Oman’s tourism plans call for expanding tourist visits by better than 7% p/a, to increase total tourist visits in the country – including domestic tourism - to 12 million by 2020. In 2013, the tourism industry accounted for around 7% of total GDP, with 1.3 million international tourists visiting the country.

On the aviation front, USD6.1 billion is planned for aviation infrastructure investment, including major terminals at Muscat and Salalah airports, as well as development of four new regional airports. However, even with the fleet growth planned by Oman Air, significantly more airline capacity will be needed in Oman’s aviation market if it hopes to reach its tourism goals.

If Oman is to make these investments pay off, it needs more airline capacity to bring in tourists and other travellers. Oman is not trying to replicate the model of the GCC hubs at Abu Dhabi, Dubai and Doha; Oman Air has only modest ambitions in this regard. With strong demand for air travel from both locals and expatriates, there is huge growth potential for a locally based LCC in Oman.

With strong passenger growth and a broad aviation market despite the small passenger base, there is plenty of room for a low cost operator in Oman. If the country decides to open itself to one (or more) local LCCs, it should encourage significant travel and tourism flows.

LCCs have been proven to be major growth enablers, capturing new traffic not just through increasing capacity, but by opening up new passenger market segments and developing new route pairs. More LCC success will come as more markets in the Middle East embrace deregulation and commercialisation, but the conservative thinking that still governs bilateral access means that this will be a slow and lumpy process.