Oman to restructure organisation of its civil aviation sector

The newly created Oman Public Authority for Civil Aviation (PACA) has announced that it plans to implement a major round of restructuring for the country’s civil aviation industry to support the country's ambitious goals for the aviation and tourism sectors. The authority, which was established in Apr-2012 by royal decree to replace the existing Directorate-General of Civil Aviation and Air Navigation, will appoint a consultancy to help it with the organisational redesign of Oman’s aviation management.

PACA’s mission is to ensure the development of best practice in aviation in Oman and restructure the organisation of aviation in the country to meet the increasing flow of traffic into its airports, as well as in its airspace and the airspace of the Gulf region more generally. PACA will also adopt a supervisory role for all aviation in the country, ensuring that operations in Oman meet international safety standards. In addition, PACA holds joint responsibility for the marketing of the Sultanate's airports around the world, in collaboration with existing stakeholders. It is also the controlling body for bilateral air services agreements.

Like many other countries in the Gulf Cooperation Council, Oman is turning away from dependency on oil as the underpinning of its economy. Tourism has been selected as one of the sectors that Oman will develop its future economy around (along with manufacturing, information technology, trade and agriculture). Oman will modernise it organisational approach to managing aviation, which is the dominant method of travel for international tourism into the country.

A new organisational structure will be devised and then proposed for PACA in 4Q2012. The restructuring will be aimed at ensuring that PACA puts in place comprehensive standards to govern civil aviation and air transport activities. PACA has been granted regulatory and financial autonomy, as well as responsibility for aviation safety in Oman. The body has also set out a goal of ensuring that Oman is able to keep pace with the stiff competition in the aviation environment in the region.

One of the key areas that Oman is seeking to address is its aviation workforce and training infrastructure. Oman has been busily rehabilitating its national manpower management scheme, as part of the economic and political reforms implemented in the wake of the Arab Spring protests and the country’s ongoing "Omanization" process. Oman wants to bring its training in the field in line with international requirements, as well as ensure employment stability for Oman nationals.

Given the projected demand for specialised positions in the civil aviation fields, aviation training is not just good for domestic development – where lingering discontent over high unemployment rates and demands for political reform remain – but also a potentially lucrative field for Oman. Boeing projects the need for 32,700 pilots and 59,500 maintenance personnel in the Middle East over the next two decades. Demand in other specialist areas, such as air traffic control and aerospace manufacturing, is similarly high in the region.

Investing for the long-term

As part of its national development programme, Oman has recently committed to heavy investment in its national aviation infrastructure. Overall, Oman has invested more than OMR10 billion (USD26 billion) in tourism and travel related projects over the past decade. Another USD11 billion is to be invested in major infrastructure projects under the latest five-year plan.

It has underwritten Oman Air’s development as a national carrier over the past five years, doling out for its fleet and personnel expansion. It has also been willing to bear the increasingly heavy losses that the carrier has sustained since 2007. The objective is to see Oman Air positioned well enough in the market to eventually reach a position where it can be a sustainable, profitable carrier.

The country is significantly expanding its two main airports at Muscat and Salalah, as well as developing new regional airports in Sohar, Adam, Ras al Hadd and Al Duqm, to ensure that there is sufficient capacity to handle projected  growth. These airports will see investment of OMR2.1 billion (USD5.4 billion) during the five-year plan period. The Muscat International Airport development is the largest civil engineering project to ever be undertaken in the country.

Thanks to the investment, travel and tourism are well on the way to becoming one of the pillars of Oman’s economy. Tourism’s share of GDP was estimated at 3% in 2010, up from less than 1.5% in 2005. Under the country’s 1995-2020 development plan, one of the key objectives is to increase tourism into the country to 12 million passengers p/a by 2020, up from around 1.6 million tourist visits in 2010.

Key to supporting this is continued growth of Oman Air. Since 2007, Oman Air has developed from a regionally focused adjunct to Gulf Air into a multi-level network carrier, operating not only across the Middle East to Africa, Asia and Europe.

Over the past five years, the carrier has expanded its fleet significantly, phasing in three-class A330 widebodies and two-class Embraer regional jets and taking most of its smaller turboprops out of service barring a couple of ATR 42-500s for domestic operations. It has orders for six Boeing 787s, which will form the core of its future long-haul fleet and are due to start delivery in 2015.

The carrier’s network has doubled to more than 40 destinations and its traffic has more than doubled, with the carrier handling more than 3.8 million passengers in 2011, despite the regional unrest that affected traffic in the Gulf early in the year. Passenger numbers at Oman Air have increased 250% since Oman took over in 2007, while RPKs have increased 360%. 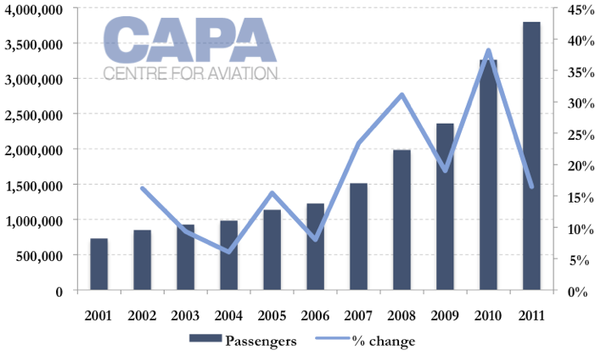 Oman Air’s primary focus has been on point-to-point traffic, connecting the Middle East and key destinations in Asia, Africa and Europe with Oman. The carrier’s strategy is intrinsically tied to Oman’s ambition to develop itself as premium tourism destination. CEO Wayne Pearce, who took over from change spear-header Peter Hill tells CAPA the carrier is looking to build a limited virtual network, with North America – and East Coast cities – a particular target. (The region is out of range for its current widebody aircraft, A330s.) Oman Air would ideally look to transfer passengers over common European ports; its European destinations include Frankfurt Airport, London Heathrow Airport, Milan Malpensa Airport, Munich Airport, Paris Charles De Gaulle Airport, and Zurich Airport. Oman air is open to codeshares and interlines.

Even with Oman Airways adding services to London, Frankfurt, Munich, Paris and Milan in Europe, and to Bangkok, Kuala Lumpur and Southeast Asia, the carrier is not aiming to serve as a bridge between east and west, as its bigger peers in the region aim to. The new destinations added by the airline have been chosen for their potential for high yielding tourism and business traffic, rather than transit volume.

As part and parcel of the strategy, Oman Air has drastically improved its on-board product, with a particular emphasis on its premium cabins. The carrier’s new business class product has edged out that of larger rivals such as Qatar Airways and Emirates and won multiple awards, as well as a four-star rating from Skytrax.

Outside of Europe and Southeast Asia, Oman Air has developed extensive connections into the India sub-continent region to capitalise on the rapid growth in traffic between the two regions. India is Oman’s fifth largest trade partner and the market between the two countries has seen extensive growth, with more than 720,000 Indian expatriates in Oman. Oman Air serves 10 destinations in India, three in Pakistan and one each in the Maldives, Nepal, Sri Lanka and Bangladesh.

Outside of Oman Air, the government of Oman is future proofing its aviation infrastructure with a series of ambitious airport development programmes. New airports are being developed at Muscat and at four regional destinations, while the country’s second international airport at Salalah is undergoing a major upgrade.

The development of Muscat International Airport is the largest civil engineering project ever undertaken in Oman. The project is proceeding rapidly, with 45% of the first phase of the development completed in less than 12 months. The first stage of the development is expected to be completed by the end of 2013 and the new airport, located only 30 km from the existing airport, is expected to become fully operational in 2H014, after a six-month operational work up period.

The four smaller airports at Sohar, Ad Duqum, Ras Al Hadd and Adam, will add combined capacity of around 1.75 million passengers p/a once completed. More importantly for Oman, the airports will be significant economic enablers for their regions, providing gateways for business, tourist and freight traffic to regional destinations. The new airports are expected to directly create around 4,000 new jobs in the Sultanate.

The Sohar Airport development will be tied into a major multimodal transport hub project for the Batinah region, while the airport at Ad Duqm is planned to facilitate development of the coastal city as Oman’s next major industrial and shipping hub. The Ras Al Hadd Airport is being tied into a larger plan for the development of an eco-tourism industry in the Sharqiya region. The small Adam airport in Oman’s interior went into limited operation in 2010 and is due to go into full operation by 2014.

Like many Gulf states, Oman is developing its aviation system with an eye to the future. The pay-off on such a broad-ranging shake-up is inevitably a delayed one, but the scale of Oman’s ambitions are such that it is willing to sustain the pain now, in the hopes that aviation and tourism will become key components to its economy. The country’s civil aviation laws are being redrafted to match the development of the aviation sector. When this is in place, the Sultanate will then be able to develop a long-term strategy covering its aviation requirements for the coming decade.