Oman Air gets another capital injection; but it contributes a billion dollars to Oman's economy

Oman’s investment in creating a national carrier continues to be a costly one. Oman Air has reported that losses for 2013 increased 16%, to OMR113.34 million (USD294.1 million).

Following on from the losses of OMR97.5 million (USD253.2 million) in 2012 and OMR109.9 million (USD285.4 million), the latest rush of red ink has forced the Sultanate of Oman to bail out the airline again, this time via an OMR200 million (USD519.5 million) capital injection. The government justifies the investment on the grounds of the wider economic benefits the airline brings. But this seems so be leading to substantial staff cost blowouts (up 36% in the three years to Mar-2013)v, always a risk when the bottom line is underwritten.

During 2013, Oman Air's revenues increased 10% year-on-year, to approximately OMR382 million (USD992 million). Traffic expanded 13%, to a little under 5 million passengers. The carrier launched new services between Salalah and Jeddah, and between Muscat and Madinah, as well as increasing frequencies from Salalah. ASKs rose 11.2% to 14.9 billion. 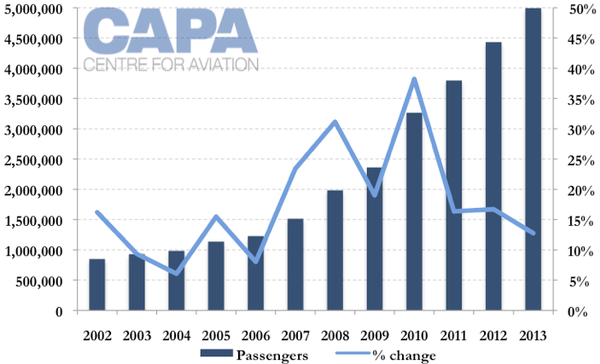 Cargo traffic meanwhile expanded by 15%, to 119,785 tonnes. In Mar-2013, Oman Air signed an exclusive block space agreement with DHL, utilising the company's capacity in both directions on its air cargo operation between Muscat and Dubai.

The announcement of the worsening loss at the carrier comes just a month after the retirement of CEO, Wayne Pearce. His departure comes prior to both a major fleet expansion and restructuring at the carrier, which would have necessitated Mr Pearce remaining in the position for another two to three years to see the process through. A successor has not yet been named.

Traffic expanded by around 1 million passengers p/a, with growth rates roughly in-line with the regional average in the Middle East. Average passenger load factor improved to around 76% to 77%.

On-time performance and in-flight service levels, particularly in Business Class, are now ranked among the best in the Middle East. Mr Pearce built on a platform set by his predecessor, Peter Hill, who led a top-to-bottom rebranding and complete change in strategy for Oman Air.

Despite the positive operational signs, Mr Pearce was able to do little more than stabilise the losses at the carrier, and Oman Air remains deeply troubled financially.

Since switching from a position as a niche regional airline and feeder carrier for Gulf Air into fully-fledged flag carrier for Oman, losses have steadily worsened to around OMR100 million p/a over the past three years. 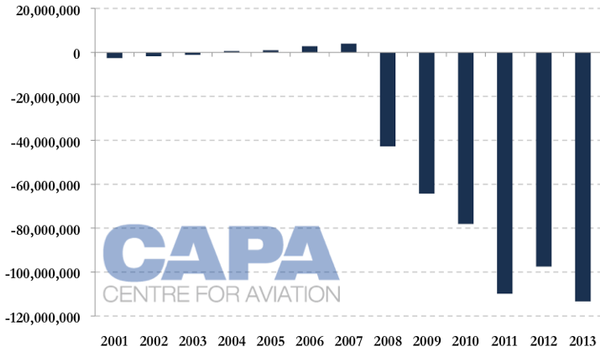 Even though the carrier has lost OMR506 million (USD1.3 billion) since 2008, the Sultanate of Oman will continue to underwrite the carrier, as it brings a net benefit to the country, in terms of tourism, employment and general economic health. In this case, Oman is similar to several other small GCC states, notably Bahrain (Gulf Air) and Kuwait (Kuwait Airways), where the governments have proved willing to support loss-making state-owned carriers due to their overall financial contribution and strategic important to the economy of the country.

Oman Air chairman Darwish bin Ismail al Balushi, who is also Oman’s Minister Responsible for Financial Affairs, reported that a study commissioned by the airline showed that the direct and indirect contribution of Oman Air to the Omani economy over 2013 was as much as OMR400 million (USD1,039 million), “which more than offsets Oman Air’s financial debt to the nation”.

Omani nationals account for 64% of Oman Air’s workforce of more than 5,500. In 2013, the carrier committed OMR2 million (USD5.2 million) to staff training, including full academic scholarships for 100 employees to improve administrative and technical qualifications. Since the start of 2013, 38 Omani candidates have joined the carrier’s commercial pilot’s licence, airline transport pilot’s licence, 737 type rating and ATR type rating courses, in the Middle East and Europe. By the end of Dec-2013, 33 Omani trainees had joined Oman Air as pilots.

Wages at Oman Air have been increasing rapidly, with the Omani Government reacting to social dissatisfaction brought on by the Arab Spring, as well as industrial action at the carrier. In 2011, Oman Air and the Omani Government agreed to new wage scales with staff, including a doubling of some salaries.

In mid-2013, the carrier reported that between Dec-2010 and Mar-2013, staff salaries had increased by an average of 36%, with even the lowest paid roles at the airline “paying significantly more than the statutory minimum”. Oman Air’s employer’s contributions to social insurance have also increased.

Oman Air has also attributed the widening loss to its continued investment in new aircraft. During 2012 and 2013, it added new Embraer E175 regional jets and Boeing 737NG narrowbodies, rounding out what is already a diverse fleet mix for a comparatively small carrier.

If the increasing scale of losses at Oman Air in 2013 were due to its expanding fleet, then the prognosis for its bottom line is not positive. According to Mr al Balushi the first of 20 new aircraft the carrier has on order will arrive later in 2014, which will “signal the start of a major new phase in Oman Air’s growth”.

Over the next two years, Oman Air plans to introduce 16 new aircraft and take eight older aircraft out of service. The new aircraft, as well as retrofits on existing aircraft to increase seat count, are expected to see the airline’s capacity increase by almost 50% by the end of 2015.

The introduction of the new aircraft will reduce Oman Air’s average fleet age from nearly seven years to around four years, which is comparable to some of the most aggressive Gulf airlines such as Emirates, Etihad Airways and Qatar Airways. 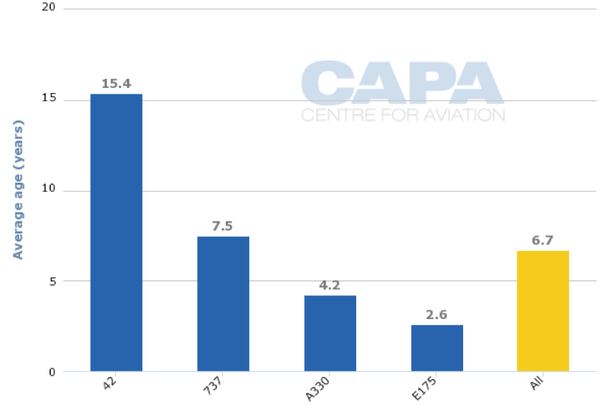 More Boeing 737NGs are due to join the carrier’s fleet during 2014, including the first of the higher capacity 737-900ERs. Oman Air expects these aircraft to deliver unit cost improvements and capacity enhancements for certain routes, although it has not announced how it will configure the aircraft.

The first of three A330-300s, ordered in mid-2013, will arrive at the carrier by Nov-2014. These will be operated on new medium and long-haul routes such as Jakarta and Manila. Reinforcing its long-haul growth, Oman Air is due to take delivery of the first of six 787s from 2015 onwards.

Oman Air has orders for 20 aircraft and plans to expand its fleet to around 50 aircraft by 2017, so more orders are due from the carrier. Prior to Mr Pearce’s departure from the carrier, he noted that an additional order for 787s was under consideration. The carrier is reportedly looking at higher capacity aircraft, including the 787-9 and more A330-300s.

The airline is also looking at further growth beyond the 2017 timeframe, possibly expanding its fleet to 70 aircraft by 2022. Oman Air is developing itself as a full network carrier and sees a fleet of more than 50 aircraft as a necessity to generate efficiencies of scale. It will remain focused on serving Oman and its cities, rather than pursuing the sixth freedom strategies of the larger Gulf carriers.

Oman Air's outlook is confident, but restructuring and more losses loom for 2014

Oman Air remains confident in its outlook. Mr al Balushi has taken an optimistic tone, stating the upcoming major expansion in capacity will allow the carrier’s management “to tackle Oman Air’s deficit and move toward profitability”. The increase in the company's share capital to OMR700 million (USD1.8 billion) would "further assist" the airline's progress.

Oman Air is also due for a major change in its structure later in 2014, to stem some of its losses. In late Mar-2014, Mr al Balushi announced the Omani Government plans to break up the carrier into three units, as part of a restructuring phase.

The restructuring will be handled carefully, implemented in a “gradual and sustainable manner” to ensure minimal dislocation for the carrier’s staff and continuity between the business units. Saudia has undergone a similar process leading up to privatisation, although the process has been drawn out over better than five years.

Once the split up occurs, Oman Air’s business units will continue to operate under a group structure, to take advantage of the synergies among themselves and with the core Oman Air business. Final decisions and related timescales for the process will be announced following consultations with the Omani Government.

Losses and restructuring notwithstanding, Oman Air will continue with its expansion plan, adding destinations as more aircraft enter its fleet and improving service and in-flight standards. As the carrier enters its third decade of operations, its primary goal remains not to operate as a financially sustainable carrier, but as an economic instrument to promote Oman as a tourism and investment destination, as well as to increase Oman’s human resource capital in the aviation and airline sectors.

See related report: Arab Air Carriers show that not all are created equal, but the rest of the world can learn from them