Some members of the public were incredulous last year after Qantas announced it would cut its London capacity by over a third in Mar-2012, months before the summer 2012 Olympic Games being held in London. They saw the Games presenting a large traffic opportunity and thought Qantas should wait for the Olympics to pass before reducing London capacity. But in fact the Olympic Games or any sporting event when held in a large city present little uplift. While leisure demand increases, corporate traffic tends to whittle.

British Airways and Virgin Atlantic, some of the most exposed to London, expect no notable uplift from the Olympics. During the 2008 Olympic Games in Beijing, airlines recorded traffic – and financial – losses as security measures stunted growth.

"The Olympics is not a big bonus for the airline in the short term," said Willie Walsh, CEO of International Airlines Group (IAG), which includes British Airways and Iberia. "At best it will be neutral, possibly a slight negative impact."

Mr Walsh, speaking earlier this year at IAG's 1Q2012 results, remarked that "History shows that the Olympics tends to have a dampening effect on some business travel through the period. So, you get a change in the mix of your customers through this."

British airspace controller NATS told Bloomberg it expects 500,000 extra passengers to visit the UK as part of the Games, with a traffic peak on 13-Aug-2012 with 45% extra passengers – 138,000 – to pass through London Heathrow. To prepare for the additional traffic, Heathrow owner BAA has spent in excess of GBP20 million. "We won't get anywhere near a 10th of that money back," BAA's Nick Cole told Bloomberg. "We're keen to make sure the Olympics goes well, but you could argue it's more about reputation than money."

Traffic will be concentrated at Heathrow, but London City Airport has been bullish on growth prospects, especially owing to its convenient location – "15 minutes from the Olympic village," London City sales director Bernard Lavelle told CAPA. But elsewhere in the city, as airlines know too readily, the most popular airport – Heathrow – is already congested with no opportunity for growth. 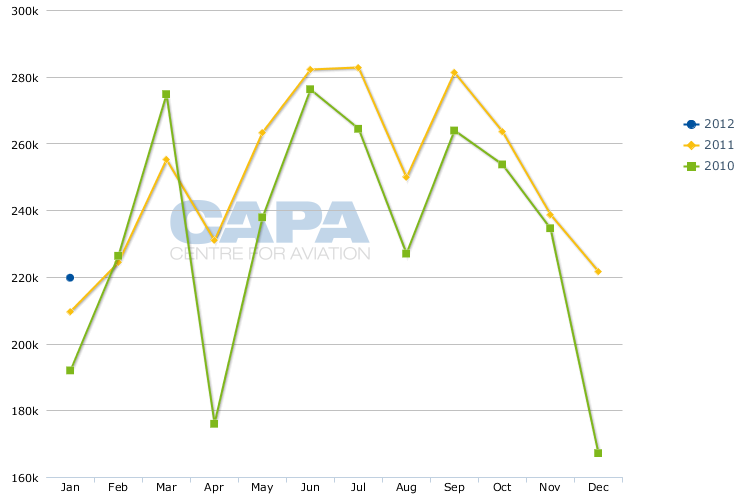 China fared far worse and saw declines during the 2008 Games in Beijing due to security measures aggravating neutral growth. As CAPA wrote in 2008:

Security arrangements for the Olympics played a role in savage reductions in passenger load factors recorded by Chinese carriers [in Aug-2008]. Air China’s international load factors slumped 13.8 ppts to 69.9%, as passenger numbers fell by almost one quarter (-24.3%) – not the outcome the airline may have expected when it signed up to become the official Olympic Games carrier several years ago. Air China’s domestic passenger numbers also fell 14.7% last month, resulting in a 12 ppts fall in load factor.

From 20-Jul-2008 to 31-Aug-2008, scheduled services at Beijing Capital Airport were cut by 7% to 1250 per a day due to Olympics-related security measures. In Air China's third quarter, which is traditionally one of its strongest and which included the Olympic period, passenger numbers fell 9.4% to 8.7 million, leading it to report a CNY1.9 billion (USD301 million) loss in 3Q2008, compared to a CNY2.2 billion (USD349 million) profit in the previous corresponding period. It was the carrier's first quarterly loss since it listed in Shanghai in Nov-2006.

The experienced was not confined to Air China. Cathay Pacific Airways at the time remarked the Beijing Olympic Games combined with two typhoons had "negative impact on passenger numbers for [Aug-2008]”. The post-Olympic buzz failed to materialise as well, with China Eastern Airlines director Luo Zhuping in Oct-2008 saying that "traffic did not pick up after the Olympics as we had previously expected".

Domestic demand in Sep-2011, during the middle of the games, fell as the market perceived greater infrastructure challenges than existed, as well as the shifting of school holidays from September to October reducing demand. Short-haul international routes saw demand increase 2.7%, but not enough to match the 6.7% increase in capacity.

And the next summer games: Brazil races to improve airports

While the Olympics may not bring a short-term benefit to airlines, they do bring long-term awareness as well as push to complete infrastructure projects, like Beijing's Terminal 3 opening ahead of the Olympic Games. Brazil for some years now has been under fire from IATA to improve its airports. Then-director-general Giovanni Bisignani said in 2011 that 13 of Brazil's 20 largest airports could not cope with existing demand, let alone projected growth associated with Brazil's economy. "To avoid a national embarrassment, Brazil needs bigger and better facilities for the 2014 World Cup and the 2016 Olympics," he said.

Brazil has since begun an initiative to privatise its airports to spur development.