After six days of steady falls, oil prices have rallied late in the week, after threatening to go below USD70 per barrel. The interplay between the recovery of the US economy and oil prices continues, with better US jobless figures helping to trigger the late week rally.

A softening US dollar and better performance across global equity markets also helped the price of crude to bounce back above USD73 per barrel.

PetroChina, the largest oil company in Asia, forecasts that crude oil prices could continue their present instability. Oil prices may “fluctuate drastically with high frequency” in the near future, due to US currency fluctuations and speculation. PetroChina’s profits were up 71% year-on-year in 1Q2010, but 1H2010 profits gained only 29%, as government price caps on petrol and diesel reigned in earlier gains.

OPEC is expected to tighten crude shipments marginally from next month, cutting its exports by approximately 0.3%. The cut amounts to a reduction of approximately 70,000 barrels per day. 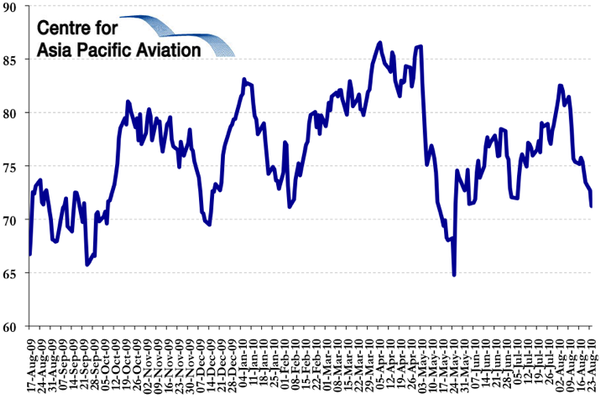 Jet fuel margins declined in concert with the three-week downwards trajectory for oil prices. Since early Aug-2010, prices have declined from approximately 227-220 cents per gallon to 202-197 cents per gallon this week. Los Angeles prices declined the most, down 4.3% to 200.55 cents. Amsterdam-Rotterdam-Antwerp prices also dell sharply, down 4.2%. 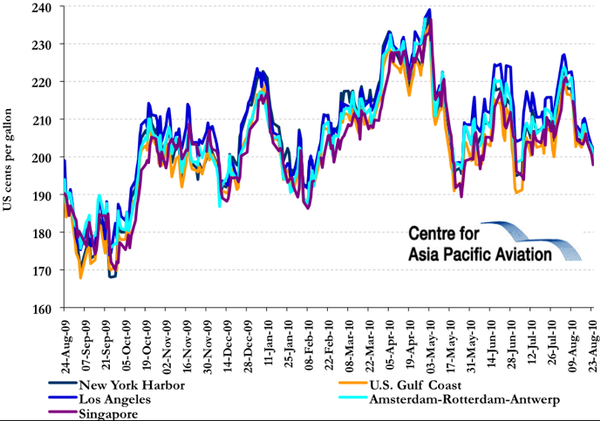