Oil creeps higher, but jet fuel hits record low in the US in Jul-2009

Oil prices continue their seemingly relentless march upwards, topping USD70 per barrel at the end of this week, although the aviation industry is seeing some relief. According to the US Bureau of Transportation Statistics, aviation fuel prices in Jul-2009 were USD1.90 per gallon - their lowest point in five years.

With passenger traffic still down, and airlines cutting capacity by almost 4% this year, demand for jet fuel has slackened considerably.

OPEC decided this week to maintain current crude oil production levels, despite slowly increasing inventory levels. The production group cautioned against “oversupply in the market” and expressed “great concern about the magnitude and pace of recovery”. OPEC makes its next decision on production levels in Dec-2009, shortly after the Copenhagen conference on climate change.

However, some more tightness could be entering the market shortly. Oil prices hit a high of USD72.44 on Wednesday, due to a combination of factors, including news from the US Energy Information Administration that crude inventories fell by 5.9 million barrels, well above market estimates. The International Energy Agency reported that the decline in global oil demand in 2009 will be less severe than previously forecast, and has now forecast consumption would rise in 2010. US dollar weakness also helped to drive the price increase recently. 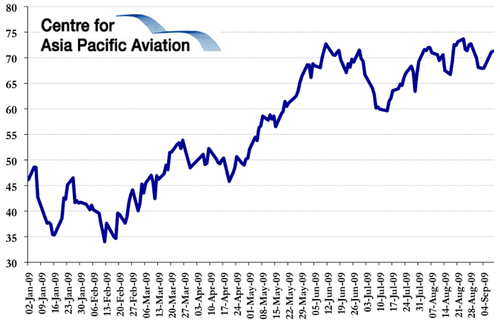 Jet fuel consumption could also be set to rise in 2010. Airbus and Bombardier came out this week with forecasts of growth returning in 2010. Airbus is particularly optimistic, forecasting up to 4.5% growth in 2010 and better than 6% in 2011. Boeing has been more conservative, forecasting a recovery in 2011.

Jet fuel prices have been more subdued than crude, with New York Harbor up 0.4%, US Gulf Coast up 0.7%, and Los Angeles prices up 1.2%. Prices were also up in Amsterdam-Rotterdam-Antwerp, gaining 1.0%, while Singapore prices declined 1.2%. 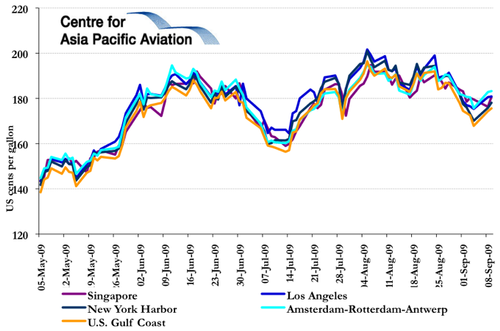