More tightness in crude supplies has seen crude oil prices jump back above USD70 per barrel this week, with reports from the US Energy Information Administration that the US national oil stockpile diminished by more than 1 million barrels last week. Analysts were reportedly expecting the opposite: an increase in supplies of 1.9 million barrels.

Continued optimism about an economic recovery has pushed commodity prices and equity markets higher. Oil prices have jumped enough for some carriers, particularly LCCs in Europe, to consider increasing their fuel hedge positions for next year (and beyond).

Europe’s largest LCC, Ryanair, announced this week that it has already hedged 50% of its fuel requirements for 1Q2011. Ryanair expects to save EUR460 million on its fuel bill in the current financial year, having hedged 90% of its oil costs at USD62 per barrel for the fourth quarter (to 31-Mar-2010).

As fuel prices tumbled through late 2008 and early 2009, carriers relinquished many of their fuel surcharges, with some airlines foregoing them altogether, which is reflected in sharply lower yields this year.

British Airways noted this week that its yields remain under pressure due to a combination of “lower fuel surcharges, exchange movements and [passenger] mix” - ie fewer premium passengers. Norwegian Air Shuttle’s yields were down 5% in Sep-2009, after surging 10% in Sep-2008, thanks to the application of higher fuel surcharges last year.

Oil back at USD70

For the week to 06-Oct-2009, the underlying crude oil price rose 6.2% to USD70.71 per barrel, recovering lost ground after dropping well below USD70 per barrel last week. Crude has been hovering around the USD70 per barrel level for the past five months. 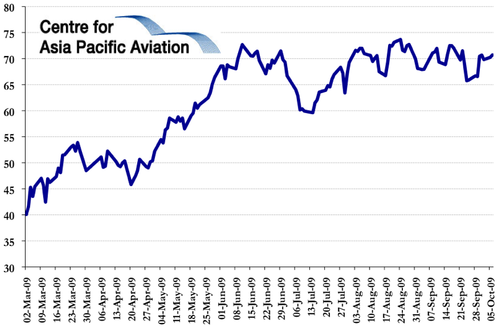 Jet fuel prices had a commensurate rise. New York Harbour and US Gulf Cost prices rose 7.2% and 6.4% respectively in the week to 06-Oct-2009, while Los Angeles prices increased 3.9%. Amsterdam-Rotterdam-Antwerp exchange prices rose 4.7% while Singapore prices rose 2.7%. Prices recovered by better than USD11 cents per barrel in most markets. 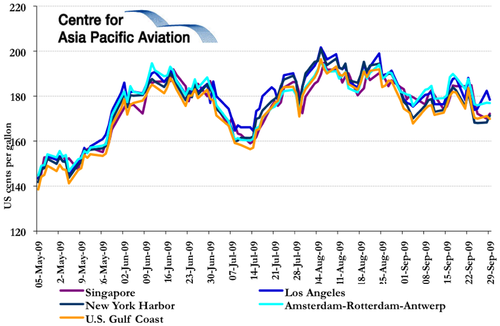