North and South American shares were mixed on Tuesday (06-Apr-2010) following the lead of the wider US market. The Dow was flat, with the banking sector being one of few to rise on news the US Federal Reserve stated it still plans to maintain its record low interest rate to safeguard the country’s economic recovery. However, gains in some airline stocks were weakened by a 0.3% rise in oil prices, to USD86.84.

If Southwest Airlines' (+2.2%) codeshare deal with WestJet (-0.2%) does, indeed, fall through (as seems to be the case now that the Canadian carrier is working the Delta Air Lines (+1.7%)), Southwest reiterated its intention to enter the Canadian market on its own.

WestJet is in a slot swap deal with Delta over LaGuardia and WestJet has been signaling that Southwest is not ready for the codeshare between the two carriers. Consequently, WestJet may cut a deal with Delta.

"If a partnership with WestJet were to unravel, then we would take a step back and reevaluate whether a partnership is more appropriate or serving Canada directly ourselves would be more appropriate," Bob Jordan, Executive Vice President of Strategy and Planning, told Reuters. "The codeshare is a lower risk way to enter those markets. We never said the partnerships with Volaris or WestJet took serving those countries ourselves off the map."

It would, however, mean a tremendous investment for the Dallas-based carrier.

The Southwest/WestJet deal, signed in 2008, calls for codesharing between the two airlines, but it was put on hold last May owing to the recession, delaying the Nov-2010 implementation date. In Feb-2010, WestJet cited its conversion to SabreSonic for the delay into 2011. Then, WestJet said the problem was actually with Southwest’s “readiness.” Meanwhile, Southwest last week said the deal was on track and it was caught up short when it learned of WestJet’s possible defection to Delta in the press.

Southwest is also working on a similar deal with Mexican airline Volaris. The only other option would be Air Canada, a Star Alliance member or Jazz, which is seeking to diversify and has just cut a charter deal with Thomas Cook.

While Republic Airways Holdings (+1.4%) is likely to garner most of the attention next week as it unveils the successor brand to both Midwest and Frontier, AirTran (+1.6%) took this week to steal a little thunder by opening its new Milwaukee crew bases, which will eventually become home to more than 300 crew members.

The base officially opened yesterday, which will include 50 B737 pilots and 50 flight attendants, as part of the airline’s expansion at General Mitchell International Airport. It sees Milwaukee as a “key strategic location in the Midwest for the airline.”

"Opening these crew bases is the next natural step of our expansion in Milwaukee," said Bob Fornaro, Chair, President and CEO of AirTran Airways. "We are extremely proud of the fact that we have been able to keep every single promise we've made to this community, including this one. We look forward to many more years of promises kept."

AirTran Airways has steadily expanded its operations at General Mitchell International Airport since first coming to the city in 2002. In addition to the pilot and flight attendant bases opening today, the airline also operates a line maintenance station at the airport.

Trying to edge out Midwest Airlines as the city’s home town airline, AirTran has also been extremely active in the community, supporting dozens of charities, including the Hunger Task Force, Milwaukee Circus Parade, YMCA of Metropolitan Milwaukee and the Wisconsin State Fair.

America Airline Daily reports the latest news from the airline industry in North America, the Caribbean and Latin America. Other stories featured in today’s issue include: 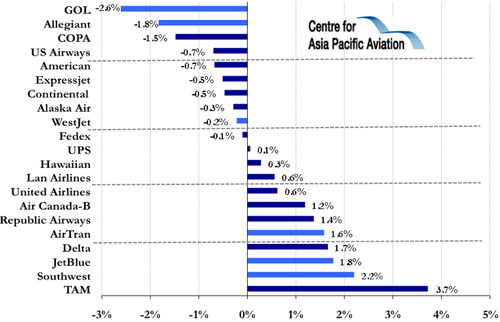