Oct-2009 traffic results at the three major European airports - London Heathrow, Paris Charles De Gaulle and Frankfurt International – indicate signs of a gradual stabilisation in passenger traffic. However, a sustainable recovery is not yet guaranteed, with conditions remaining tough.

Oct-2009 traffic at the key European hubs remained in negative territory, with the exception of London Heathrow, which continues to perform better than the others, with passenger traffic up 1% year-on-year. Paris CDG, meanwhile, dropped 1.9% to 5.1 million passengers, while Frankfurt was also down by 1.9% to 5.6 million passengers. 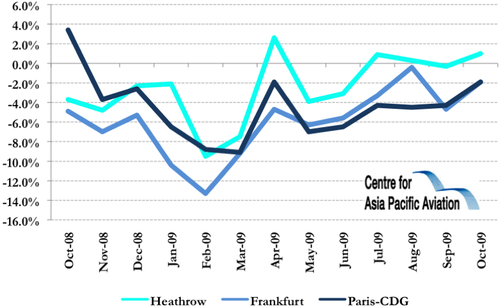 Between them, London Heathrow, Paris Charles De Gaulle and Frankfurt International airports handled more than 15 million passengers in the month. However, passenger traffic at the three airports is still below 2007 levels, indicating a full-year contraction from approximately 180 million passenger in 2008 is on the cards. 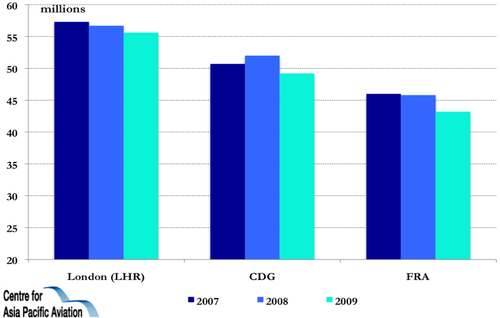 “Decline in traffic is increasingly lessening”; growth expected in late 2009 or early 2010: Fraport

According to Fraport Executive Board Chairman, Dr Stefan Schulte, traffic in Oct-2009 “continued the positive trend in traffic development that we have seen during the course of the year”. He added, “Oct-2009 figures indicated that the decline in traffic is increasingly lessening”.

Dr Schulte separately stated that Frankfurt’s passenger and freight figures are “clearly recovering”, with Fraport expecting passenger traffic to “increase again by the end of this year or the beginning of next year, at the latest”.

Mr Schulte added that one of factors contributing to this improvement is intercontinental traffic, which recorded “particularly” strong growth on the Asia and Central Africa routes.

Frankfurt sees freight growth for the first time since Jun-2008

Meanwhile, Frankfurt’s airfreight tonnage improved even more noticeably in Oct-2009, with the airport seeing, for the first time since Jun-2008, freight growth in the month, of 0.7%. The major growth drivers included European traffic (up 18%) as well as Frankfurt Airport's important North America market (up slightly by 1.1%).

The Fraport Group's majority-owned airports also progressed overall, with the six airports (Lima, Antalya, Burgas, Varna and Frankfurt) welcoming approximately 7.5 million passengers in the month, a slight 0.1% year-on-year reduction.  In particular, Lima Airport and Antalya Airport– where Fraport is now operating both international terminals as well as the domestic terminal – provided positive stimulus to the total traffic results, with passenger growth of 6.8% and 2.7%, respectively. 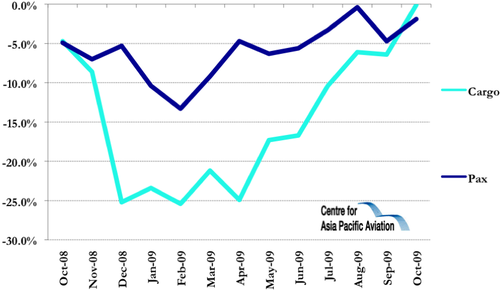 Combined traffic among BAA’s seven UK airports saw a 1.4% reduction in total passengers to 12.3 million passengers in the month.

Despite remaining a year-on-year decline, this was the best performance since Jun-2008, with the company adding that there were “some encouraging indicators of improvement in terms of passenger traffic at Heathrow, Gatwick and Edinburgh; a strong upturn in airline load factors and a recovery in cargo traffic”.

BAA CEO, Colin Matthews, added, “this year has been one of the most challenging on record for the aviation industry, and the outlook remains difficult. Nevertheless, the figures across the group appear to be improving”. 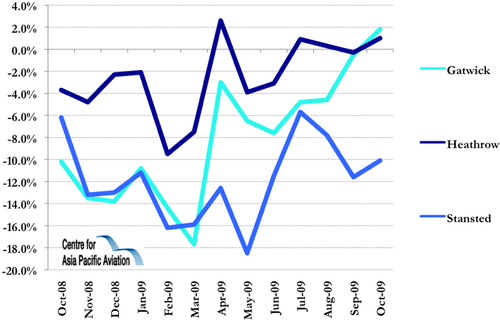 Heathrow Airport handled 5.7 million passengers in Oct-2009, a 1.0% year-on-year improvement, prompting Mr Matthews to state that “Heathrow’s traffic figures were particularly encouraging and come as a result of the airport being the hub of a strong international long-haul route network.” On a year-to-date basis, Heathrow traffic was down 2.2% to 65.8 million passengers.

In further positive news, London Gatwick (+1.8% to 2.8 million passengers) achieved a monthly increase for the first time since May-2008.

London Stansted was the only London airport experiencing a passenger reduction in the month, down 10.1% to 1.8 million, largely due to airline capacity reductions (airlines at Stansted have cut the number of seats offered by 11.7% compared to Oct-2008 levels).

In Scotland, Edinburgh continued its recent run of improvement with a 3.8% gain in Oct-2009, for seven consecutive months of growth, on the back of the introduction of new low cost routes to Europe. Edinburgh was the only Scottish Airport to experience passenger growth in the month, as had been the case in the preceding month.

Glasgow, meanwhile, recorded a 9.2% reduction, with Aberdeen passenger number down 8.3% and Southampton’s figures falling by 6.4%, for a total reduction in BAA Scottish passenger numbers of 3.5%.

Cargo tonnage at BAA’s airports “improved sharply” on recent results to record the first monthly increase (up 1.5%) since Aug-2008. This figure was boosted by strong cargo growth in Scotland (+89.4%), driven by a 191% increase at Edinburgh. London area cargo, however, remained weak, particularly at London Gatwick (-8.0%), up by only 0.7%. 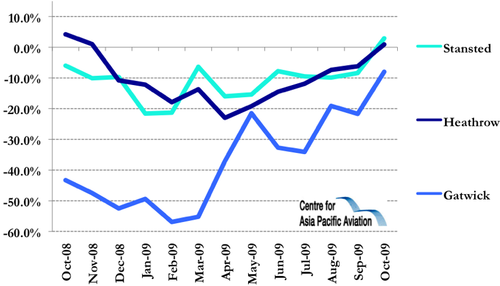 Among the smaller European hub airports that have reported Oct-2009 to date, it appears that, in most cases (with the exception of Zurich and Berlin Tegel) that the decline in passenger traffic has continued, although the decline appears to be lessening.  Of the selected European airports, only Manchester reported a double-digit contraction in passenger numbers in the month.