In 2007-2008 the airlines most feared the rising cost of fuel and, especially in the US, used the expense to dramatically cut service, scale back operations, retire aircraft and reduce capacity. But the positive effects of those actions were almost immediately negated by the recession, which brought a whole new set of problems.

By 2010, the global balance sheet was generally in the black again, yet as 2011 stumbles into its second month, already high fuel costs are escalating on an avalanche of fears, uncertainties and unrest.

Once again, the talk of fuel surcharges and price hikes is rife in the marketplace. In the US, fares have seen steady increases over the past two quarters and are likely to continue. And, as the graph shows, these concerns are well founded.

Airlines are already reacting to the new reality. The Atlanta Constitution reported on 3-Feb-2011: “Just two weeks after announcing plans for growth this year, Delta Air Lines is trimming the forecast and joining other carriers in raising fares to offset higher fuel costs. Delta's No2 executive, Ed Bastian, told analysts Thursday that Atlanta's biggest carrier, along with others, has boosted fares four times in the past 45 days.” 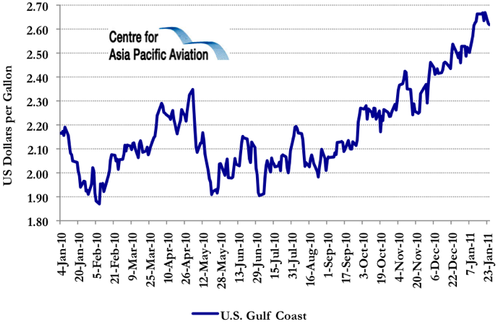 In the US domestic market rather than add a “surcharge”, airlines often just tack a fare increase onto each one-way segment. As a result, shorter segments have a greater increase per mile as the $5.00 increase applies equally to LAX-SFO and LAX-JFK. Furthermore, the carriers generally act in concert, with all applying the same increase simultaneously.

In the international marketplace, the picture is far less clear. Even the US carriers operate differently in such markets. JetBlue raised its domestic fares roughly 4% to counteract a 16-17% increase in fuel expenditure. But for flights to offshore destinations, it has implemented flat rate surcharges, USD35 for Puerto Rico and USD45 for other Caribbean points.

Carriers in other regions are imposing similar increases. Qantas will increase its surcharges from 19-Feb-2011, upping the amount from AUD85 to AUD115 on trips to the US, with similar increases applied across other markets as well.

From February 1, Air France announced that it substantively increased its charges. On long-haul flights the surcharge will rise from EUR10 to EUR96, and to EUR106 for flights exceeding seven hours.

IATA’s head, Giovanni Bisignani, noted that fuel currently accounts for about 27% of IATA carrier costs but with oil moving towards USD100 a barrel, the rise could “spoil the party” and deal a severe blow to the recovery that has been underway fro the past year.

Finding the total cost is more complex than finding a fare

For consumers, many still very price sensitive, the fare increases come as very unwelcome news. While perhaps justified by economic reality, the imposition of surcharges is far from transparent. Some carriers advertise very appealing “fares”, noting that taxes, fees and surcharges are not included. However, when the final amount is revealed, the bargain is difficult to find.

Searching various websites for non-stop travel on the same set of days gives widely differing degrees of fare transparency. Some have obvious and stated fuel surcharges while others add amounts that are more generic, one carrier noting the amount to be "all carrier fees and surcharges".

To make things even more interesting for consumers, even the same flights are displayed with different calculations, depending on which carrier’s site is consulted. The chart that follows shows the fare breakdowns as displayed for a round-trip journey from San Francisco to Frankfurt in March. United’s and Lufthansa’s sites displayed both their own-operated service and those flown as a partner codeshare.

The passenger pays an equal amount (.02 difference, probably exchange) irrespective of the carrier with which it is booked. However, the calculations of that total are quite disparate.

The “fare” on Lufthansa’s site is quite a steal considering the distance involved. However, the shock comes on the booking page when “taxes and surcharges” are almost double the base fare, with USD360 being designated as fuel.

United’s fare is quite a bit higher and the site does not provide any explanation of the components of the amount. However, if we subtract the USD360 LH fuel charge from United’s “fare” we get a remainder of USD355.60 which corresponds to none of the LH numbers. There is also a difference in the taxes collected, which corresponds to the “fare” difference minus the fuel surcharge.

Lufthansa delineates the taxes by type but United only give an explanation of the categories of taxes so the difference is not discernable online. While passengers are offered the same price, to say that the methodology employed by the two airlines is confusing would be an understatement. The exercise also provides insights as to why comparisons of global cost and revenue statistics are so difficult.

The next chart displays a selection of nonstop fares from the US to an assortment of destinations on the same dates. The variety of transparency is stunning and makes direct comparisons very difficult, but there are some things to be gleaned from the results.

The battle between American Airlines and the GDS suppliers has focused attention on issues of transparency and the inability of consumers to identify fares, charges and other components. While that discussion is primarily centered on the US market, it is equally clear that there is often little information available as to just how international fares are concocted.

If carriers continue to experience rising fuel prices, the need to increase fares will not be far behind. While competition will hold any attempt at outrageous increases in check, the ability of ordinary consumers to understand the pricing system may be further compromised.

The industry is once again faced with a conundrum in that it must cover its costs and still attract customers with higher fares. Doing that in a reasonable and forthright manner, easily understood by potential travelers, will be challenging.