Norwegian was the strongest LCC gainer and among the biggest advancers on the Oslo Stock Exchange, adding 10% to close at NOK114, its highest level since late Jun-2010. The LCC and TUI Travel yesterday agreed to widen the scope of an agreement for charter travel in summer 2011. Norwegian will operate 800 extra services with a contract value of NOK320 million (USD54 million).

The airline was bullish on the outlook for 2011, announcing plans to increase capacity across its Manchester, Newcastle and Glasgow bases and add staff.

Virgin Blue (+3.5%) was another gainer after announcing it secured a three-year AUD6 million (USD6 million) p/a contract from the AFL, a major Australian football league. Rival Qantas has had the contract for seven seasons. Virgin CEO John Borgehtti said the airline "had scored a goal in winning the contract".

airberlin CEO Joachim Hunold yesterday expressed caution for the coming year, despite the improving economic conditions. Hunold stated the German air travel tax is prompting the airline to cut summer 2011 capacity by 5%, and warned that ‘fierce competition on several routes will make it impossible to pass on the air travel tax to the passengers in its entirety’. Despite upbeat European sentiment and the DAX reaching a closing high for 2010, Air Berlin fell 1.5%. 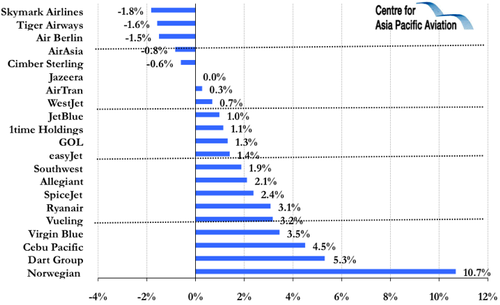