Norwegian Air’s exodus not a body blow to Oakland Airport

Norwegian SVP commercial Matthew Wood has reported that the consolidation "will better position us for our return to profitability". Norwegian's twice weekly San Francisco-Oslo service will launch on 30-Mar-2020 and three times weekly San Francisco-Rome service will begin on 01-Apr-2020 for its summer schedule. The carrier relocated all London, Barcelona and Paris services from Oakland to San Francisco earlier in 2019.

What does all this mean for Oakland Airport, for other U.S. airports specialising in ‘low cost’, for Norwegian itself and the very concept of long haul low cost travel?

Oakland the most ‘low cost’ airport of significance in California

Oakland has established itself as the ‘low cost’ airport for the Bay region, alongside San Francisco International and San José airports, in a way that has not quite been mirrored in the Los Angeles region to the south, despite the efforts of Ontario International since it broke away from Los Angeles World Airports. Long Beach Airport also has a healthy low cost share but that airport stopped growing for environmental reasons several years ago, and its passenger traffic so far in 2019 has declined by more than 10%.

Despite the loss of Norwegian services, the low cost feature is still the case generally at Oakland compared to many peer airports, as the table below, of some of the most densely populated U.S. conurbations and their airports’ capacity ratios by business model, shows (week commencing 16-Dec-2019).

Chicago has a greater (U)LCC presence, but not so in New York

In the Chicago area there is a different story. Midway Airport, closer to downtown than O’Hare though capacity constrained by its built-up surroundings, has a greater LCC seat share even than Oakland, courtesy of the presence of Southwest, which alone has 93% of capacity there, while the small Rockford Airport, which is more oriented towards cargo operations, has 100% (U)LCC capacity, all of it on Allegiant.

In New York only Stewart International, out in the boondocks 60 miles north of Manhattan, has more than 50% of its capacity on LCCs. Coincidentally it is another airport that has been adversely affected by the withdrawal (completely) of Norwegian international services for a variety of reasons, leaving it dependent on an unholy alliance of full service and low cost domestic services.

It could be argued that Stewart airport lost its raison d’être by way of the Norwegian withdrawal because the Port Authority was hoping that carrier would kick-start and sustain a revival for the airport. Instead, its passenger traffic, which grew by 63% in 2017 and 54% in 2018, has plummeted by 15.4% in the first nine months of 2019.

Could the withdrawal have a similar effect at Oakland?

Passenger traffic at Oakland has already fallen, but while Southwest is in situ the impact is minimal.

Not as dramatic a fall as at Stewart, but still of concern as the withdrawals by Norwegian make their impact. It was only in Oct-2019 that Norwegian was promoting a 50% increase in Oakland–Oslo capacity for the 2020 summer season.

However, Norwegian’s share of Oakland’s overall capacity was small, and as long as Southwest retains its commitment to that airport it will not be adversely affected to a serious degree. Right now Southwest has a seat capacity share of almost 79%; its nearest ‘challenger’ is Alaska Airlines on 5.2% share.

There is no indication that Southwest is likely to abandon Oakland, which is its Bay Area operating base, for San Francisco, where it has just over 6% of capacity. 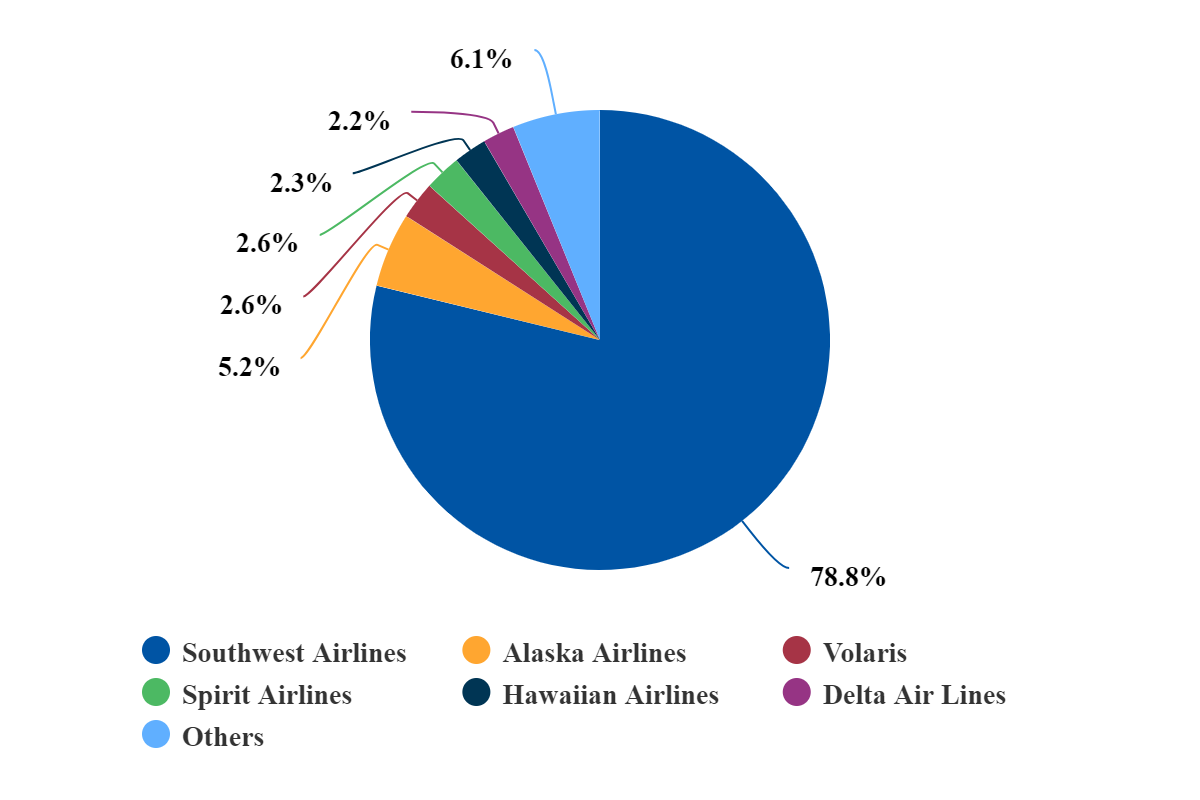 What it does indicate, as in the case of Stewart International, is that the era of ‘long haul low cost’ is shifting in emphasis from secondary level airports at one or both ends of the route to operations between primary airports.

On the east coast Norwegian has axed services involving airports such as Hartford, Connecticut, and Providence, Rhode Island, and on the other side of the Atlantic its services from Cork in Ireland, in favour of primary airports. (And its Argentinean operation was sold to JetSMART at the beginning of Dec-2019 following the election of a new President there).

Preferential charges do not appear to be a factor

That will inevitably impact on charges and fares. One must assume that the level of airline charges at Oakland was not a determining factor in this decision. Unless a comprehensive and lengthy deal was done, say, for the first three years.

As the chart below shows, across a broad range of aircraft types the charges at San Francisco are in fact more than double – in one case more than triple – those at Oakland. 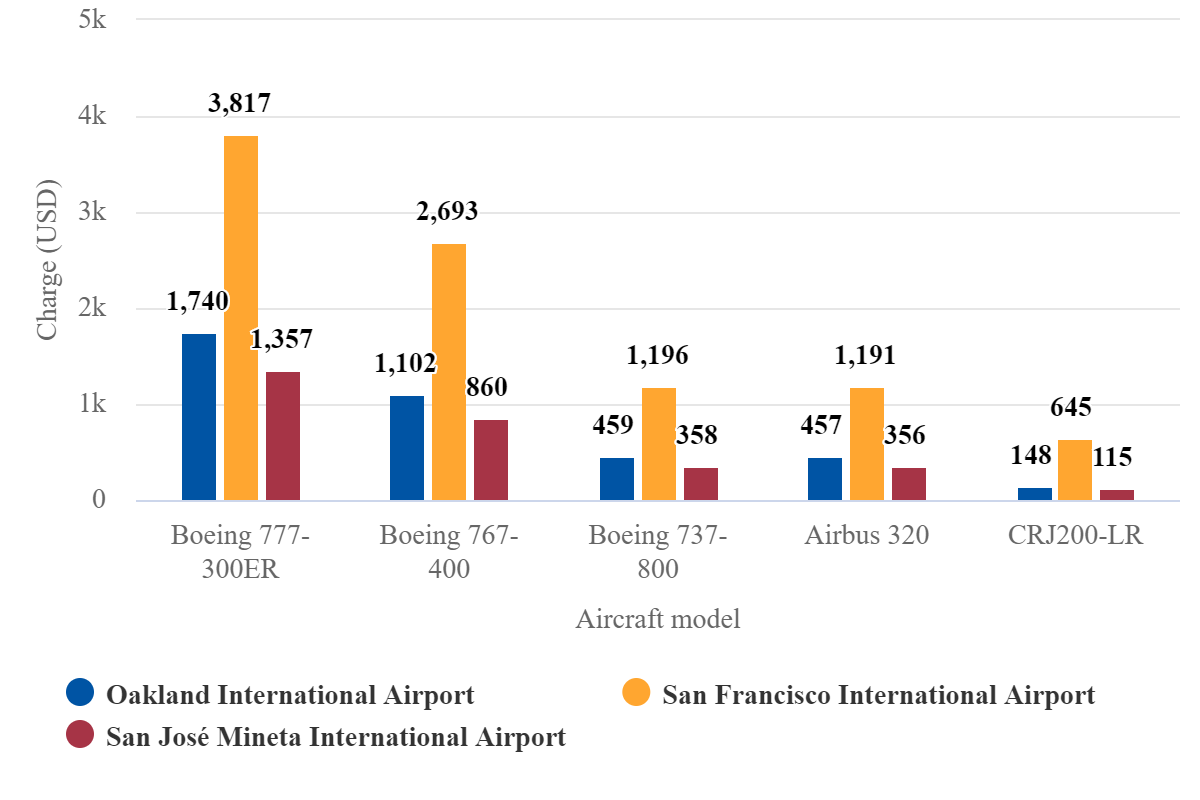 Indeed, Norwegian might have been advised to consider San José’s Norman Y Mineta airport instead, where charges are lower still, and again across the board, and where there presumably would be more demand from ‘Silicon Valley’-based companies for flights to I.T.-savvy Scandinavia.

One factor in the withdrawal might be the fact that there are no improvements scheduled at Oakland; the last, mainly remedial, work was completed in 2017, whereas San Francisco has a huge USD7.3 billion capital improvement programme running well into the 2020s.

But on the whole, Norwegian’s decision will not be ‘terminal’ for Oakland.

It does pose questions though for other secondary level low cost airports such as Ontario International, hoping to attract and/or sustain low cost long haul services.