Norwegian Air Shuttle slumped to an operating loss in 2Q2013, after having previously established 2Q as a profitable quarter. This followed a record loss in 1Q2014. It will need to do a lot of making up to achieve a profit for the full year. Norwegian said it suffered from one-off costs related to the delay in Dreamliner deliveries and its first ever strike, in addition to negative currency movements. Nevertheless, while its CASK target for 2014 has slipped a little, it has a strong cost focus and remains broadly on course to achieve its medium term unit cost goal.

As in 1Q, the real problem was that unit revenue, RASK, fell more rapidly than CASK. This was the result of strong capacity growth in Norwegian's intra-Europe markets, its new bases in London, Barcelona and Madrid and its new long-haul routes. It has modestly trimmed its 2014 capacity growth plans, but it still has a very large number of aircraft on order until 2022.

It has established an Irish leasing vehicle through which it plans to lease out any excess aircraft, perhaps mindful of the fact that aircraft lessors are typically more profitable than aircraft operators. Meanwhile, 2014 looks set to deliver a poor result.

In 2Q2014, Norwegian Air Shuttle's net result fell by 35% year on year to NOK128 million (EUR16 million). Although lower than in the same period last year, the net result was flattered by currency translation gains and, in particular, by a positive NOK265 million contribution from income taxes (compared with a negative NOK80 million in 2Q2013).

Norwegian's 1Q2014 result saw a record first quarter loss. The first quarter is seasonally weak and typically produces losses, which were exacerbated this year by long-haul start up costs.

The second quarter, however, is typically profitable and the 2Q2014 loss is Norwegian's first 2Q loss since 2010. Adjusting EBIT for the item 'other losses and gains', which are mainly non-cash currency-related movements, the underlying operating result fell from a profit of NOK267 million in 2Q2013 to a loss of NOK113 million (EUR14 million) in 2Q2014.

Norwegian increased its ASK capacity by 41% in 2Q2014, with RPKs growing by 46% and load factor gaining 3ppts to reach 80%. This is its highest ever 2Q load factor, but it remains short of the levels achieved by other major European LCCs.

A significant factor in the growth of ASKs was the development of Norwegian's long-haul network: the average sector length grew by 18% year on year. Passenger numbers increased by 16%. 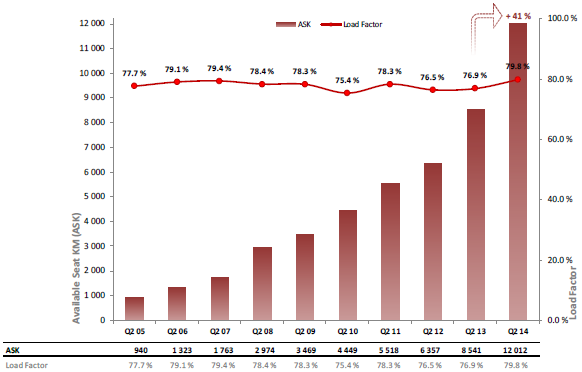 Revenue growth of 26% year on year was faster than passenger growth of 16%, reflecting the increase in Norwegian's long-haul network, but slower than the 41% growth in ASKs in 2Q2014.

Ancillary revenues grew at the higher rate of 60%, with ancillary revenue per passenger up 38%, mainly thanks to higher sales levels on long-haul operations.

By region, revenue growth on international routes was 37%, while domestic revenues fell by 2%. This continued the year on year drop in domestic revenues that started in 1Q2014, but which had not been experienced by Norwegian prior to that.

As in 1Q, Norwegian's 2Q statement refers to 'minor increases' in domestic capacity, so the fall in domestic revenue suggests ongoing price weakness in its own back yard.

Norwegian's 2Q results statement refers to "strong capacity growth and strong competition in leisure markets", which have created an environment of price weakness. Norwegian's new short-haul bases in Europe (London Gatwick and Spain) and its new long-haul routes contributed to its RASK weakness.

In addition, Norwegian highlights the additional capacity deployed in intra-European markets from Scandinavia by SAS, referring to the "high cost competitor with the highest capacity growth". Norwegian's network has the greatest overlap with SAS. In the long run, a high overlap with higher cost competitors should allow Norwegian to use its lower cost base to increase its market share, but its unit revenues are vulnerable in the short term to SAS capacity growth. 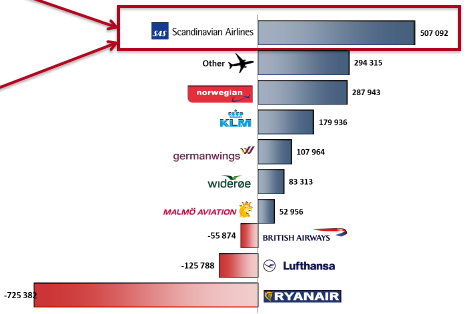 Operating costs, excluding 'other gains and losses', increased by 38% in 2Q2014. This was faster than revenue growth, but slower than the 41% growth in ASKs. Fuel costs increased by 42%, slightly faster than ASKs due to price increases, while ex fuel costs were up 36%.

The cost category that grew the least rapidly was personnel, which grew 23% in spite of a 30% increase in man-labour years. This continues the trend of labour cost productivity improvements that will be crucial to Norwegian's long term success, particularly with its long-haul operations.

Norwegian estimates that one-off costs related to industrial action amounted to NOK101 million in 2Q2014 (Norwegian's first ever strike, involving one man, took place in May-2014). In addition, it incurred "irregularity" costs of NOK101 million related to the long-haul operations, stemming from delays to Boeing 787 deliveries (primarily wet lease costs, higher fuel cost and maintenance costs). Currency movements had a negative impact of NOK130 million in the quarter.

Norwegian's 2Q CASK fell by 2% year on year and ex fuel CASK fell by 3%, according to our calculations. The company says that ex fuel costs at constant currency and excluding the one-off items fell by 7%.

While CASK reduction is to be welcomed, this rate of decline does not seem especially rapid when set against an 18% increase in average sector length and a 41% increase in ASKs. Moreover, the fall in unit costs (even after taking account of one-offs) was insufficient to offset the 11% fall in RASK.

Norwegian retains its medium term target to achieve ex fuel CASK of NOK0.25, although its 2014 target has been softened modestly (see below).

Norwegian reports that it is maintaining its financial targets for its long-haul operation.

These relate to the expected development of CASK for the long-haul operation, for which the company has a target of NOK0.35 to NOK0.30 in 2015/16. The balance of US versus Asian destinations will affect the outcome, since the US network has higher landing and handling charges. For 2014, it expects a long-haul CASK figure of NOK0.36, excluding irregularity costs, and it has added a 2015 target of NOK0.34 to NOK0.35.

See related report: Norwegian improves its 1Q2013 results, but widebody profits may be one for the long-haul

CEO Bjorn Kjos told analysts on a conference call to discuss the 2Q results that he expected to receive approval from the US Department of Transportation for Norwegian's application for a foreign carrier permit.

"If they complied with the Treaty, we would have had it a long time ago" ,he said. The practical impact of the permit would be to allow the same aircraft to operate from Europe to the US and to Asia with the same crew.

Traffic rights are not a problem: Norwegian already has US traffic rights from anywhere in Europe under its Norwegian AOC, since Norway is effectively treated as an EU nation by the US under the EU-US Open Skies agreement. However, the Norwegian AOC does not allow the same rights elsewhere in the world, other than from Norway.

Mr Kjos explained that the Irish-based subsidiary Norwegian Air International provided it with EU traffic rights to fly to Asia, Africa and South America from anywhere in Europe. 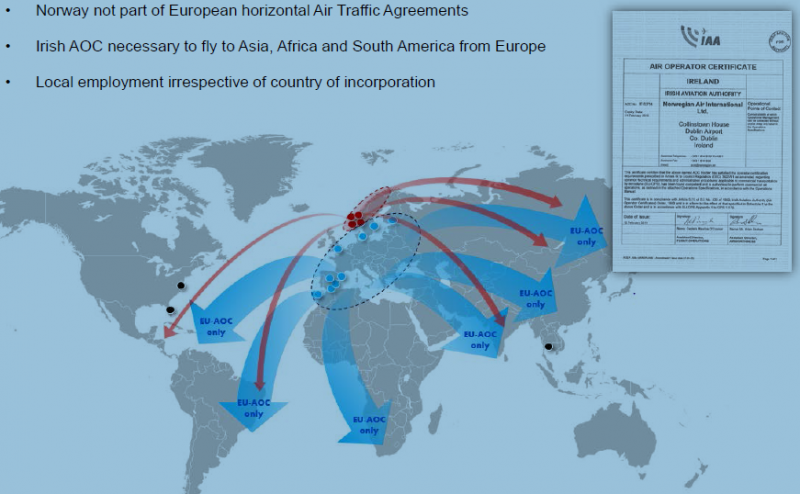 Norwegian's Irish asset management company, Arctic Aviation Assets (AAA), has been established to provide the airline with flexibility over its future capacity planning, given the number of aircraft that it could potentially own over the next decade. It has 316 aircraft either already in the fleet (95) or on firm order and 150 purchase rights. This means it could have up to 466 aircraft by 2022.

Mr Kjos told analysts on the 2Q conference call that a medium term growth rate would likely be in the region of 10% to 20%. "The priority is to have sound growth in the market. The excess capacity we will lease out".

At the mid-point of this medium term growth rate, 15%, the fleet would grow to around 270 aircraft in 2022, leaving up to 196 aircraft that could be used either for additional growth, to replace older aircraft or to be leased out externally. Growth at the lower or upper end of this range would increase or decrease the number of "surplus" aircraft by more than 60.

Mr Kjos' comment is his clearest statement that Norwegian has made to date in terms of acknowledging that it is unlikely to need all the aircraft it has on order for its own network. Nevertheless, while the aircraft leasing industry may typically be more profitable than the airline industry, it is a different business and adds to the management challenges faced by Norwegian, alongside rapid short-haul growth and the nascent long-haul business. 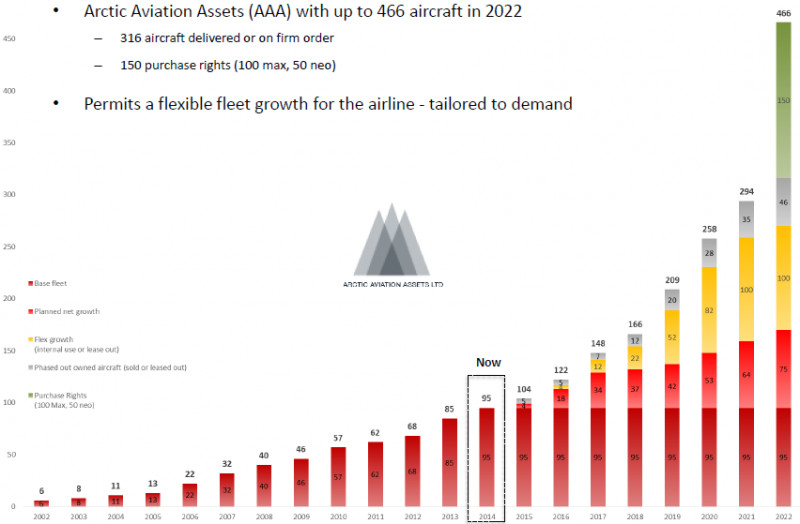 The outlook for 2014 is worsening

Norwegian has still not provided any profit guidance for 2014, but has made adjustments to two key elements of its guidance. First, it has lowered planned ASK growth from 40% to "in excess of 35%". This is still a high rate of growth, but the weak unit revenue environment demands some trimming of capacity. The lower growth rate focuses on short and medium-haul routes in 4Q.

Second, Norwegian has allowed its 2014 CASK target to slip a little. Its previous target of NOK0.40 has been revised to be in the range of NOK0.40 to NOK0.41. This reflects both the lower 4Q capacity increase and the long-haul "irregularity costs".

The previous target represented a reduction of 5% versus 2013, whereas the upper end of the new range would be a reduction of 2%, in line with that achieved in 2Q. The combination of a lower capacity plan and slightly higher unit costs leads to lower absolute operating costs in 2014.

The big unknown is unit revenues. Assuming 35% ASK growth and unit cost at the lower end of its range, Norwegian will record an operating loss (before 'other losses and gains') if 2014 RASK falls by 8% or more. If unit cost is at the upper end of its range, a RASK fall of 5% or more will lead to a negative operating result. So far this year, its RASK has fallen by 17% in 1Q and 11% in 2Q.

In our report on its 1Q results, we concluded that 2014 seemed set to produce lower profits for Norwegian compared with last year. It now seems that a full year operating loss is a distinct possibility. Certainly, the 1H loss leaves a great deal still to be achieved in 2H.