Northeast Asia's combination passenger-freight airlines are re-fleeting their main deck cargo operations. EVA Air is the latest, announcing at the Paris Air Show its intent to acquire five 777Fs. The 777F has also been used to re-fleet the cargo units affiliated mainland China's big three airlines: Air China, China Eastern and China Southern. The largest in-service 777F fleet in the world is with China Southern, with 10. Korean Air has taken 777Fs in addition to 747-8Fs, which only Cathay in Asia has been the other combination airline to use. There are no known re-fleeting plans from Asiana and China Airlines.

The airlines that have re-fleeted have been optimistic about acquisition costs being offset by operating efficiencies.

Southeast Asia has a different outlook. Thai Airways has exited the main deck freight business and Malaysia Airlines may do the same, although both were small players. Singapore Airlines Cargo is the largest in Southeast Asia but with only eight in-service 747Fs and no plans to re-fleet. As with the passenger business, Southeast Asian carriers are disadvantaged in serving North America, the main freight route for Northeast Asian carriers. To Europe there is large competition, including from Gulf carriers.

EVA is the latest airline in Northeast Asia to re-fleet

At the 2015 Paris Air Show, EVA Air announced its intent to acquire five 777Fs, after years of saying it may do so. The 777Fs will join EVA's passenger 777s (20 in service and 12 on order, all -300ERs). Taiwanese peer China Airlines has not re-fleeted, and nor has Asiana. Mainland China's three big cargo carriers have re-fleeted, as have Korean Air and Cathay Pacific. ANA's freighter network is confined to intra-Asia, where it uses 767s.

EVA's 777F acquisition will give it a new medium-size freighter option after recently phasing out its remaining MD-11Fs. EVA’s all cargo fleet currently consist of eight 747-400F, including three production freighters and five converted freighters. This represents a significant reduction compared to the fleet of 18 freighters, including nine 747-400Fs and nine MD-11s, from a few years ago. EVA expects to maintain a 747F fleet of between five and eight aircraft. It so far sees freight performing better in 2015 than 2014.

EVA has always relied heavily on air cargo, which prior to the downturn accounted for nearly half of its overall business. While EVA has shrunk its freighter fleet and network in recent years this has been partially offset by more belly capacity, particularly in the North American market as its 777-300ER passenger fleet has expanded.

Belly cargo is expected to be an important contributor in Houston, which is a large cargo market with demand particularly from the energy industry for oil piping and tubing. The belly capacity available to Houston will supplement Dallas, where EVA currently operates freighter services but is not interested in adding passenger services as it is a oneworld rather than Star hub.

Singapore Airlines Cargo has a freighter fleet of 10 aircraft, all -400Fs although only eight are in service with the remaining two in storage. As of May-2015 SIA expects to keep its freighter fleet at eight aircraft this year as it sees a surplus in capacity and uncertain economic signs. SIA does not plan to re-fleet its 747-400s as it does not believe fuel savings from new aircraft will offset acquisition costs. SIA's 747 freighters have an average age of 12.8 years, according to CAPA's Fleet Database.

As in the passenger business, Southeast Asian carriers are limited with how extensively they can serve North America, the key freight market for their Northeast Asian airline counterparts. SIA now worries of a slowdown despite good performance at the start of 2015 due to West Coast port closures. "Once upon a time we saw USA as an engine of growth. But there's some tentative signs as well of slowdown," EVP HR and operations Ng Chin Hwee said.

SIA's cargo volume has generally held at the post-GFC 1.1m tonne mark while AFTKs in 2014 reached a new low of 9,989m, the first time in recent history they have dipped below 10,000m. 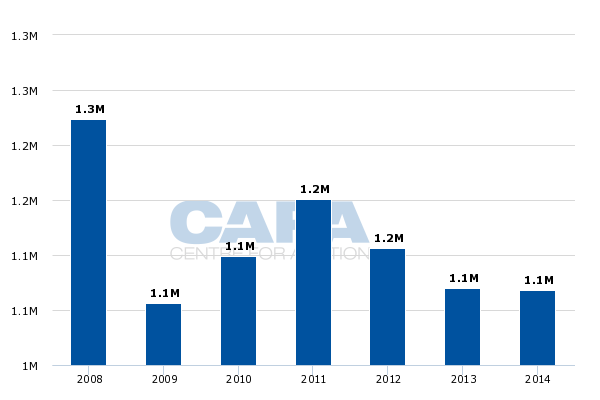 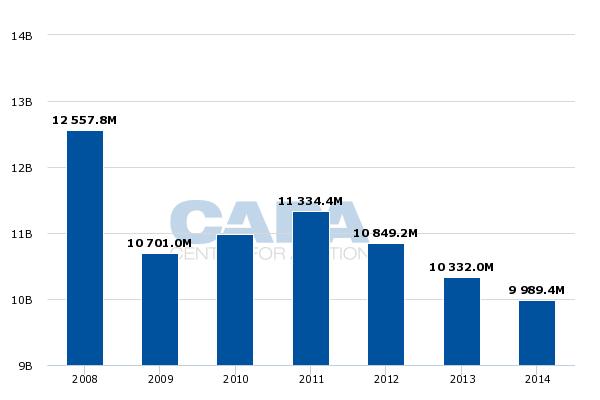 Thai Airways in Mar-2015 ended main deck freighter operations as it withdrew its fleet of only two freighters, both converted 747s with an average age of 25 years. Since withdrawing the freighters, Thai's AFTKs have dropped to their lowest level in over a decade. This is also the result of reduced long-haul flying. 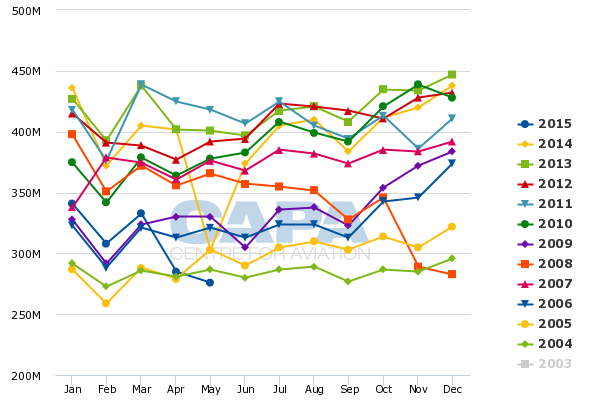 Malaysia Airlines described as speculative a report it was seeking buyers for its main deck freighter fleet of six aircraft: four A330Fs and two 747-400Fs. This was in addition to seeking offers for its A380s and 777-200ERs. 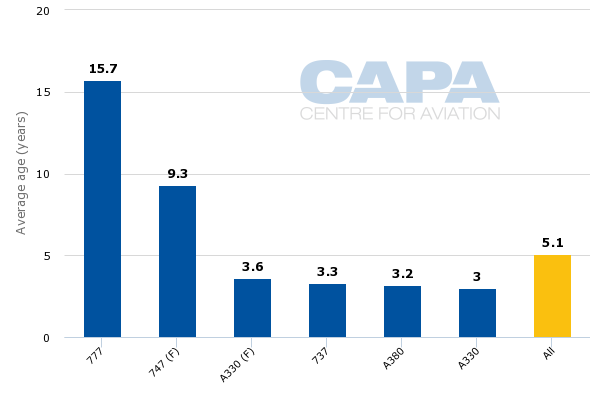 One of the biggest potential developments in Asian freight may become a non-event. On 24-Jun-2015 it was reported CAAC deputy director Zhou Laizhen said the regulator planned to merge the freight divisions of China's three biggest carriers: Air China, China Eastern and China Southern. The report was from official news agency Xinhua. Yet the CAAC later said the remarks were not made, while the airlines involved said they had no knowledge of the plans.

The Xinhua report was interpreted to say there would be a merger, but the original report said the plan was not finalised: "Currently, this work (the merger) is being actively pushed." An alternative scenario is that this idea falls under the jurisdiction not of the CAAC but the government body that oversees the airlines, the State-owned Assets Supervision and Administration Commission.

At a theoretical or operational level, merging the cargo operations would be a difficult plan. The three carriers are competitors and the cargo divisions have complex ownerships: Cathay holds a stake in Air China Cargo while COSCO has a stake in China Eastern's China Cargo.

For these combination carriers, freight is carried on both passenger and main deck freighter aircraft. Separating the main deck freighter uplift would be exceptionally difficult. However, the fact that the suggestion is circulating would suggest that those in authority see a need for rationalisation of some kind.

The interchangeability reflects the larger Asian air freight sector as airlines weigh if their passenger cargo business will be negatively impacted by decreased main deck freighter operations. And if main deck freight is to remain, there is then the question of re-fleeting.