In Denmark, Copenhagen Airport was partially privatised two decades ago, but there has been little interest in airport privatisation in Nordic countries (Denmark, Sweden, Norway, Finland and Iceland).

A reason is that four of those countries have one major airport (or a handful) and a lot of isolated regional ones, which in the worst-case scenario could be asset-stripped and closed down by a private owner, leaving inhabitants isolated.

Out of the blue the Swedish government has published a report which seems to indicate it is gravitating towards a partial privatisation solution for Stockholm’s Arlanda Airport – and possibly two others – to meet the challenge of infrastructure needs brought about by closure of other airports.

Investors would be attracted to Arlanda, and probably also Gothenburg and Malmö airports. For their part, though, the caveat would be ensuring certainty about Sweden’s developing environmental policy.

Swedish government report suggests a role for partial privatisation of one, or more, of Swedavia’s airports

A report commissioned by the Swedish government has suggested “partial” privatisation of Swedavia, the state-owned company that owns and operates Stockholm’s Arlanda and Bromma airports and eight other airports.

The report suggests that the airports in Gothenburg (Landvetter) and Malmö – the second and third cities respectively by population – in addition to Stockholm Arlanda might be good candidates for privatisation.

Arlanda is favoured initially, and probably by way of long term lease/concession rather than outright sale. Those mechanisms have both been used frequently throughout Europe. 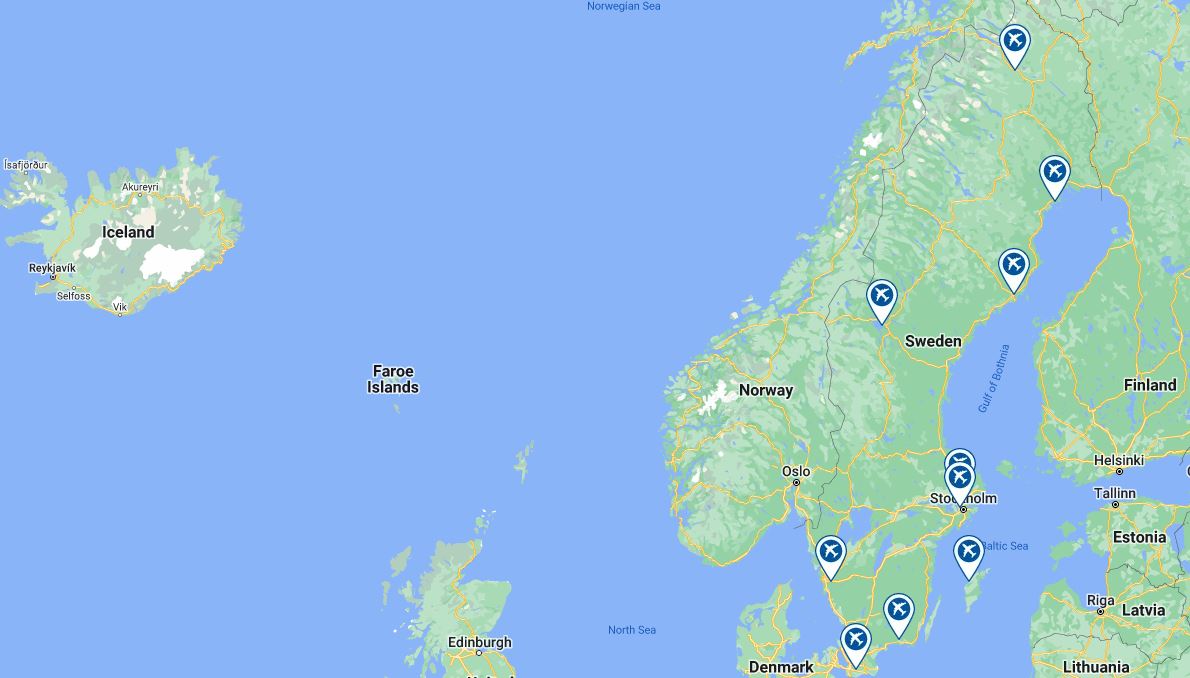 Swedavia’s year-end report for 2021 foresaw “good potential for a continued recovery in the aviation market in the year ahead.”

After a tough 2020 and a weak start to 2021, Swedavia experienced a far more positive trend during the second half of the year 2021. Along with a steady increase in passengers a number of its airline customers also made major investments at the airports, but it was insufficient to prevent a loss, for only the second time in its history.

For the full year, the number of passengers at Swedavia’s airports totalled 12 million. That was an increase of two million passengers compared to 2020 (+16%), but 70% lower compared to pre-pandemic passenger levels in 2019. Nonetheless, the year ended with a strong recovery in air travel, and in Dec-2021 passenger volume was approximately 55% of the 2019 level.

The positive trend has improved further in 2022 to date (1H2022), with a growth level of +365% in passenger traffic across the Swedavia network.

Seat capacity for the full 10-airport network is not available, but particular capacity data for Arlanda, Gothenburg and Malmö shows that in the week commencing 01-Aug-2022 they are operating at 82%; 75%; and 81% respectively of their 2019 levels.

In no case, though, is there any suggestion that they will exceed 2019 levels this year.

Financially, Swedavia’s net revenue during the fourth quarter of 2021 more than doubled compared to the same period in 2020, to SEK984 million, mainly due to the increase in air travel. Operating profit also improved considerably, to SEK -266 million (compared to SEK -875 million). Cash flow from operating activities was positive for the second straight quarter.

For the full year, net revenue totalled SEK 2,717 million (cf. SEK 2,494 million) and operating profit was SEK -1,385 million (cf. SEK -1,593 million). Profit before tax was SEK -1,441 million. Since 2020 Swedavia says it has succeeded in reducing the company’s fixed costs by about one billion kronor on an annual basis, which also contributed to the positive earnings trend.

So, as with passenger traffic, which is well up (but not so much cargo volume, where growth remains in low single digits), the financial position for Swedavia has improved to the point where operating profit should again become the norm (assuming there are no further setbacks), even if the amounts are small, and net profit is again within sight at least.

Swedavia has had to deal with difficulties in hiring staff and scaling up capacity to handle the increase in travel that it expects, in common with other operators, but it remains adamant that its airports “are well-equipped" to serve its passengers.

The world’s most sustainable country

As CAPA has frequently observed, Sweden, the most sustainable country in the world with the highest renewable energy usage and lowest carbon emissions, has the most advanced approach to dealing with the environmental aspects of aviation. Continuing to develop its airports for sustainable travel in the future and working to facilitate the aviation industry’s climate transition is at the top of its agenda.

The mantra is that “they are Sweden’s most important transport hubs and will also continue to be the world’s most climate-smart airports”.

Throughout the COVID-19 pandemic Swedavia continued to prioritise its climate transition work. The year 2021 was the first year that all 10 of the company’s airports had net zero emissions from their own operations, which makes Swedavia a world leader among airport operators in this respect. Swedavia is the first operator globally to have already reached ‘net zero’.

Further confirmation of this came in Oct-2021, when Stockholm Arlanda Airport was honoured with Airports Council International (ACI) Europe’s Eco-Innovation Award for the transition work that Swedavia had carried out.

Continuing the climate transition will be crucial, and Swedavia says it will focus to an even greater extent on contributing to the transition of the entire industry.

Such environmentally focused action is always attractive to private sector investors in airports but there is a downside, and it was highlighted in Swedavia increases passengers and revenues in 1Q2022 but losses still heavy and new threats emerge, a previous CAPA report from May-2022.

The downside is: higher aviation taxes

The downside is Sweden’s aviation taxes, which aren’t the highest in Europe (a 2018 survey placed them as the sixth highest), but they are daunting all the same. They had prompted a passenger reduction of -4.5% in 2019.

In Apr-2022 Ryanair demanded the abolition of the environmental tax system in Stockholm and Gothenburg, which it felt was unfavourable to it, rewarding airlines based on the number of seats rather than on the actual CO2 emissions – which is the preferred EU measure.

Taxes are not demonstrably hampering the recovery right now, but that the industry has to stay ahead of the game in Sweden more than anywhere. Otherwise there is the potential for taxes to rise sharply, and no investor wants to see passenger numbers curtailed by even more factors that can be outside its control.

Overall, Swedavia’s current position, as indicated above, suggests that this might be a good time to examine a partial privatisation exercise. Ranged against that, though, is the reluctance across the entire Nordic region to engage in such activities.

In part two of this report CAPA will explore: that there has previously been little appetite for airport privatisation across the Nordic countries; Sweden's long term responsibility for a sustainable direction for the country's airports; and how the closure of Bromma Airport will ultimately put more pressure on Arlanda to expand sustainably. It will also consider why a partial privatisation should not just be limited to Sweden's main gateway.