No end in sight for Qantas’ international yield reductions; domestic yields on the improve

Qantas reported continued yield weakness in Oct-2009, total international yield continuing its slump, falling 27.2% (for the largest reduction in over 16 months) and indicating that there is no end in sight for the carrier’s international yield decline. However, domestic yields are showing signs of improvement, down by only 4.8%, for the smallest contraction since Jan-2009. 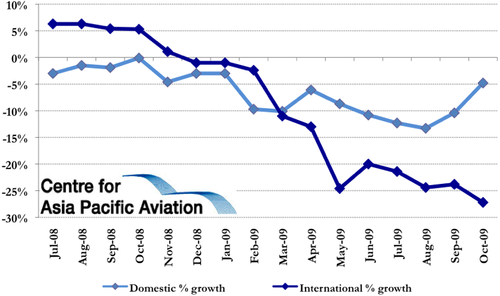 Earlier this month, Qantas CEO, Alan Joyce, stated the carrier was “not seeing an improvement in business traffic”, with yields “still depressed internationally”. Mr Joyce added that lower yields would ''take some time to wash out of the system” as the carrier still has “a lot of cheap air fares in our inventory”.

On a more positive note, Mr Joyce stated leisure demand is improving, enabling the carrier to increase its domestic fares, as reflected in the improved yield figures. This improvement is likely to continue, with Qantas and QantasLink increasing domestic fares by up to AUD10 a sector on 14 key routes from 01-Dec-2009, the largest increase for the Group since the start of the global financial downturn in 2008. The Group stated the increase was ''just part of our periodic review of fares''.

Importance of Jetstar shining through 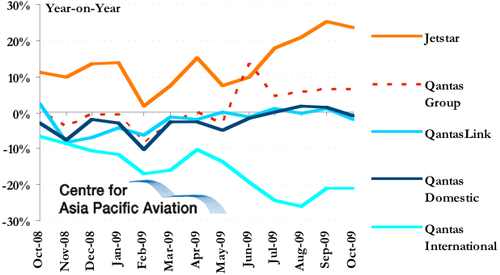