No end in sight for Qantas' international yield reductions 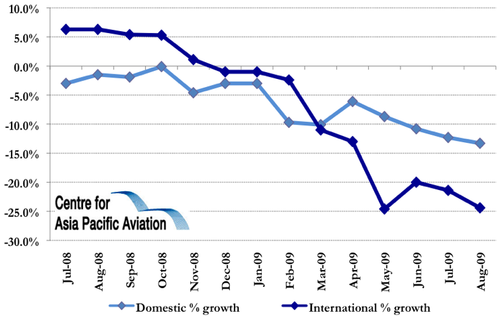 Qantas, at the beginning of Sep-2009, stated its yields had stabilised, with absolute numbers "tracking sideways".

Qantas sees no recovery in sight

Qantas Chairman, Leigh Clifford, in the carrier’s 2008/09 Annual Report released last week, stated the global economic outlook remains “uncertain”, with the carrier yet to see any substantial recovery in underlying business conditions. Mr Clifford added many factors are in play that could affect the timing of the recovery and uncertainty is "also being created through significant capacity increases, domestically and internationally, by Qantas Group competitors, some of whom enjoy very favourable taxation and other arrangements”.

However, Mr Clifford stated the carrier is well placed to weather the downturn and to take advantage of opportunities when a recovery eventuates. An improvement in the airline's yields should signal an economic recovery is under way.