airberlin plans to look at growing its operation in Asia and expand into Latin America as it starts to explore synergies with oneworld partners. The German hybrid carrier is slated to formally join oneworld in 1Q2012, opening up international network opportunities through new codeshares as well as expansion of its own long-haul operation.

Ahead of formally joining oneworld, airberlin has already started codesharing with American Airlines and Finnair. The carrier plans to soon turn on codeshares with British Airways and Iberia and will start to forge partnerships with other oneworld members once it formally enters the global alliance early next year.

In Asia there could be opportunity to work with all three existing oneworld members from the region – Cathay Pacific, Japan Airlines and Qantas Airways – as well as incoming new members Malaysia Airlines and Kingfisher Airlines. These potential Asian partnerships could also help support the expansion of airberlin’s own Asian network, which is now limited to Bangkok and the Maldives along with seasonal service to Phuket.

airberlin aims to partner with LAN to improve Germany-LATAM connections

airberlin could hook up in Miami with LAN, which links Miami with several destinations in Argentina, Chile, Ecuador and Peru. But this would potentially duplicate the Latin American network airberlin is building with American, which also serves all these destinations from Miami. A more appealing alternative would be for airberlin to hook up with LAN in Europe, thereby allowing its passengers to avoid the hassle of clearing US immigration in Miami.

LAN already serves Frankfurt, Madrid and Paris. The potential benefits of such a tie-up are much greater in Frankfurt as airberlin has relatively small operations in Madrid and Paris, where it serves Orly airport while LAN flies into Charles de Gaulle.

airberlin currently operates its own flights to Cancun and several destinations in the Caribbean, including Puerto Plata and Punta Cana in the Dominican Republic, Varadero in Cuba and Montego Bay in Jamaica. But it currently does not operate to any destinations in Central or South America. A tie-up with LAN would make such flights more appealing. airberlin’s long-haul hubs are Berlin and Dusseldorf so there would be no overlap with LAN’s gateway in Frankfurt.

In Asia, airberlin currently only codeshares with two independent carriers - Hainan Airlines and Bangkok Airways. Hainan and airberlin partner on Hainan’s Beijing-Berlin service while Bangkok Airways offers airberlin passengers onward connections throughout Thailand and to other countries in Southeast Asia. With oneworld, there will be an opportunity for airberlin to hook up with several other carriers in Bangkok without overlapping at all with the existing Bangkok Airways codeshare. For example, Air Berlin could potentially work with Qantas on the kangaroo route via Bangkok.

Once it formally joins oneworld, airberlin may also look at launching services to existing or future oneworld gateways in Asia such as Hong Kong, Kuala Lumpur, Mumbai, Delhi and Tokyo. At the very least some of these gateways should be added via new codeshares. Of these five gateways, airberlin now only has a codeshare to Delhi on Finnair via Helsinki.

Currently less than 1% of airberlin’s own capacity is allocated to Asian routes. The carrier has a bigger presence in North America and the Caribbean, where just over 4% of its total capacity is directed. In North America airberlin now serves New York, Miami and Los Angeles in addition to Cancun and the previously listed Caribbean destinations.

Mr Nagel says most of the capacity that has been added this year is to airberlin’s three US destinations, a decision driven primarily by its new codeshare with America. Overall, capacity growth at airberlin is modest this year and, according to Mr Nagel, in line with the European average as the German carrier wants to be “cautious” in the current environment.

Mr Nagel says for now airberlin is limited in its ability to expand its long-haul network in Asia or to Latin America due to aircraft availability. airberlin’s long-haul fleet consists only of 13 A330s, according to data from Ascend. It currently has 18 B787s on order, according to Ascend data, but deliveries of the new type are not slated to begin until 4Q2015.

Mr Nagel says airberlin has been looking at potentially acquiring more A330s as an interim solution but says securing A330s in the current market is “hard but not impossible”. airberlin has a much larger medium-haul network, with B737 and A320 family aircraft used to serve several points in North Africa and Turkey as well as Tel Aviv in Israel and Erbil in Iraq. The A330s are used mainly to serve destinations in Asia, North America and the Caribbean although the long-haul fleet is also used for some of the Tel Aviv flights, to Mombasa and Windhoek in sub-Saharan Africa (both only served only once per week) and to Dubai in the Middle East (currently served three times per week).

airberlin unveiled plans in Jul-2010 to join oneworld, a major milestone as the carrier adjusts its model to pursue more corporate traffic. The acceptance of airberlin’s application to join oneworld triggered the start of an 18-month implementation process. Mr Nagel says airberlin’s target date for joining is now early 2012.

As soon as it was announced as a new oneworld member, airberlin began working on implementing a codeshare partnership with American and Finnair. The codeshares with American and Finnair began only three months later, allowing airberlin to begin enjoying some of the benefits of being aligned with the two oneworld members over a year before formally joining the alliance.

Earlier this week American and airberlin announced their codeshare would be extended effective 24-Jun-2011 to airberlin’s new Berlin Tegel-JFK service, which was launched at the beginning of last month. Even with the new route airberlin currently only has a 6% share of the Germany-US market, according to Innovata data. With American's own flights to Germany only giving it a 1% share in the Germany-US market, oneworld will have a 7% share in this market. This is paltry compared to Star’s current 76% share (includes Lufthansa with 53%, United with 14%, US Airways with 7% and Singapore Airlines with 2%). 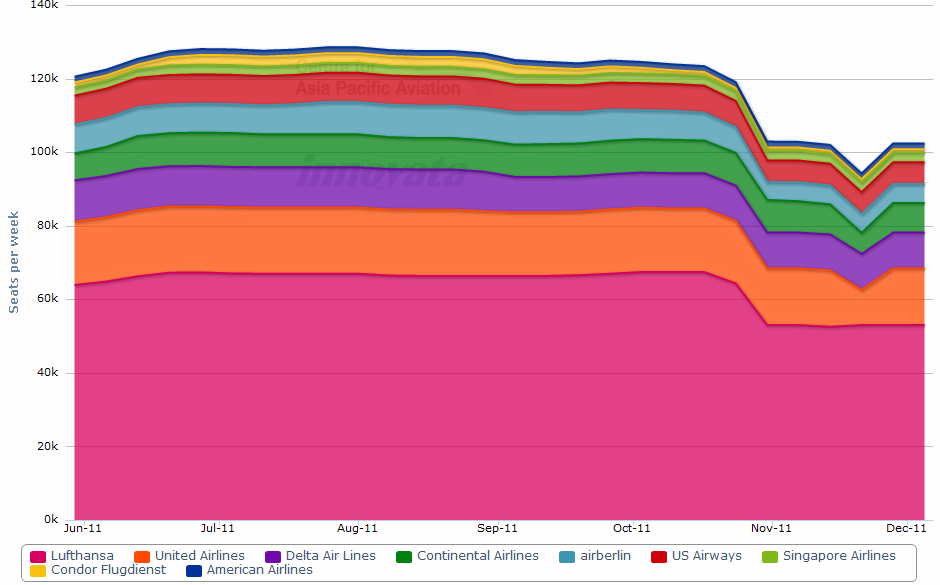 In another key albeit smaller long-haul market, Germany-Thailand, airberlin currently has a 17% share compared to a 19% share for Lufthansa and 62% for another Star member, Thai Airways. 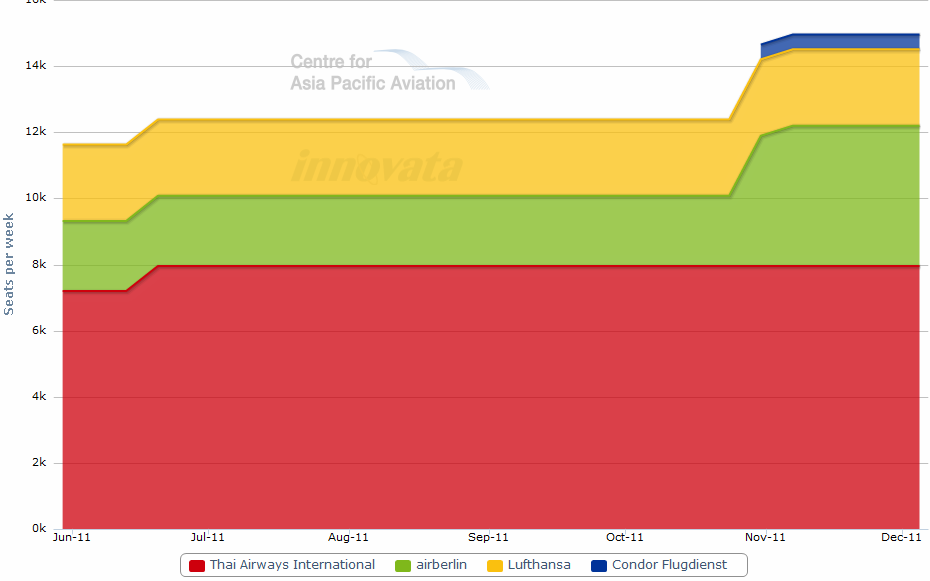 Mr Nagel expects for airberlin to begin forging codeshare arrangements with other oneworld members once it formally enters the alliance early next year. He points out airberlin already codeshares with Russia’s S7, which formally joined oneworld in Nov-2010, as part of a longstanding partnership which dates back to 2008. That only leaves on airberlin’s potential codeshare list Hungary’s Malev along with all of oneworld’s members in Asia and Latin America.

Mr Nagel says as part of airberlin’s new strategy of pursuing partnerships globally, airberlin plans to also explore new bilaterals with airlines outside oneworld, supplementing its current arrangements with independent carriers Bangkok Airways and Hainan Airlines. “oneworld tend to be more liberal in what codeshares you can have,” Mr Nagel points out, but adding the initial focus for airberlin will be to forge relationships with other members of the global alliance.