Côte d’Ivoire’s new national carrier, Air Côte d’Ivoire, has been formed in a partnership with Air France and the Aga Khan Fund for Economic Development (AKFED) and is due to launch international services by the end of Jul-2012 and domestic routes later in the year.

The Côte d’Ivoire Government will control 65% of the carrier with another 20% controlled by Air France and the remaining 15% held by AKFED through an airline holding company, Aérienne de Participation-Côte d’Ivoire. Initial capital was set at XOF2.5 billion (USD4.9 million) and will rise in the short term to XOF25 billion (USD48.6 million).

State ownership will reportedly drop to 51% once the capital raising is complete, with private investors taking the 14% stake in the airline. Air France initially was to control 35% of the carrier, but in early 2012 AKFED agreed to take a 15% stake.

The hope is that the founding of the airline will be a watershed for aviation in the small West African nation, which has been without a national carrier since the bankruptcy and collapse of Air Ivorie in 2011.

The carrier will focus on passengers and cargo destinations around West and Central Africa, regions that remain drastically underserved but in the past two years have seen considerable growth in both intra-Africa and intercontinental markets.

Partnerships to bring benefits to start-up

The relationship with Air France will come with benefits in the form of strategic cooperation. The two A319s Air Côte d’Ivoire plans to launch operations with were reportedly sourced from Air France, with the carrier also providing technical advice to the start-up. Air France operates from Paris CDG to the Cote d’Ivoire’s largest city of Abidjan.

Agence Francaise pour le Developpement, the French agency for development, is also involved in the partnership through Air France.

The new airline will also develop “technical, commercial and operational synergies” with Air Mali and Air Burkina, both airlines controlled by the AKFED Group. AKFED has been highly active in promoting air transport in West Africa for the past few years, a testament to the significant economic benefits aviation brings and aviation’s hand-in-hand relationship with GDP growth, which Africa in recent years has been enjoying in large rates.

AKFED has placed itself in aviation via its Celestair group, which also encompasses Air Uganda. It has been trying to get into the aviation market in Mali for several years, having sought a stake in Air Ivoire in 2007.

It has not yet been revealed whether Air Côte d’Ivoire will formally join Celestair, but the carrier will “benefit from cooperation” with Air Burkina and Air Mali. The three African airlines will collaborate "in order to build an economically viable long-term model”, including codesharing and pooling resources, beneficial tactics that tend to evade carriers in other small markets in the world.

The two carriers have small fleets and relatively tight networks, primarily limited to West and Central Africa, although Air Burkina does operate a service to Paris Orly. Air Mali was formed in 2005 through a partnership between IPS (51%), the Government of Mali (20%) and Mali-based investors. It operates a small fleet of four aircraft – three MD-80 family aircraft and a single CRJ200 – on a network encompassing 11 international and four domestic destinations. Air Burkina was privatised in 2001, with AKFED taking majority control (88% as of 2011). The carrier operates a fleet of five aircraft.

Air Côte d’Ivoire appointed René Décurey as CEO. Mr Décurey was formerly at Meridiana (now Meridiana Fly), where he served as VP business development for AKFED. AKFED controls 17.6% of Meridiana, having originally been set up by the Aga Khan, Prince Karīm al-Hussaynī, in 1963. Mr Décurey also served as an executive at Air Europe.

Air transport around the small nations of West and Central Africa is still underdeveloped, even by African standards. Nigeria, followed by Ghana, forms the lynchpin of the regional market as well as the major hub for long-haul intercontinental travel. The World Bank has cautioned that many of the smaller regional flag carriers posses mismatched fleets for their purpose and networks that are sub-optimal for sustainable development in the region, as evidenced by the spate of collapses in the region. Poor regulatory frameworks and ground infrastructure are significant challenges for airlines in the region.

Cooperating with the Celestair carriers, Air Cote d’Ivorie hopes to build itself into an economically viable carrier in the long term. With backing from Air France and AKFED, it has a pair of strong and experienced backers who will provide invaluable support.

Initial international destinations will reportedly include Brazzaville, Libreville, Douala, Accra, Cotonou, Ouaga, Conakry, Dakar and Bamako. Local destinations are yet to be set, but could include Bouake, Yakro, Korhogo, Man, Odienne, San Pedro, Bouna and Bondoukou.

Cote d’Ivorie’s initial focus on regional routes rather than domestic ones is reflective of the market. While Nigeria has 145,000 weekly domestic seats (69 million available seat kilometres), its three largest domestic routes are of considerable distance. The largest, Lagos-Port Harcourt has a distance of 620km while the second largest, Lagos-Abuja, is 725km and the third largest, Port Harcourt-Abuja, is 660km. In comparison, the distance between Côte d’Ivoire’s two largest metropolitan areas, Abidjan and Bouake, is only 350km.

The largest origins of international seats to the Côte d’Ivoire are West Africa, accounting for 67% of seats, and Europe, with 19%. 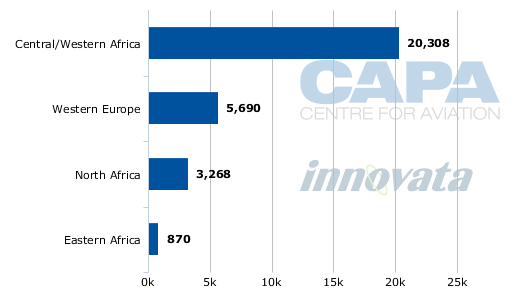 Senegal Airlines is the largest carrier into the country followed by Air France, Togo's ASKY Airlines and then Emirates (with service to Dubai via Accra, with capacity thus accounted for under West Africa). 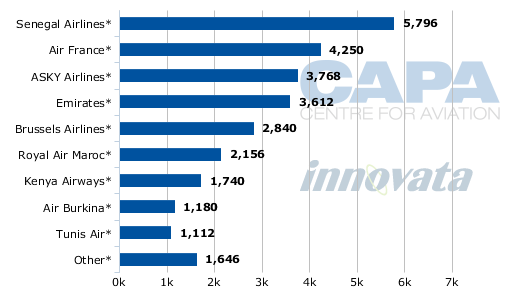 Domestic opportunities are limited and so Air Côte d’Ivoire is rationally focussing on regional services, and could be expected to serve neighbouring countries, which in some instances (Senegal, Togo) see service from those countries' carriers. While these regional services may not attract the attention of long-haul flights, they are deeply what the region needs most to stimulate trade and GDP growth. Air Côte d’Ivoire’s launch will follow a number of other recent regional growth stories, and will be most welcomed.