Jakarta is one of many major cities and regions, along with Manila, Sydney, Istanbul, Mexico City, Beijing, Ho Chi Minh City, Mumbai, Bogotá, Phnom Penh, Jeju, and central Bangladesh among others where second or replacement airports are either under construction or on the drawing board.

Jakarta’s Soekarno-Hatta International Airport (JSHIA) was the world’s 17th busiest airport in 2017, with (according to the Indonesian Ministry of Transportation) 60.25 million passengers (+8.1%). The airport rose by five places up the rankings, which was the joint biggest rise in the top 30 airports.

The recent upturn in passenger traffic has added to the urgency of identifying the best site for the new Jakarta airport but a variety of factors have to be taken into account, and a previously selected – then discarded – site may again find favour.

One of the two state-owned airport operators, Angkasa Pura II (APII), is believed to be reconsidering plans to develop a new airport in Karawang, West Java, to alleviate congestion at Jakarta’s Soekarno-Hatta International Airport (JSHIA). The single runway airport was first proposed in 2011 and Japan International Co-operation Agency has previously been in discussions with the Indonesian Government to develop the Karawang airport.

JSHIA was the world’s 17th busiest airport in 2017 with 60.25 million passengers (+8.1%) and rose by five places up the rankings, the joint biggest rise in the top 30 airports.  That annual figure, originating from the Ministry of Transportation, was later published by Airports Council International as 63.01 million, +8.3%.

The trend is now once again positive, and APII said in 2017 that it expected the 100 million ppa figure to be reached by 2021; that would clearly require exponential growth, however, and it later revised the estimate to 2025. It will also be determined by foreign airline interest. Currently only 14% of seat capacity is on non-Indonesian airlines. 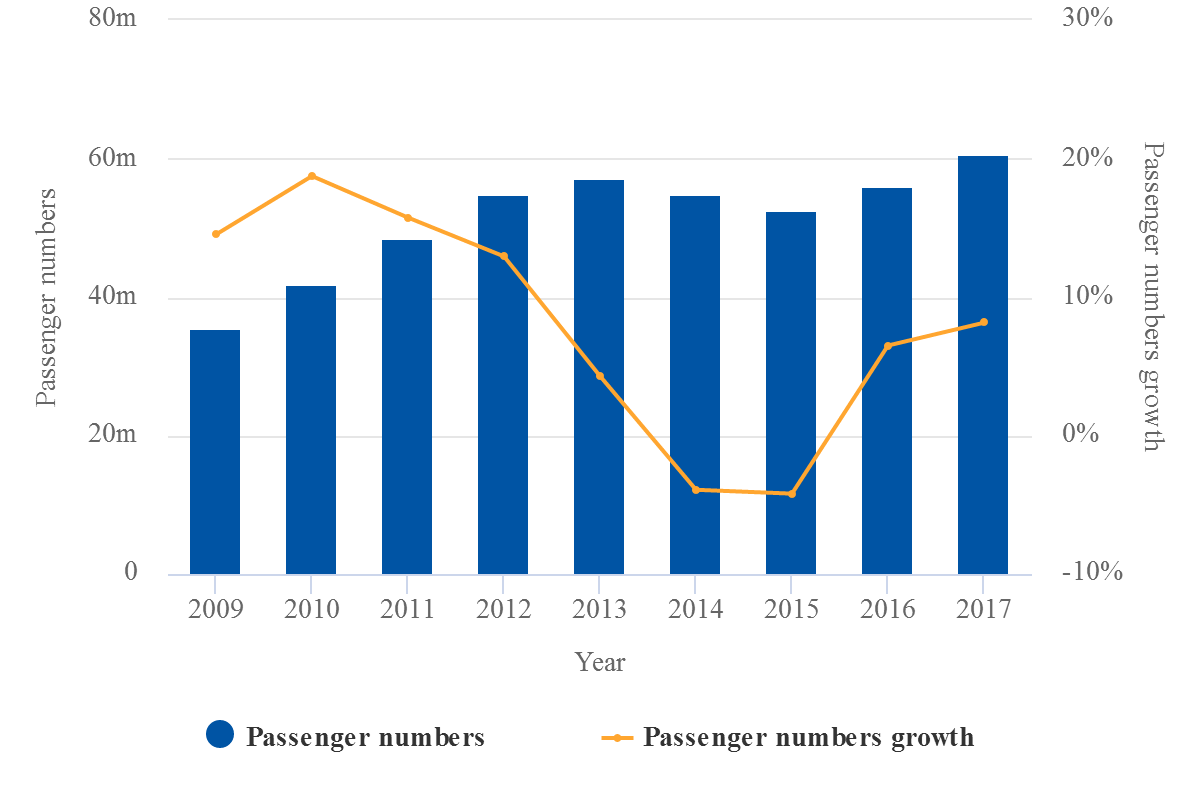 Much of the growth is coming internally. With 216 million people, Indonesia is the world’s fourth most populous country and in 2016 it also recorded the world’s fourth largest middle class, with 19.6 million households. That is expected to rise to 23.9 million in 2030, making this group a prominent consumer force in the country. While there are many airports in Indonesia, JSHIA is the main domestic and international hub by far.

Growth is also coming from external tourism. As the chart here shows, tourism numbers and growth have been rising consistently since 2009 (6.3 million) and up to 2017 (14 million). While much of the leisure tourism is directed towards beach resorts in the province of Bali, business tourism is centred on Jakarta and JSHIA is the gateway to other business centres. 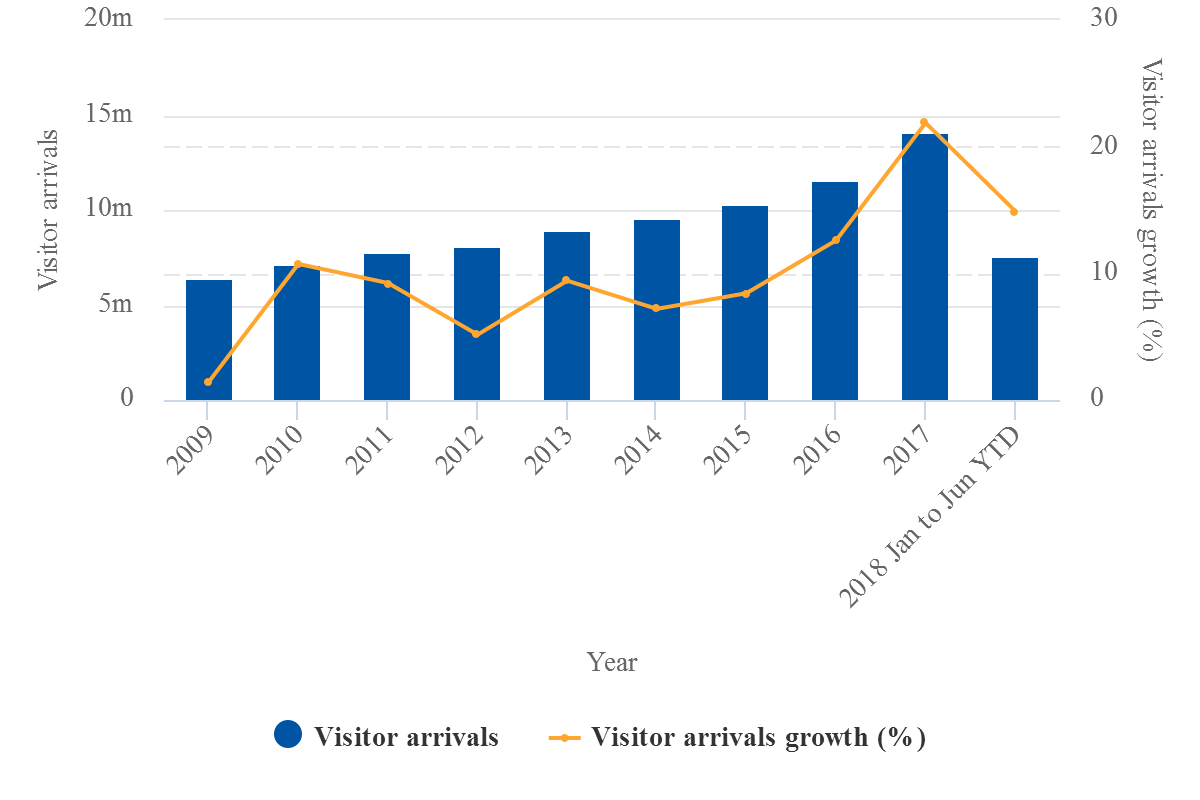 APII has previously stated that investment to 2023 will total IDR94.9 trillion (USD9.5 billion) to cope with the soaring aviation business growth across the archipelago, and that the majority of the investment will go to JSHIA, with the remainder for airports in the largest island, Sumatra.

The investment in JSHIA will mostly be in the construction of a fourth terminal and third runway, the revitalisation of Terminals 1 and 2, infrastructure to increase flight traffic and expansion of the taxiway.

The construction of the fourth terminal is expected to be completed by 2022  and the revitalisation of Terminals 1 and 2 should be finished in 2020. The company will start construction of the third runway in this third quarter of 2018, and the work is expected to be completed in 18 months. A new cargo handling facility will also be built, capable of handling 1.5 million tonnes per annum – doubling the current capacity.

The redevelopment of Terminals 1 and 2 will come by way of conversion into dedicated low cost carrier terminals (LCCTs) and work has started. T1 will become a domestic LCCT and T2 will become an international LCCT.

Apart from extending JSHIA, the government has been progressing plans to develop “JSHIA 2”.  The question has been: “where?”

Halim Perdanakusuma Airport, the joint civil/military facility located in East Jakarta, was once the country's primary international gateway and now acts as an overflow facility for JSHIA, mainly handling domestic services. It is not considered suitable for expansion.

Initially (from 2011), the location was going to be Karawang, approximately 40km to the east of Jakarta (see map), and it was to be operational by 2020.

Then the Transport Ministry opted for an alternative site some 10km from JSHIA because the Karawang site is part of a conserved forest. As recently as Aug-2018 the Minister of State Owned Enterprises said the government “is progressing plans to develop the New Jakarta Airport”, and that the IDR100 trillion (USD6.83 billion) project is due for completion in 2024.

Relationship of Karawang to Jakarta 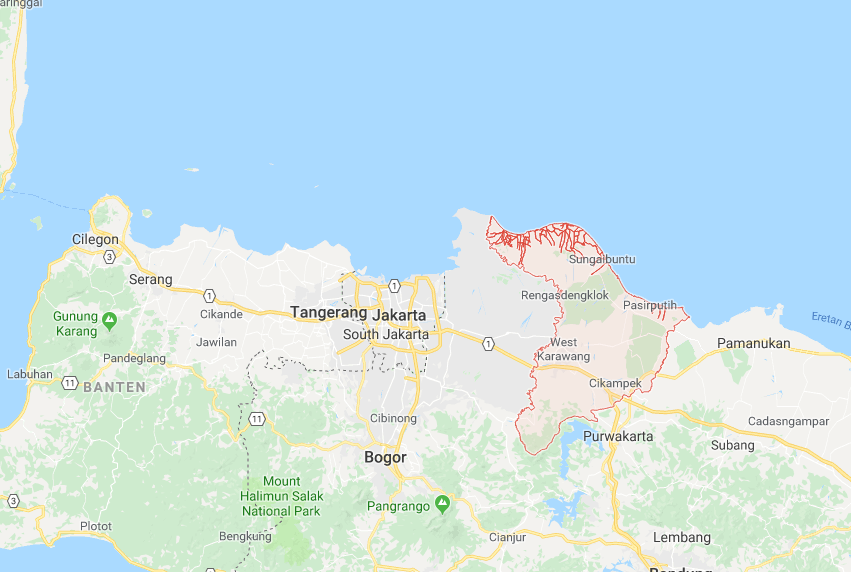 The previous month, though, it was revealed that APII is reconsidering plans to develop a new single runway airport in Karawang, and for the same reason – to alleviate congestion at JSHIA.

Perhaps the almost USD7 billion cost of the preferred alternative, on top of the expenditure at JSHIA and other airports – in all totalling over USD17 billion – is the reason. And that 60 million passenger figure in 2017 hides the fact that the overall seat capacity in that year was actually 87.25 million seats, almost suggesting a load factor of less than 70% and plenty of leeway at JSHIA yet, from the airlines’ perspective at least.

Or perhaps Japan International Cooperation Agency has returned with another proposal. Or perhaps it is Sydney’s decision to go for a smaller, mainly low-cost airport as the secondary one that was influential.

Or it could be all – or none – of these things.

At the end of Aug-2018, the Ministry of Transportation stated it has not received any official proposals for the development of a new Jakarta Airport. Angkasa Pura I’s technical director Polana Banguningsih added she has received courtesy calls from the private sector in respect to the project but no official proposals have yet been lodged.