Aircraft deliveries to accelerate in 2011. Led by Ryanair, Air China and Turkish Airlines

Aircraft deliveries are set to accelerate in 2011, with more than 1,400 aircraft scheduled for delivery this year, up from 1213 in 2010. Fleet expansion will be led by Ryanair, Air China and Turkish Airlines, all of which will take delivery of more than 30 aircraft by the end of 2011, based on Ascend data. Asian carriers will take delivery of the most aircraft of any region, as was the case in 2010, followed closely by Europe. LCCs and carriers in emerging markets are driving the expansion trend. 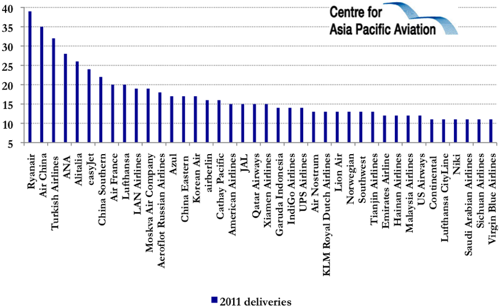 Source: Centre for Asia Pacific Aviation & Ascend
^ based on the greatest number of aircraft on confirmed delivery

According to IATA in its Nov/Dec-2010 Financial Monitor, released in Jan-2011, 1400+ deliveries are scheduled to the world's airlines for 2011, equating to just under 120 per month. This highlights an acceleration of the global fleet, following just under 100 aircraft deliveries per month in 2010. IATA added that aircraft utilisation rates are now returning to more normal levels which will likely further push up overall rates of capacity growth in the year to come.

Airbus delivered a record 510 aircraft in 2010 and booked 644 gross and 574 net aircraft orders while Boeing delivered 462 aircraft, slightly ahead of its target and reported 625 gross and 530 net orders.

Asian carriers will take delivery of the most aircraft in 2011 with a 32% share of total, or 452 aircraft to be added. Europe follows closely behind with a 31% share of the 1416 aircraft scheduled for delivery worldwide in the year. North America has a much smaller 11% share of total orders.

2011 aircraft deliveries due by region 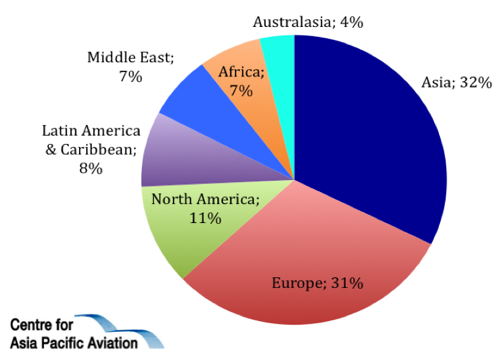 North America to see reduction in deliveries in 2011 from 2010 levels. But fleet renewal ahead

However, this will likely change in the years ahead, as US carriers renew their ageing fleets and streamline their mixed fleets – often as a result of consolidation activity. North American fleets are among the oldest in the world (at an average fleet age of 17 years), trailing only Africa and Latin America/Caribbean, but equal to Europe (which also includes developing nations in Eastern Europe).

Source: Centre for Asia Pacific Aviation and Ascend Based on Jan-2011 data

In mid Jan-2011, Delta Air Lines CEO Richard Anderson stated the carrier plans to order 100 to 200 narrowbody aircraft with options for a further 200 aircraft in an agreement that may become the largest in commercial aviation history (currently Jan-2011's MoU by IndiGo Airlines for 180 aircraft). A request for proposals went to “several” manufacturers in Dec-2010 and deliveries to Delta may commence as soon as 2013.

Meanwhile, Virgin America in mid Jan-2011 announced a firm order for 60 new A320 aircraft to be delivered 2013 to 2016, including 30 of the A320neo – the first commercial order for the new eco-efficient engine option. This formalises and expands an initial commitment made at the Farnborough International Airshow in Jul-2010. With this order and growth from other sources, Virgin America's fleet will more than triple, from 34 to 111 aircraft by 2019. 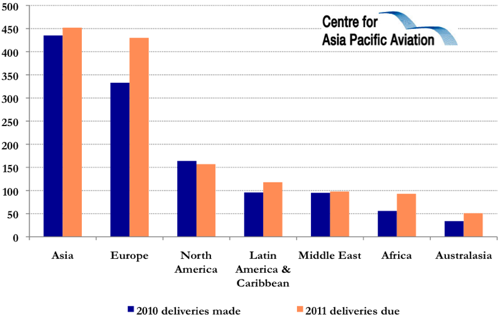 Meanwhile, Middle Eastern carriers have significant fleet orders in the next few years. Emirates has the largest order book for widebody aircraft in the world and will require more than USD28 billion in financing through to 2017 -nearly twice the amount it raised since 1996. Airbus and Boeing together have outstanding orders for 137 aircraft from Qatar Airways, 103 from Etihad Airways and 200 from Emirates, according to Ascend.

As always, aircraft financing remains a key concern for airlines, with many airlines having significant financing requirements.

Emirates, which has 12 confirmed deliveries for aircraft in 2011 and a total of 203 aircraft on order, this month stated it had raised USD4.6 billion in aircraft financing over the past two years amid tight lending conditions following the global downturn. The Dubai-based airline has successfully lined up credit to finance 30 widebody aircraft delivered during the period. Emirates, which will take delivery of two aircraft per month on average over the next six years, is reportedly seeking to borrow USD1 billion through a revolving- credit facility at present.

The issue of export credit financing

Emirates has been forced to hit back at its European rivals who are claiming the region's airlines have expanded through global subsidy. The overall share of aircraft deliveries covered by government guarantees more than doubled to 34% in 2009, according to Airbus and Boeing. Air France has stated the US Export-Import Bank arranged USD2.3 billion worth of financing agreement to Middle East airlines, a 200% increase from 2006 as export credit agencies stepped up assistance to foreign airlines during the global financial crisis. More than 100 airlines receive this sort of funding.

According to Emirates, in its "Subsidiary – Myths and Facts" document, of the USD22 billion in aircraft financing over the past 14 years, 13% (or USD2.9 billion) has come from US ExIm financing, with EU ECAs contributing 10% of the total financing amount (or USD2.3 billion), and that this ratio was “likely to remain in this range in the future”, according to the carrier. US Export-Import Bank Chairman and President Fred Hochberg similarly commented that “about 20% of the Emirates and Etihad fleets has been provided by export credit agencies both in Europe and the US”. He continued: “Some airlines have used us to a lesser extent and many have used us to a far greater extent”.

Emirates aircraft funding: Sources of financials over the past 14 years 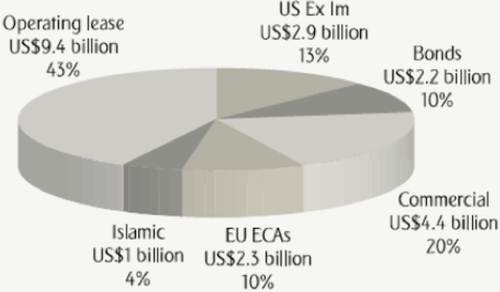 Source: Emirates in its Subsidy. The myths and facts about Emirates and our industry Document

Also in the Middle East, Etihad has issued requests for proposal (RFPs) to finance seven aircraft for delivery this year. The carrier plans to nearly triple its fleet within 10 years, will require USD13.3 billion from financial institutions.

IPOs on the rise

Meanwhile, a number of carriers that have large aircraft orders, such as Flybe and Garuda, have conducted or are conducting IPOs, to help diversify funding sources as the economic environment and equity market conditions strengthen.

Global airline share prices rose strongly during 2010, on aggregate ending the year up 28% over the 12 months, according to IATA. Share prices for US airlines were up more than 31% over this period, those in the Asia Pacific by 27% and European airlines by 21%. These are much greater rises than the 12% seen in the broader market Global All-Cap index, indicating that financial markets are taking a positive view on airline financial prospects. 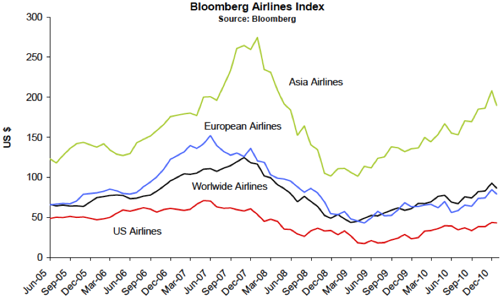 A number of other carriers are also considering listing. IndiGo, for example, is considering an IPO to finance its recent USD15.6 billion aircraft order with Airbus for 180 A320s, while GoAir, also in the Indian market, is similarly planning an IPO to fund its fleet expansion. Meanwhile, AirAsia X is planning a European and Asian listing to fund its fleet expansion, with the carrier planning to triple its fleet to 35 aircraft over the next six years. Mesxico's InterJet and China's Spring Airlines are also considering IPOs in the next couple of years.

Many full-service carriers have shored up their balance sheets by a mixture of institutional capital raisings and stock issuances, as well as securing large amounts of reasonably inexpensive debt amid the global financial downturn. In 2011, a number of carriers, such as US Airways and United Continental, have announced aircraft financing plans through the offering of bonds, notes and/or trust certificates.

Ryanair – the world’s largest international carrier keeps on getting bigger

Ryanair, already by far Europe’s biggest LCC and the largest international carrier in the world, has 39 aircraft scheduled for firm delivery in 2011. The carrier plans to increase its fleet from 256 B737-800s to 299 of the aircraft type by Mar-2013.

Chinese airlines in ‘golden’ era for aviation. China to have highest number of deliveries in 2011

Air China, one of the "big three" Chinese carriers, has 35 aircraft scheduled for delivery in 2011, while its Shenzhen Airlines subsidiary has 19 aircraft scheduled for delivery this year. Air China is benefiting from the booming local economy and the population's rising propensity to travel. This has resulted in what many industry participants see as the beginning of a “golden” era for Chinese aviation. 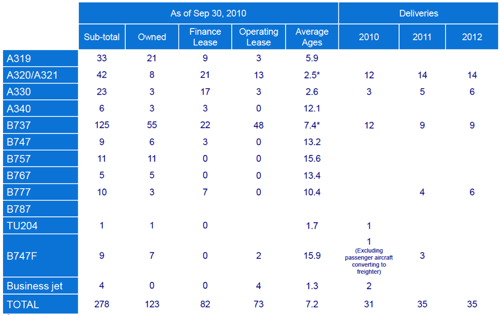 Shenzhen Airlines fleet and fleet plan: as at 30-Sep-2010

Chinese airlines occupy nine of the Top 50 spots globally for total aircraft scheduled for delivery during 2011 - more than any other country. Hong Kong-based Cathay Pacific also ranks in the Top 20. USA has seven airlines in the top 50 spots, followed by Germany (3), Russia (3), Japan (2), India (2) and Brazil (2).

In Jan-2011, CAAC Vice Director Wang Changshun stated Chinese carriers would introduce 290 new aircraft and retire 67 aircraft, for a net increase of 223 aircraft this year, 13.9% more than 2010. Mr Wang added that the CAAC would support fleet renewal plans, but urged airlines to adjust fleet capacity to market demand. China’s aviation industry introduced 187 new aircraft in 2010, 40 less than initially forecast, for a total fleet of 1604 at the end of 2010.

Turkish Airlines to increase capacity by 29% in 2011. To add 32 aircraft to support growth

In Europe, fast-expanding Turkish Airlines has 32 aircraft on order for delivery in 2011. The carrier expects a 20% increase in passenger demand and a 29% capacity increase in 2011 and plans to add at least 11 new destinations to its network. Long and medium-haul operations remain the carrier’s priority, as well as increasing destinations to Europe.

The carrier expects to handle 35 million passengers in 2011, a third of them transit passengers, up from a total of 29.1 million in 2010.

During 2010, Turkish Airlines’ fleet reached 153 aircraft, with an average age of 6.5 years. 11% of the aircraft are owned, 49% are operating under financial lease and 41% under operating leases. The carrier, in its Dec-2010 investor updated, released the following fleet and capacity plans for the next five years: 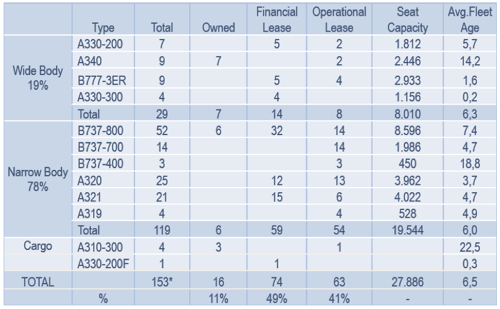 Rounding out the global Top 5 is ANA, which has 28 aircraft scheduled for delivery in 2011 (including 15 B787s, although this number is expected to be reduced by further production delays).

ANA is aiming to fill the gaps created by JAL’s network restructure and downsizing as part of its bankruptcy rehabilitation, while seizing growth opportunities created by airport expansion in Tokyo. ANA, which has become the largest carrier in the Japanese market, operated a fleet of 228 aircraft at the end of 2010.

In Jan-2011, ANA commented that preparations are under way for the commencement of flights using the B787. Until then, more B767-300ERs will be added on international routes and B787-800s on domestic routes. The carrier stated "work is being done to secure production volume to meet the recent increase in demand".

Meanwhile, Alitalia has 26 aircraft expected for delivery in 2011, including 20 A320s and six A330s. With the addition of three new A320s in Dec-2010, the carrier has taken delivery of 21 new aircraft since Jan-2009, including two A330s for long-haul operations. The renewal plan of the Airbus fleet for medium and long haul operations will continue in 2011. The carrier had a total operating fleet of 150 aircraft at the end of 2010.

LCCs and carriers in the emerging BRIC – Brazil, Russia, India and China – will continue to drive fleet (and capacity and network) growth in 2011, based on the number of aircraft on confirmed delivery for the year. Other key regions and economies seeing rapid growth prospects – such as Turkey and Latin America – are also boosting their fleets.

Carriers from other emerging markets such as Turkey, Indonesia and Latin America, such as Turkish Airlines (32), LAN (19) and Garuda Indonesia (14), Lion Air (13) and Copa (14) are also expanding rapidly in 2011 while a number of the major network carriers continue to acquire aircraft as they add capacity back into their network in 2011 and replace their ageing fleets.

^ based on the greatest number of aircraft on confirmed delivery