Virgin Blue shares were down 4.6% yesterday, after the long weekend in Australia. The carrier today announced plans to further increase international services operated by subsidiary, Pacific Blue, between Australia and New Zealand, with new Sydney-Queenstown, Brisbane-Dunedin and Sydney-Wellington from Sep-2009. The carrier also plans to reduce domestic capacity by approximately 1%.

The announcement comes just a week after Virgin Blue's short-haul international offshoot, Pacific Blue, announced new services from Brisbane and Sydney to Hamilton, and occurred on the same day that rival, Jetstar, commenced domestic services in New Zealand, including services from Auckland, Christchurch, Queenstown and Wellington.

Elsewhere, Air Berlin's shares were also down, by 2.2%. Europe's third largest LCC plans to hold its annual shareholders meeting today. Also in Europe, Ryanair shares fell 0.2%, while easyJet shares were up by 0.5%.

NB: All these carriers all feature prominently in The Centre’s forthcoming LCC Outlook 2009 report.

Among the major US LCCs, only Southwest reported a slight share price reduction of 0.2% on 09-Jun-09, with Allegiant, AirTran and JetBlue all up, by 2.3%, 2.9% and 5.4%, respectively. This occurred despite New York oil prices closing above USD70/barrel for the first time since Nov-2008, on US dollar weakness and hopes of an economic recovery.

Also gaining on 09-Jun-09 was Vueling, up 6.3%. The carrier, which continues to proceed with its merger with clickair, reported an 11.8% traffic (RPKs) reduction in May-2009, in line with its fleet and network rationalisation process, but an improved load factor of 70.9% (+0.6 ppts year-on-year). Vueling has continued to provide an upbeat outlook for 2009 and expects to report its inaugural full-year EBIT profit in 2009, after reporting improved results in the three months ended 31-Mar-09 (1Q2009). 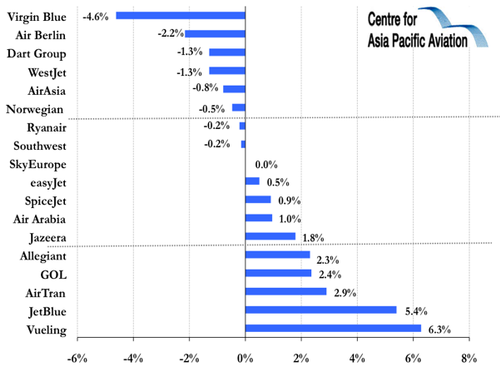