Network carrier-LCC cooperation becoming a trend in the US, Southwest to reduce workforce

Despite a rise in oil prices, shares in the listed US LCCs rose yesterday, as the broader stock market advanced and travel website, Priceline.com, predicted that Summer airfares could rise by as much as 25% (on average) on a year-on-year basis, not including add-on fees.

Shares in AirTran and JetBlue were the strongest gainers yesterday, rising 6.7% and 5.7%, respectively, while Allegiant’s shares gained 2.1% and Southwest’s shares were up 1.2%. US carriers will begin reporting first-quarter financial results next week, with the US LCCs to report results as follows:

As traffic continues its recovery in the US market, many of the larger US airlines are increasing cooperation efforts with LCCs to expand their network in a more efficient and effective way.

Earlier this week, GOL and Delta Air Lines filed a request for authorisation to implement a codeshare agreement with Brazilian and US authorities. The move will initially allow Delta to codeshare to more than 45 GOL services departing from Brasilia, Rio de Janeiro and São Paulo to other Brazilian destinations, as well as two GOL services between Brazil and Paraguay and Uruguay.

In late Mar-2010, American Airlines and JetBlue an agreement to collaborate at key East Coast gateways, under which American intends to transfer eight slot pairs at Ronald Reagan Washington National Airport and one slot pair at Westchester County Airport to JetBlue, which will in turn transfer 12 slot pairs at New York JFK to American. The agreement will provide customers with interline service in non-overlapping markets, with the companies also planning to explore other avenues for commercial cooperation.

Delta is also reportedly in talks with WestJet. WestJet stated it is expecting to receive five daily slots at New York LaGuardia Airport from Delta if a slot agreement with US Airways and other carriers is approved by the US DoT.

Southwest Airlines CEO, Gary Kelly, stated the carrier is reducing its work force and will commence a hiring freeze in 2010, as part of efforts to reduce staffing levels.

In a CNBC-TV interview, Mr Kelly commented, “we're trying to reduce our total employment through attrition, and that's what's occurring so far this year". At the end of 2009, Southwest's work force declined 2% year-on-year to 34,726 employees. Mr Kelly added that market conditions are improving, with "very strong bookings in place for April, May, and hopefully June."

Meanwhile, Hudson Securities raised its price target for JetBlue from USD6 to USD8, and maintained its ‘buy’ rating. However, Hudson stated it expects higher fuel prices to have a slightly greater impact than improving revenue trends in the future. 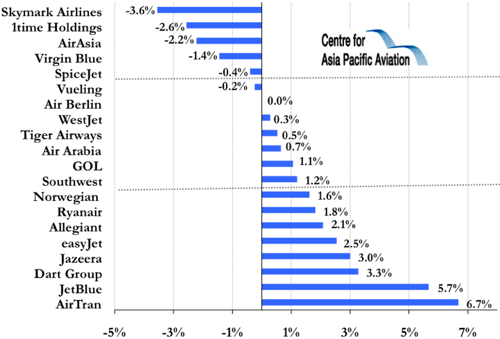