NAV CANADA reports that its traffic for the 12 months to 31-Aug-2010 fell by 0.8% year-on-year. The air navigation service provider measures traffic in weighted charging units, composite measure that takes into account the number of flights, aircraft size and distance flown in Canadian airspace. 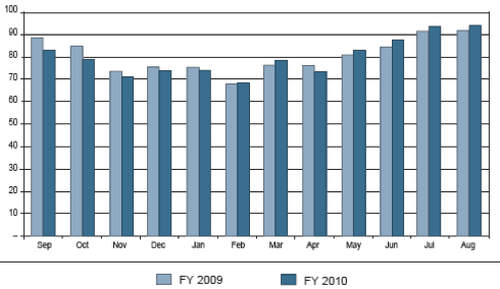 The downturn in traffic is unsurprising, given the slow recovery in airline traffic in Canada and the downturn in business and charter traffic that lingered through to the end of 2009 and the beginning of 2010.

Traffic has recovered slowly over the later part of this year, although the recovery was hampered somewhat by the Apr-2010 airspace closures in Europe, which cut an estimated 1% off the recovery in Canadian traffic. NAV CANADA President and CEO, John Crichton, estimated the loss of revenue due to the airspace closures at approximately CAD5 million. 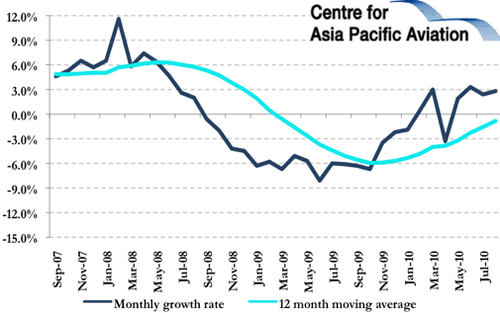 Traffic in Aug-2010 was up only 2.8% year-on-year, following growth of 2.4% in Jul-2010 and 3.3% in Jun-2010. If not for the Apr/May-2010 European airspace disruptions, traffic growth in the second half of the financial year would have averaged better than 3%. This was still not enough to compensate for the declines seen in FY2009, when traffic fell by better than 5%, including a 6.3% decline over the second half of the year.

The decline in traffic was mostly due to a decline in private and government traffic through the year, rather than weakness in commercial airlines. Canada’s major airlines have reported strong traffic through most of 2010, although Air Canada suffered from the effects of the European airspace closures more than WestJet. 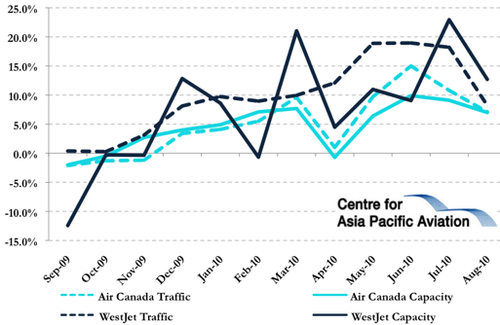 Transport Canada reports that raw aircraft movements in Canada between Sep-2009 and Aug-2010 declined 3.1% year-on-year. Commercial aircraft movements were up 0.2% in Aug-2010, the only category that reported positive momentum. This comes despite the failure of Skyservice, Canada’s second-largest charter carrier, at the end of March-2010.

Itinerant movements (airport to airport traffic) fell 2.8% in Aug-2010, a sign that the industry has not fully recovered even though the major carriers continue to increase passenger numbers and capacity. Only 45 of the 93 Canadian airports served by NAV CANADA reported traffic growth. 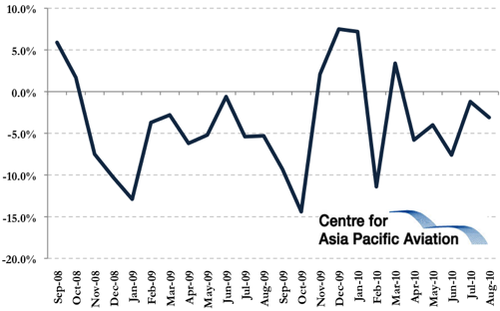 The question of charges

NAV CANADA stated in Jul-2010 that it will continue to actively monitor economic and industry conditions and intends to make a decision with regard to service charges during autumn.

As aircraft movements recover, NAV CANADA can more easily recover its costs and may be able to hold off increasing charges. The ANSP generates more than 95% of its revenue from air navigation service charges, which have been static since late 2007. 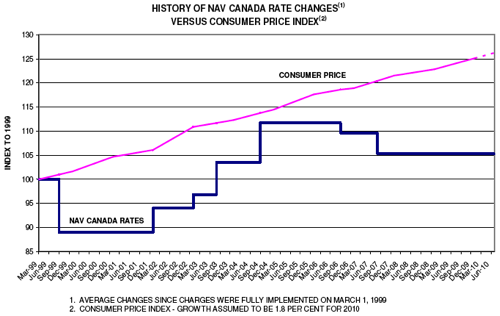 Over the first half of its fiscal year, NAV Canada’s air traffic service charges declined 4.4% year-on-year to CAD522 million down CAD22 million on the same period in the previous year. This comes on top of a 5.9% decline in revenue from service charges in FY2009.

Even with the decline in traffic, the ANSP has been able to keep revenue almost steady and charges stable, attributing this to strong cost management and a reduction in discretionary spending. NAV CANADA expects total revenues for the full year, before it takes rate stabilisation into account, to be down approximately 1.5% to CAD1,163 million. Third quarter revenues were down just CAD2 million on the previous year.

NAV CANADA stated in Jul-2010 that it will continue to actively monitor economic and industry conditions and intends to make a decision with regard to service charges during autumn. The ANSP cut unit charges by 1.8% in Sep-2006 and then by another 3% in 2007. It also added a temporary 1% cut in 2007, which it made permanent in 2008. The continuation of these cuts is estimated to have reduced costs by close to CAD30 million over the past two years.

The National Airlines Council of Canada - which represents members including WestJet, Air Canada, Air Transat and Jazz - released a study this month arguing that cutting changes to taxes and charges could lead to an increase in passenger traffic of 2.1 million to 2.7 million p/a. The report recommended that NAV CANADA be reimbursed for its annual costs for servicing the CAD1.5 billion debt it took on when it was privatised in 1996.

Even if it does not increase charges, NAV CANADA has been pushing hard to diversify its revenue base and minimise costs, setting itself up in a better position to handle any future traffic downturns. The recent acquisition of Searidge Technologies and the new contract with Allstream will help the ANSP keep charges at a level that will satisfy its customers. As traffic returns, the revenue pressure on NAV CANADA will continue to ease.