Myanmar National Airlines (MNA) aims to extend its new international network to Hong Kong and Taipei by the end of 2015. Multiple destinations in mainland China are planned for 2016 as the rebranded government-owned carrier expands its new 737-800 fleet to four aircraft.

MNA began a new chapter on 17-Aug-2015 with the resumption of international services after a 22 year hiatus. MNA currently serves Singapore and 26 domestic destinations throughout Myanmar.

MNA will have to overcome challenges in all its new international markets, including fierce competition from foreign carriers with established international brands. But MNA is confident it can carve out a niche by leveraging its leading domestic network and a new distribution arrangement with Abacus.

MNA launched flights on 17-Aug-2015 to Singapore using a newly delivered 737-800 in three-class configuration (business, premium economy and economy). MNA, which was known as Myanma Airways until late 2014, is currently serving Singapore with six weekly flights and will add a seventh frequency in Oct-2015.

MNA had been entirely a domestic operator since 1993 but has been preparing for international services since committing to lease 10 737s from GECAS in early 2014. The first 737-800 was delivered in Jun-2014 and used the first two months to operate some domestic flights from Yangon to Mandalay and Nay Pyi Taw, the only three airports in Myanmar designated for international services.

MNA CEO Capt Than Tun told CAPA at the Singapore launch event that Hong Kong and Taipei will be the airline’s next international destinations, with services expected to begin in early Dec-2015. A second 737-800, which is slated to be delivered in Oct-2015, will be used to support the new Yangon-Hong Kong and Yangon-Taipei routes.

The MNA network plan has changed considerably over the last year as the carrier prepared for the arrival of the 737s. Singapore was not in the initial business plan and suddenly came to the forefront in Jun-2015 following a trip to Singapore by government officials.

Yangon-Singapore is an extremely competitive route that was already served by five carriers – Jetstar Asia, Myanmar Airways International (MAI), SilkAir, Singapore Airlines and Tigerair. As CAPA wrote in a 6-Jul-2015 report: “The Yangon-Singapore market is already experiencing overcapacity and Myanmar-based carriers have struggled to compete against their Singaporean competitors, forcing cutbacks at MAI and the withdrawal of Golden Myanmar Airways. MNA will inevitably face the same challenges in Singapore as other Burmese carriers, particularly given its brand is an unknown in the international market.”

But Singapore offered a relatively easy option for launching the carrier’s first international route as slots and traffic rights could be secured quickly. The civil aviation authorities of Myanmar and Singapore have enjoyed a close relationship for several years, providing a framework to facilitate MNA’s quick entrance into the Singapore market.

MNA has already been talking to authorities in Hong Kong and Taiwan for several months. Hong Kong at one point was envisioned as MNA’s first international route but securing traffic rights and slots from Hong Kong is a longer and more tedious process compared to Singapore.

Yangon-Hong Kong is a less mature market than Yangon-Singapore as non-stop flights from Yangon to Hong Kong only began in early 2013 from Cathay Pacific subsidiary Dragonair. The Hong Kong-based carrier initially served Yangon with four weekly A321 flights and increased the service to daily in Sep-2014.

In 2014 Dragonair carried 63,000 passengers to and from Yangon on 484 flights, according to Myanmar DCA data. This equates to an average load factor of 76%.

Hong Kong approval of MNA could come with more traffic rights and betters slots at Yangon for Dragonair. The Hong Kong-based carrier currently has a very late night arrival in Yangon and departure after midnight.

Hong Kong could potentially support more capacity from Yangon as it remains relatively underserved compared to other major Asian hubs. It is currently the eighth largest international destination from Yangon based on current seat capacity. 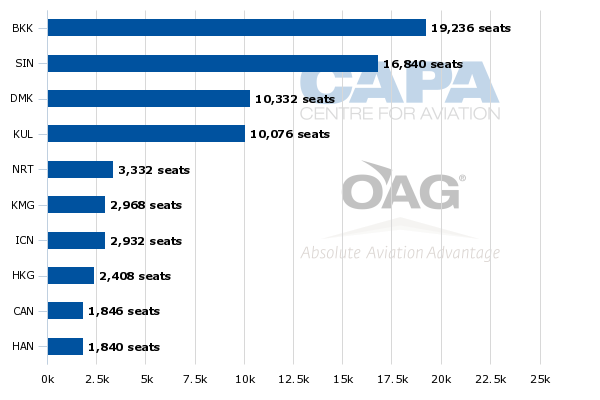 But MNA could face challenges competing against Dragonair as Dragonair has the benefit of offering connections beyond Hong Kong across the Dragonair and Cathay Pacific networks. Hong Kong is mainly a connecting and inbound market from Yangon. But the MNA brand is unknown in Hong Kong and MNA does not yet have any codeshares or interlines with other airlines.

CAL carried just under 70,000 passengers to and from Myanmar in 2014 with an average load factor of 74%. CAL currently operates five weekly 737-800 flights to Yangon but will revert back to its normal daily peak season schedule at the beginning of Oct-2015. Its inability to maintain a daily year-round service could indicate the Myanmar-Taiwan market may not be large enough to support a second carrier.

Taiwan’s EVA Air competed against CAL on the Yangon-Taipei route in late 2012 and early 2013. But EVA quickly realised the market was not big enough and suspended services to Yangon after only seven months.

EVA has no plans for returning to Myanmar in the near to medium term, believing the market is not yet mature enough to support multiple Taiwanese carriers. EVA could not make Yangon work even with connections beyond Taipei. Connections to Japan and the US, which are the third and fourth largest source markets for the Myanmar tourism sector, account for a large portion of passengers flying from Yangon to Taipei and Hong Kong.

While the local Myanmar-Taiwan market has grown since EVA pulled out two years ago, it is still relatively small. Myanmar recorded only 33,000 Taiwanese visitors in 2014.

Hong Kong is an even smaller source market for Myanmar while Singapore is only slightly larger. Singapore accounted for about 4% of total visitor traffic to Myanmar in 2014 compared to 3% for Taiwan. 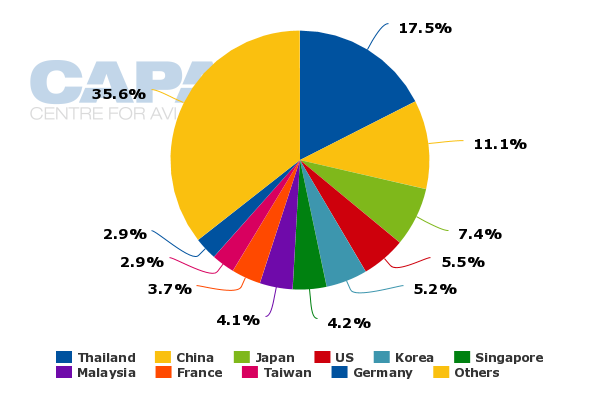 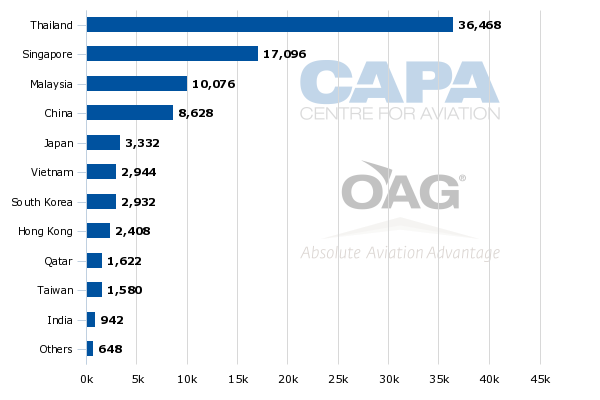 China is the second largest source market for Myanmar’s fast-growing tourism sector after neighbouring Thailand. There are opportunities for more capacity to China but MNA could face challenges overcoming competition from Chinese carriers. 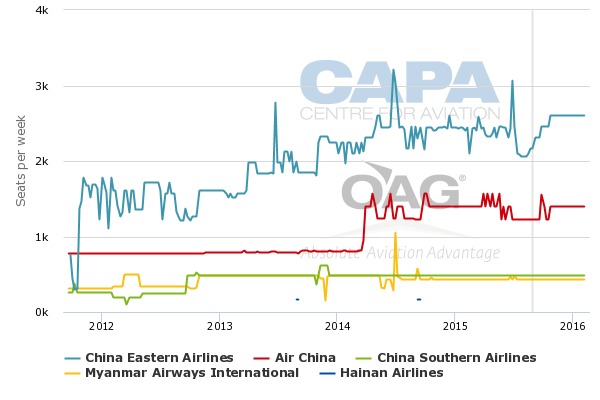 MNA could potentially launch flights to secondary Chinese destinations that are not yet served non-stop from Yangon. But it will need to work on developing relationships with Chinese agents and establishing its brand in China.

The three major Chinese carriers have strong relationships with Chinese agents and have the advantage of using their hubs to offer connections throughout China. MNA will have to focus on a few Chinese cities even if it entirely allocates its third and fourth aircraft to the China market. A partnership with a Chinese carrier would make it easier to penetrate the China market.

MNA will be keen to forge several airline partnerships as it continues its development. IOSA certification, which MNA plans to pursue once it has a few months of international operations under its belt, should make it easier to pursue partnerships.

A new distribution deal with Abacus should also help MNA raise awareness and generate sales in overseas markets. MNA was previously not in any GDS. It relied entirely on direct links with local agents in Myanmar.

Even for domestic tickets purchased abroad, overseas agents had to buy MNA tickets using local agents in Myanmar. Travel agents throughout the world are now able to view all fares and book tickets on MNA’s new international network across all three classes of service. But perhaps more significantly, the Abacus arrangement also opens up MNA’s domestic flights to a global distribution channel for the first time.

In the domestic market the tie-up with Abacus could give MNA an advantage over local competitors. MNA is the largest domestic carrier in Myanmar but competes against several carriers in the core tourist routes such as Yangon to Bagan, Heho and Mandalay. Over 90% of visitors to Myanmar fly in on foreign carriers but need to use domestic carriers to access the various sights.

MNA is also hoping domestic connections will give it an advantage in competing on its international routes. As foreign carriers do not have codeshares or interlines with any of Myanmar’s 10 domestic carriers, MNA will be the only carrier offering a single ticket from Singapore, Hong Kong and Taipei to secondary cities throughout Myanmar.

MNA is already promoting its domestic connections in the Singapore market. It is also considering offering a one-stop service to Mandalay by extending its Singapore-Yangon flight to Myanmar’s second largest city.

MNA currently serves the Yangon-Mandalay market using its regional aircraft fleet. The 737-800 has so far only been deployed to Mandalay on an ad hoc basis to support pilot training before the Singapore launch.

Permanently up-gauging some Mandalay flights to 737-800s would be difficult to sustain relying only on local passengers. But using the 737-800 on Mandalay flights that connect with Singapore, Hong Kong, Taipei and other new international destinations could be appealing as it would provide a convenient one-stop product to Mandalay while enabling MNA to improve utilisation of its new 737-800 fleet.

MNA has been transformed over the last year as the airline has raised its operating standards, upgraded its product, rebranded, introduced a new reservation system and website and began renewing its fleet.

MNA will continue to use ATR 72s and E190s on most domestic routes. The airline also currently operates two Beechcraft 1900s and two Cessna Caravans with another two Caravans on order. But Capt Tun said MNA will soon be split into two with a new general aviation operation taking over the smaller regional aircraft. MNA uses these aircraft to serve small domestic destinations that are generally not served by any of Myanmar’s private carriers or attract tourists.

The ATR 72-600s improve MNA’s domestic position and competitiveness as several private domestic carriers in Myanmar have already renewed their ATR fleets over the last couple of years. The 737-800 offers a step change as Myanmar carriers have not traditionally operated new jet aircraft.

Introducing new 737s and launching international operations is a major accomplishment given the prior outdated state of MNA as an airline and the former pariah status of Myanmar as a country. But the biggest challenges still ahead as MNA attempts to become commercially viable in the highly competitive international market.