Monarch Group - not absolute ruler, but on course to profit in FY2013 with strong turnaround

On 12-Jun-2013, privately owned Monarch Group published its annual report and accounts (for the year to Oct-2012) for the first time and issued a trading update for 1HFY2013. The group also says that, following a Nov-2011 re-financing, its turnaround strategy is on course to return the loss-making group to profit in FY2013.

Monarch Group, which includes tour operations and aircraft engineering in addition to scheduled leisure airline Monarch Airlines, is currently considering an order of up to 62 new aircraft for delivery up to 2024. Executive chairman Iain Rawlinson has recently denied that the company is seeking a public listing or new shareholders.

Nevertheless, the size of this planned aircraft order and the first-time publication of an annual report, which reveals an under-capitalised balance sheet, may well fuel speculation that the group is indeed considering just that.

The group’s balance sheet looks fairly weak, with negative shareholders’ equity. Its net debt at the end of FY2012 was GBP54 million (GBP2 million if restricted cash is also netted off against debt), but this does not take account of off balance sheet operating leased aircraft. Capitalising these at the rule of thumb eight times annual rental, the adjusted net debt figure is around GBP0.5 billion. The group also had a net pension liability of GBP140 million at the end of FY2012.

It seems that it owes its survival to the understanding and patience of its ultimate shareholder, Amerald Investments NV, a company controlled by the Mantegazza family. The FY2012 year end balance sheet includes GBP84 million in shareholder loans and GBP20 million in preference shares.

Monarch Airlines, the biggest group division, is responsible for the losses

The Monarch Group consists of three divisions: Monarch Airlines, Tour Operations and Monarch Aircraft Engineering. Group revenues increased by 9% in FY2012, with Engineering seeing the fastest growth (+15%). Monarch Airlines’ revenue grew by 11%, but it made an operating loss of GBP37 million (just over half the loss of the previous year). The airline’s operating loss before impairments and write downs was GBP19 million, narrowed from GBP59 million in FY2011. The other two divisions were profitable in both FY2011 and FY2012.

Monarch Airlines’ total passenger numbers grew by 5% in FY2012 and load factor gained 1.5 ppts to reach 85.0%, the second highest among scheduled UK airlines (behind easyJet). More than 80% of its capacity is scheduled as the carrier has successfully grown away from its charter operating past. According to a press release of 12-Jun-2013, total revenue per available seat kilometre (RASK) grew by almost 14% in FY2012.

The group announced limited details on trading in 1HFY2013 (Nov-2012 to Apr-2013) and Mr Rawlinson said: “The Group has made a satisfactory start to the financial year”. Total revenues increased by 12%, with Monarch Airlines’ revenues up 10%, Tour Operations’ revenues up 15% and Aircraft Engineering’s revenues up 17%. The Engineering division accounted for 14% of revenues in the half year, compared with 3% for FY2012, while Tour Operations 1H revenue was 23% of the total versus 35% for FY2012. This reflects the different seasonality of these two business areas, with tour operating stronger in the summer and engineering in the winter.

The group also said, in connection with 1HFY2013, that “Monarch Airlines has achieved good growth in passengers, yields and revenues, Tour Operations has exceeded its targets while Engineering has also had a solid start to the year. […] this performance underlines the substantial progress we are making towards our target of restoring the Group to overall profitability by November 2013.”

Monarch Airlines operates only international routes, with a single class cabin, focusing on leisure routes in the Mediterranean and ski routes in the Alps. Around three quarters of its seat capacity is to Western Europe, one fifth to Eastern/Central Europe and a small percentage to North Africa. It has six bases in the UK: London Luton, London Gatwick, Manchester, Birmingham, Leeds-Bradford and East Midlands.

Monarch does not have a very strong market share at any of its UK bases, most of which are fairly fragmented markets. Moreover, the major LCCs are key competitors at all of these airports. At Manchester, it is number two with 11%, behind Ryanair (14%) and just ahead of easyJet and Flybe on 11% and 10% respectively. It is also number two at Birmingham, with 23% of seats, just behind Flybe (also 23%) and ahead of Ryanair’s 18%. (Source: Innovata, week of 17-Jun-2013).

At its largest base by seats, Gatwick, it is the number three carrier with 7% of seats, behind easyJet (45%) and British Airways (17%). At Luton, home to its head office, it is the fourth biggest airline, with 8% of seats, behind easyJet, Wizz Air and Ryanair. At Leeds-Bradford it is third with 9%, behind Jet2.com and Ryanair, and it is fourth at East Midlands, behind Ryanair, Jet2.com and Flybe. (Source: Innovata, week of 17-Jun-2013). 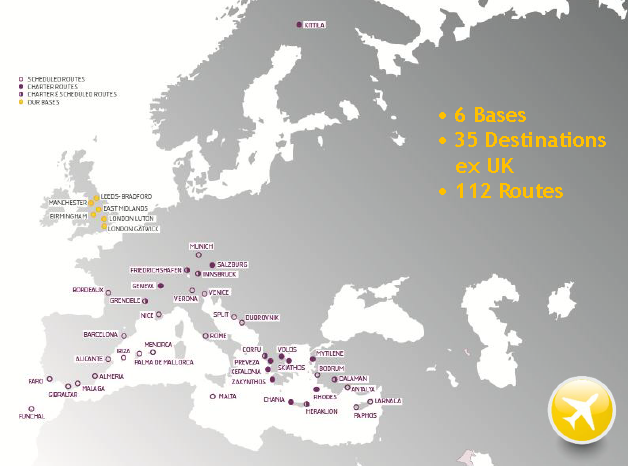 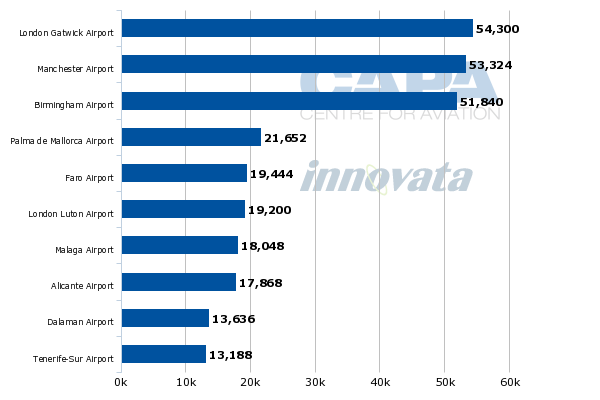 Monarch Airlines has leading positions on a number of its routes

Monarch’s top 10 scheduled routes by seat capacity all involve destinations in Spain (including the Spanish islands) and Portugal, reflecting its sun destination leisure focus. Although Monarch does not have strong market share overall at its six UK airports (it is not number one in any of them and is number two in only two airports – Manchester and Birmingham), it has a stronger position in many of its routes. Among its top 10 routes by seats, it is the number one airline on six (Manchester to Faro, Alicante and Tenerife Sur; Birmingham to Malaga and Palma de Mallorca). (Source: Innovata, week of 17-Jun-2013).

According to Monarch, its overall share of total UK traffic to its scheduled destinations increased year-on-year from 10.0% to 11.7%. Innovata data for the week of 17-Jun-2013 show it to be the UK’s fifth biggest airline by seats (behind BA, easyJet, Ryanair and Flybe) and the fourth biggest on international routes. 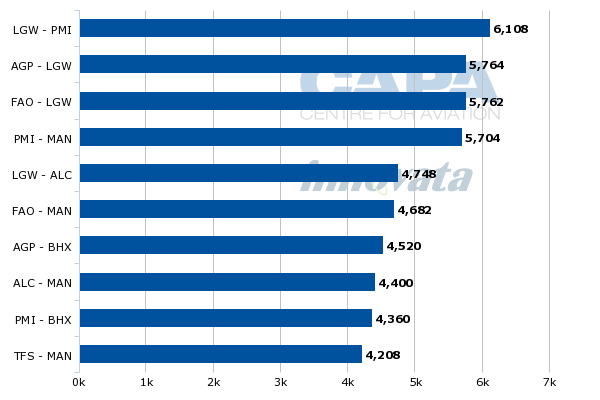 An order for 62 new aircraft

According to the CAPA fleet database, Monarch Airlines has a fleet of 38 operating leased aircraft in service at 17-Jun-2013. This includes eight widebody aircraft and 30 narrowbodies. The fleet is ageing, in particular the widebodies, with an average age of 26 years for the 757s, 23 years for the A300s and 14 years for the A330s. The A320 family has an average age of 11 years, but has taken delivery of two new A320s and two new A321s in 2013 so far, as replacements for retired aircraft.

Monarch intends to make a decision by the end of the current financial year on an order for 62 aircraft, for delivery up to 2024, both for replacement and expansion. It is considering all major manufacturers for the fulfilment of this planned order. Traditionally, Monarch finances its aircraft through operating leases and, if it does not seek fresh equity capital, looks likely to continue to rely on leases and shareholder loans/preference shares. 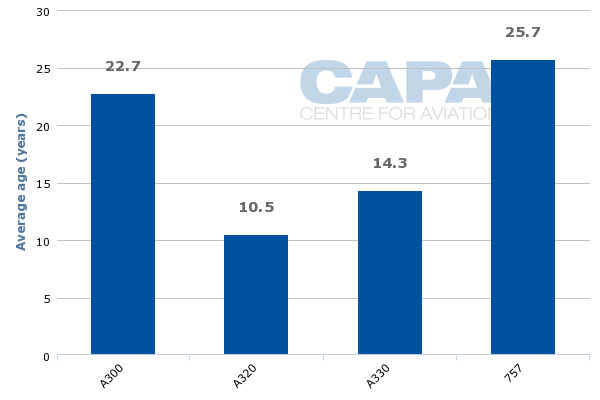 CASK is consistent with LCCs, but not ultra-LCCs

Monarch’s press release of 12-Jun-2013 states that Monarch Airlines’ RASK in FY2012 was GBP3.97, equivalent to EUR4.99. This figure, together with the airline’s reported revenue and operating result, can be used to calculate its cost per available seat kilometre (CASK). The chart below shows CASK against average sector length for Monarch Airlines and other European airlines.

This demonstrates that its unit costs, adjusted for distance, are broadly comparable to LCCs such as easyJet and Vueling, but are higher than those of ultra-low-cost carriers such as Ryanair and Wizz Air. One or both of Ryanair and Wizz Air are significant competitors at all of Monarch’s UK airports and easyJet is also a major player at a number of them. All three of Wizz Air, easyJet and Ryanair are bigger than Monarch in terms of destinations, routes and passenger numbers and the latter two operate to the same kind of leisure destinations as Monarch (and a good deal more).

It is a challenge for Monarch to compete with either of them on network and virtually impossible to compete with Ryanair on costs. While Monarch has a number of strong market positions, it would be vulnerable to any aggressive expansion by other LCCs onto its routes. Moreover, its leisure focus may make it more sensitive to economic downturns, although this may be partially mitigated by the group’s presence in the typically more robust MRO segment. 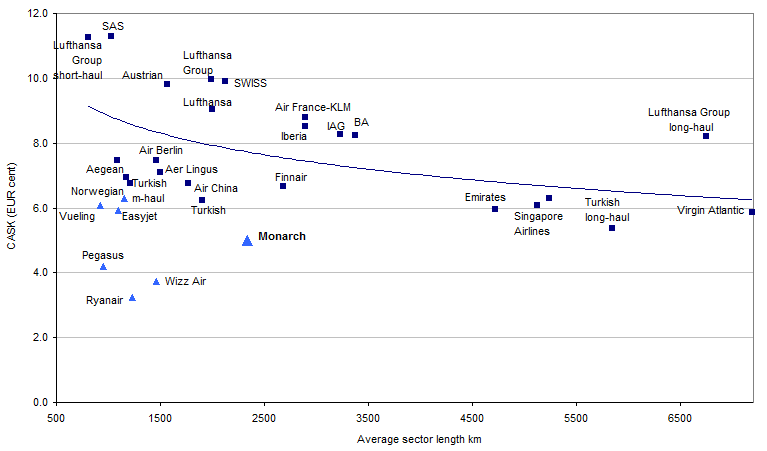