Mixed fortunes for Mexico’s LCCs, as market share surges past 40%

The intense struggle between the LCCs that sprung to life in Mexico in 2008 following the privatisation of the two national airlines, Mexicana and Aeromexico, seems to be taking shape.

While LCC capacity share on domestic services has been rising dramatically since 2007 to 42.5% in Jul-09 (Chart 1, below), the budget airlines share of international services has actually been declining over the same period, from 7% to less than 5% (Chart 2). 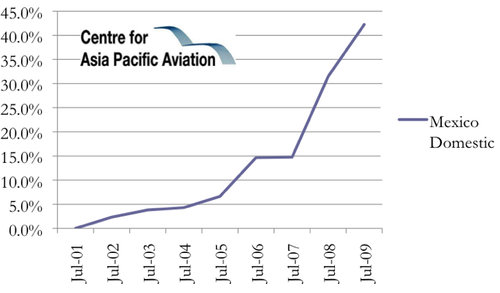 While LCCs like Viva Aerobus and Volaris have been introducing international service into US airports in Texas and California, others like Aviacsa have been finding the going tough and have entered into bankruptcy protection. 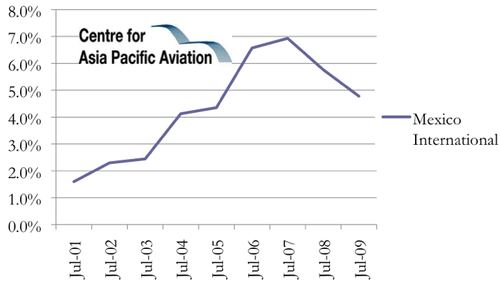 Chart 3 reveals how LCC capacity on services within North America, where there have been recent service additions by Mexican LCCs, but in the face of a severe decline since May-08 by both Mexican and US carriers, seems to have peaked out at 28% and has reduced slightly during the last 12 months.

Meanwhile, lurking in the background is the potential for the newly privatised Mexicana and Aeromexico to merge, which some believe would create an unacceptable monopoly situation. 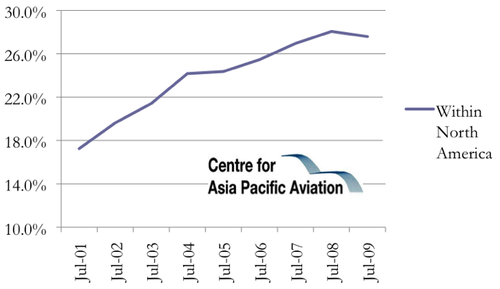 A relatively and potentially short-lived phenomenon

LCCs are a relatively new concept in Mexico, and one that was almost short-lived owing to the advent of high fuel prices and the subsequent global economic recession that has caused a significant drop in passenger numbers worldwide.

Several airlines, including Alma and Avolar, were grounded for lack of capital and credit, high taxes, safety reasons, and other negative factors and that was before the worst impact of the credit crunch was felt, let alone the onset of swine flu, which originated in the country and which played a large part in the traffic reductions averaging 25% experienced by airport operators GAP, OMA and ASUR in the three months to end Jun-09.

Despite these depressing figures the percentage of the population using air travel has expanded beyond the traditional 5%, the increase mainly driven by the LCCs, but not by as much as was anticipated. Traffic grew by 2% in 2008 to 35.5 million passenger journeys. And the two legacy carriers remain in control. Mexicana was the leader with 11.5 million passengers, followed by Aeromexico with 10.9 million.

However, the Mexican Government, pre swine flu, cautioned that Mexican carriers could report losses of USD1-1.2 billion for 2008. Little has happened since to change that opinion. Domestic airfares have been historically very high in Mexico and, although fares have descended on a select few number of popular routes, domestic fares overall continue to remain relatively expensive, notwithstanding government promises.

A combination of these factors was undoubtedly behind the recent grounding (for the third time) of the Monterrey-based LCC Aviacsa after the Ministry of Communications and Transport cited ‘irregularities’ with twenty-five (all but one) of the company’s aircraft which, it said, endangered ‘air safety, cargo and passengers’; and with air traffic control debts. Aviasca had shrunk from third largest Mexican airline to seventh largest since 2007. Subsequently (12-Aug), the Mexican Government was blocked by a judge from seizing the airline’s assets.

Aviacsa has reportedly entered into bankruptcy proceedings to renegotiate its debt with the hope of resuming operations by the end of Aug-09. Back in July, Aviacsa said it would request the Mexican Government for a loan of approximately USD23 million to pay off its debt and resume commercial operations. The airline's unions allege a ‘government mission’ to shut the airline down. Aviasca had been operating mainly domestic routes out of hubs at Monterrey, Mexico City, Guadalajara and Leon, with a single international service to Las Vegas, where no-one is betting on its survival.

Those LCCs that have been expanding their services internationally include Volaris and the self-styled ultra low cost Viva Aerobus. Volaris recently initiated services from Guadalajara and Toluca (30 miles west of Mexico City) to Oakland, the low cost airport in the San Francisco bay area. In Jun-09, it had already inaugurated its first international service to the United States with a nonstop Toluca-Los Angeles daily flight. Volaris also plans to launch Toluca-Fort Lauderdale service some time later this year, if not in 2010 when its code sharing agreement with Southwest (see Table) is expected to have a major impact on demand from both Florida and California to Mexico.

Viva Aerobus made its name in 2007 by offering, a la Ryanair,  to commence service from Monterrey, Cancun, Guadalajara and Leon to Austin, the state capital of Texas, but only if that airport (Austin Bergstrom) made available modern but Spartan, low cost terminal facilities. The airport authorities duly obliged by building the South Terminal, in a joint venture with GE, an unusual, groundbreaking deal for a US airport. Unfortunately, Viva Aerobus felt obliged to pull out in May-09, blaming the swine flu outbreak in part, and the South Terminal closed shortly thereafter.

That tells a story about attempts to sustain low cost US-Mexican air services, and Volaris must be wary to ensure that its California services don't go the same way. On the face of it there must be demand, such is the high number of Mexican immigrants into states like California, New Mexico, Texas and Arizona. But Mexican airlines seem to have exited western US routes almost as quickly as their US counterparts did before them. According to the San Francisco Chronicle, in May 2008 “there were no fewer than nine new and reconstituted airlines in western USA offering flights to more than 50 Mexican cities. Most required getting to a Mexican hub city, some of their Web sites were in Spanish only, and the sheer number of alternatives made determining which airlines offered the best routes and fares an online odyssey of Homeric proportions.”

But after a year of fuel cost hikes, a foundering worldwide economy and headlines about drug-related violence, just four of the nine Mexican budget carriers are still flying. Aerocalifornia was grounded in Jul-08 because of unpaid air-traffic-control fees. In Nov-08, financially strapped Alma suspended operations. A week later, Avolar was grounded for failing to pay air-rights fees. Aladia stopped flying in Feb-09 - all this before Aviacsa.

Of the remaining major Mexican carriers, at Jul-09 Viva Aerobus has 22 destinations, as has Volaris. Interjet has 21, and MexicanaClick, previously known as Click Mexicana and now Mexicana’s regional operator, has 28 destinations.

Remaining power of the legacy airlines

The domestic carrier capacity share is made clear in Chart 4, below, especially the remianing power of the privatised legacy airlines Mexicana de Aviacion and Aeromexico, both with 28%. Aviacsa’s share has been left intact for the moment. It is likely to be split between the legacy airlines and Volaris/Interjet, which are becoming the easyJet and Ryanair of Mexico. 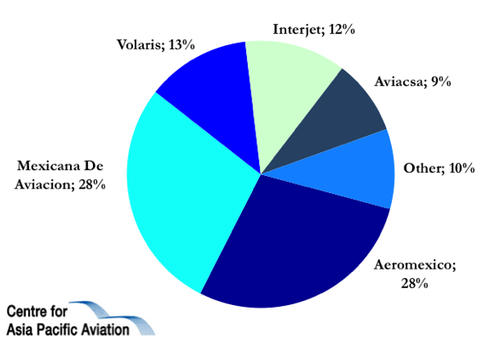 Persistent power of the US majors

Chart 5 makes clear the persistent power of the US majors in international markets to/from Mexico. This situation is replicated widely throughout Latin America, partly becaue of the disarray many of the national airlines there found themselves in, in previous years. Houston, Texas-based Continental actually has three percentage points greater share than Aeromexico, and American Airlines is only one percentage point behind. 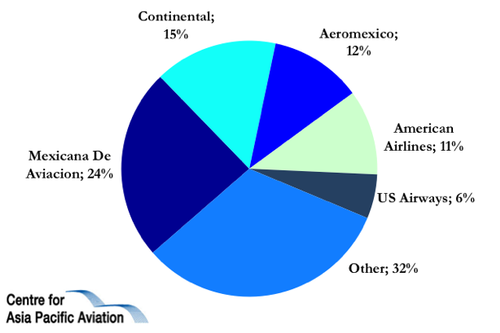 The potential for Mexicana and Aeromexico to merge is growing. The original Mexicana effort to acquire Aeromexico was denied by the Mexican Anti Trust Agency. In fact, the Mexican Transport Secretary has recommended that the two legacy carriers need to look for mechanisms to survive the global crisis – including the possibility of a merger. Both airlines are looking at the possibility of a merger or some kind of alliance which will reduce both airlines’ operating and financial costs. The original attempt to merge the two airlines was turned down by the Mexican Competition Commission but signs are it could happen before the end of 2009. Meanwhile, Mexicana and its LCC subsidiary accepted a formal invitation to join the oneworld alliance in 2009.

Adding his weight to the argument, Gaston Azcarraga, CEO of Mexicana, stated recently that a merger is possible, but it must be based on the two carriers being profitable. He called on the government to take action on lowering airport and other costs which make it difficult for the airlines to be profitable.

The general consensus amongst analysts in the area, such as Miami-based AV Group, is that Mexico needs a strong, healthy, efficient single major airline to compete with airlines from the United States and elsewhere. Chart 5 seems to support that theory.

However, Enrique Beltranena, CEO of the leading LCC, Volaris countered by stating, “From my perspective this is very dangerous. What is under discussion right now is the equivalent to a monopoly”.

As for fleet development, Mexicana took over the routes of Alma via subsidiary Mexicana Inter (later renamed MexicanaLink), which began operating out of Guadalajara in Mar-09 with the first two of what will be 13 leased Bombardier CRJ200s. At the end of 2008 Mexicana took delivery of two A330s. In Mar-09 it signed a lease agreement with Boeing for 25 B717-200s for the carrier’s Click LCC subsidiary to replace existing F100s. Under the multi-year leasing deal Click took delivery of its first B717-200 at the end of Mar-09.

Volaris added three A319s at the end of 2008 and is now adding 11 A320s. It currently operates 18 A319s and will add three more during the rest of this year.  The airline will continue with its growth plan of adding domestic destinations and is not considering any merger or consolidation plans. It is also planning to add service in conjunction with its equity-partner, Grupo TACA, to exploit its Toluca hub with connecting service to 19 Latin American countries.