Airports of Thailand gained 1.9% yesterday, after it reported passenger traffic fell 12.1% in Apr-2009, with cargo down 26.0%. International passenger traffic is still weaker than domestic traffic, which was down 10.9%.

May traffic highlights from Mexican airport operator, OMA, indicate the dramatic impact of swine influenza on Mexican traffic, with passenger numbers declining 39.7%, and international passenger numbers down by 52.7%. OMA’s share price was up 1.5% yesterday, indicating the results were probably better than the market had expected. ASUR, which operates nine Mexican airports (including Cancun, the country’s largest international airport), was up 0.6%. Its own traffic fell by 50.7% in May-2009. 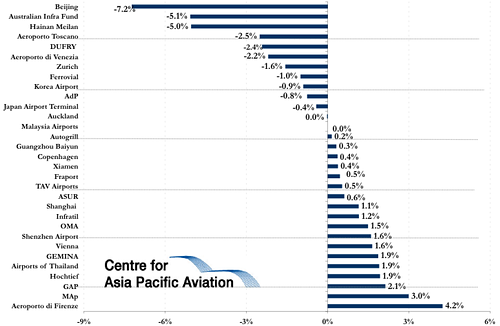