The Middle East is one of the most dynamic LCC markets globally. This report provides the latest strategic updates at some of the region’s early LCC movers, Air Arabia (Sharjah and Egypt), Jazeera Airways (Kuwait), flydubai (Dubai), nasair and sama (Saudi Arabia), and Bahrain Air (Bahrain).

Middle East LCCs grow to control 7% of the market

The LCC phenomenon in the Middle East is just six years old, commencing with the launch of Air Arabia in 2003. Since then, the model has started to bloom in the region, with a total of five more LCCs joining Air Arabia over the past four years.

Middle East LCCs currently account for approximately 7% of total intra-regional capacity (seats), a slight dip on 2008, as many of the region’s larger carriers have turned their focus back on the region in response to weaker demand in long-haul markets. This is expected to be temporary, as the region’s LCCs aggressively expand their fleets and networks in coming months (as documented in the remainder of this report). 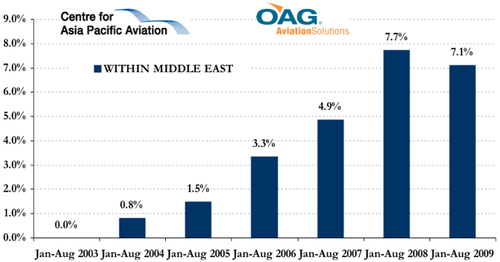 Intra-regional capacity (seats) share of Middle East LCCs (7%) is less than a third of the global average. 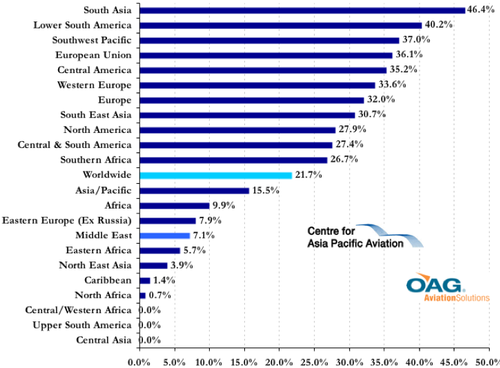 In the international market to/from the Middle East, capacity (seats) share of LCCs is even lower at around 6%. 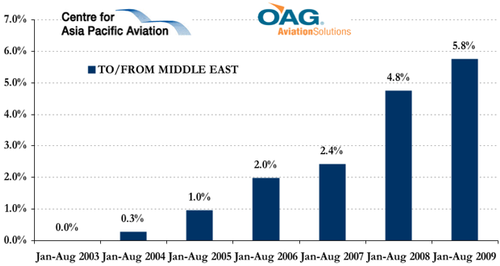 Mr Ali told Emirates Business 24/7, “there has been an 18% yield dilution in the Middle East basically because the capacity is more than the demand at the moment because of the recession…This is more severe than the global average yield dilution of 12%”. He added “in the Middle East, the demand is growing, but not as fast as the capacity is growing. Also because demand is growing, it becomes an attractive place for other GCC carriers and international carriers”.

Air Arabia recently stated it is not presently looking into a fourth hub, as it is too busy expanding operations from Sharjah, Morocco and Egypt. The carrier added it previously planned to launch a hub in India, but had been turned down due to ownership restrictions on foreign airlines. 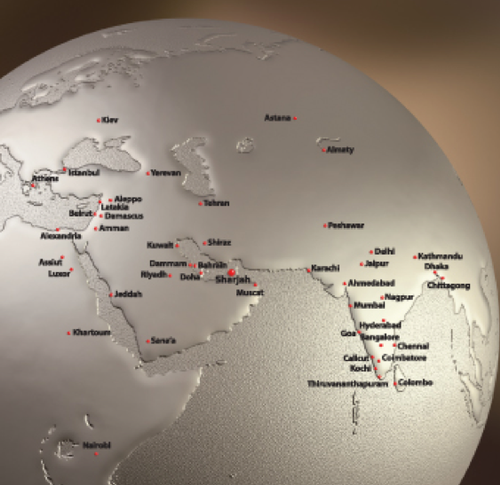 Mr Ali also revealed Air Arabia Egypt would launch operations in 1Q2010. Reports previously suggested operations could commence by late 2009. The start-up is a JV with Egyptian tourism company, Travco, which reportedly owns a 50% stake in the new LCC. Air Arabia has a 40% stake, with the remaining 10% owned by an Egyptian investor.

The start-up plans to operate from “multiple Egyptian airports” to destinations in Europe, Africa and the Middle East. Mr Ali stated that the new operation would link the Group’s Morocco and Sharjah bases, and provide more access to Europe, as well as offering links to the Gulf, both through direct services as well as via the Levant.

According to Mr Ali, Air Arabia needs to live up to its name and “the more people in the Arab World [that] can see us at every airport with a good network, the more we deliver the promise of the only Arab Airline to service the Arab World.”

Air Arabia Egypt has twin benefits of helping Air Arabia diversify its revenues and expand its catchment area, particularly as flydubai ramps up its operations in close proximity to its Sharjah base.

There are major opportunities on offer in Egypt. The country comes with no local LCC, a large tourist market from West and East, one of the few reasonably sized domestic markets in the Middle East/North Africa region, with a local population of over 80 million. There are over 15 secondary airports in the country, and the Air Arabia CEO also expects to generate traffic from the large Egyptian community living outside Egypt.

However, Air Arabia is competing with what Mr Ali labels as “high cost, low fares airlines”, ie state-owned carriers not driven by profit concerns, but rather national imperatives that operate with “no budget constraint”.

Mr Ali also stated the carrier has not determined where it will go next. There is still a significant amount of work needed to ensure that Air Arabia Moroc matures and grows, and the company is still in the midst of establishing its Egypt operations.

flydubai: More aircraft and destinations by the end of 2009

flydubai recently confirmed plans to add two more B737-800s to its current fleet of four by the end of 2009. The aircraft are all leased from GECAS and six more are due to be delivered in 2010.

The LCC currently operates to six destinations. flydubai launched services to Djibouti in early Sep-2009, and has since added services to Aleppo, Alexandria, Amman, Beirut and Damascus. Apart from the Dubai-Djibouti sector, the LCC competes on all the routes with Air Arabia (from neighbouring Sharjah).

flydubai also plans to launch twice daily Dubai-Doha service by mid Oct-2009 and up to eight new destinations by the end of the year. By 2014, the LCC plans to operate to 70 destinations within five hours flight time from Dubai. 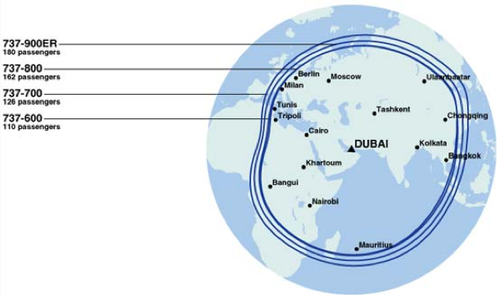 flydubai CEO, Ghaith al-Ghaith revealed the carrier plans to “grow as fast next year, as we have done since we launched, and even faster in 2011”. Targets include "niche markets were there is no existing competition", including destinations in India, the CIS and Russia.

This growth trajectory is particularly aggressive for a Middle Eastern LCC, and a reflection of Dubai’s overall approach to the development of its aviation industry. By comparison, Air Arabia has expanded its fleet to 17 aircraft in six years of operation (with another three operating under Air Arabia Maroc), while Jazeera Airways operates a fleet of ten A320s after four years of service.

Jazeera recently announced plans to establish a new hub in 2010 to increase its market share in the Middle East and North Africa. However, the LCC has ruled out establishing its second hub in a Gulf state. Mr Pichler stated that fierce competition within the GCC has made locations outside the region more favourable. Jazeera will announce the location of its second hub in the next six months.

In network news, Jazeera plans to increase Dubai-Bahrain frequency from three to four times daily and commence operations to Abu Dhabi by the end of Oct-2009. The LCC is also scheduled to launch services to Assuit, its sixth destination in Egypt, in Oct-2009.

In late Sep-2009, Jazeera announced plans to launch a new Business class fare across its network, as part of a strategy to attract more premium passengers. The carrier’s fleet of A320 aircraft has the first four rows dedicated to Business class guests, with each middle seat transformed into extra workspace. Jazeera Business offers complimentary lounge access, F&B onboard and a 60KG checked baggage allowance.

Jazeera has a vision to become a “multi-market, multi-hub and multi-class” operator. According to Mr Pichler, the Middle East market expects to be “offered an all-inclusive product…a certain level of service, and you can’t just neglect that”.

Saudi Arabian LCC, nasair, stated it is currently close to breakeven point and expects to reach this target in 2010. The LCC also aims to double the number of passengers to 1.5 million p/a by the end of 2009. From the end of 2010, the carrier expects to commence taking delivery of an order for approximately 30 aircraft, which, according to CEO, Walter Prenzler, “will be enough for the next five or six years”. According to Ascend date, nasair has current orders for 20 A319 and nine E190 aircraft.

nasair currently operates a fleet of 12 aircraft, covering a network of 13 domestic and 11 international destinations. The carrier also plans to add service to Khartoum in Dec-2009 and to launch services to India in 2010.

Saudi rival, Sama, stated it plans to acquire 20 new B737-800 or A320 aircraft over the next four years, with CCO, Kevin Steele, stating that to survive as an LCC, “you’ve got to be a 20 to 25 aircraft company”. The carrier, which currently operates a fleet of seven B737-800s, plans to make a fleet decision by the end of 2009. Mr Steele added Sama is considering all options to acquire the aircraft, including external financing.

In Aug-2009, Sama announced plans to expand its route network, for which an increased fleet would be required. The LCC currently serves eight destinations in Saudi Arabia and an additional seven in the Middle East. Sama stated it would consider new Middle East destinations. Mr Steele recently stated Egypt-Saudi Arabia is the largest intra-Middle East point-to-point market and the “question to any LCC is: Where will you put your investments?”.

Sama and nasair have approximately equal capacity share on the Saudi Arabia-Egypt sector, with close to 10% each. 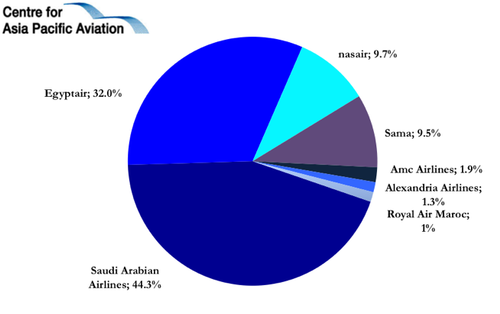 Bahrain Air, a hybrid carrier, announced plans in Sep-2009 to finalise the purchase of three Airbus aircraft this year – reducing its initial purchase plans from four aircraft. The carrier, which currently operates a fleet of eight A320/A319 aircraft, cited the global financial downturn and a financing delay in the purchasing process as key reasons behind the move to trim the order.

Bahrain Air previously announced it may require fresh capital amid the downturn from equity markets in the form of an IPO, placing its confidence in investment circles to fund its development and fleet expansion. The carrier announced earlier this year that it plans to conduct an IPO once its breaks even, which it considers likely by 2010.

Bahraini investors control 68% of the carrier, and Saudi investors own the remaining 32%. The carrier plans to sell “no less” than 45% of its shares, although the final size of the IPO will depend on local regulations.